For a long time I have thought of looking into the history of my house but it was always on my To Do List. At the GSQ annual seminar Top Genealogical Sources, which was held in October of this year,  I heard Annabel Lloyd from the Brisbane City Archives speak about the resources available to carry out research on your house and this motivated me to start the search.  The Brisbane City Council also has an excellent guide which provides lots of information to help you with your search.

I commenced by visiting the Titles Registry Office at 53 Albert Street,  Brisbane where I found the original Deed of Grant for ‘fifty five acres and one rood’ (which included the land on which my house was built). The 55 acres stretched between Frederick and Gregory Streets in Toowong and  was purchased by Jane Galloway on 2 November 1871. The title deed was signed ‘Normandy’ who was George August Constantine, Marquis of Normandy, the then Governor of Queensland. Imagine title deeds now being signed by the Governor!

Thomas O’Sullivan bought this land from Jane Galloway on 20 March 1884, four years after the Shire of Toowong was created on 20 May 1880. Thomas must have been what we would now call a developer as he commenced to subdivide the land in October 1885 and on 5 July 1887, four lots (Lots 57, 58, 59 and 60) were bought by Henry Walden.  On 11 June 1903, Lots 59 and 60 (which is the land on which my house is built) were transferred to Charles Walden a Toowong labourer who, presumably, was Henry’s son.

Lots 59 and 60 were subsequently owned by two other people and then on 30 April 1920 ‘Pauline Dorothea Vilhelmine Marie Larsen – Wife of Jens Peter Vilhelm Larsen’ bought these lots. She also took out a bill of mortgage with the Brisbane Permanent Building and Banking Company for £550.

I have looked through a number of catalogues of houses for sale at the time and the Allora design is the closest to the layout of my house. One of the customers of Redicut Homes which made these houses said  ‘I have placed my house so that the dining room and sitting room face the North, and we should not wish for a cooler, more comfortable home’. Our house also faces the north but when we bought it, there were no railings on the verandah and it was closed in with wooden shutters which meant any breeze was blocked. The Larsens may have chosen not to have verandah rails or the next owners replaced them.

The Allora was built by Campbell & Sons Pty Ltd and was one of Brisbane’s oldest builders established in the mid 1850s. They provided”

ready-to-erect homes which were pre-cut and assembled in their Albion timber yard, disassembled marked according to a detailed plan and packed with all necessary hardware and finishes for transportation to the customer, who could either erect the house himself of engage a Campbell & Sons construction crew as part of the package.[1]

This ready to assemble design could explain why the Larsens appear to have built the house the same year that they bought the land as Vilhelm Larsen is listed as living in Morley Street in the 1920 edition of Wise’s Queensland Post Office Directory; people were only listed in this Directory if they lived in a house.  Sadly Dorothea died a year later and the property was transferred to her husband.  His name is listed in the Directories from 1920 to 1923 but not in those from 1924 to 1927 so perhaps he moved.

Herbert Percy English Junior bought the house from Vilhelm Larsen in 1926.   Wise’s 1928 and 1929 directories list ‘English -‘ , which would be Herbert English although there no first name.  In 1935 the Englishes made a number of changes to the house. The main one was they put a WC inside the house (although the old dunny was still in the back garden when we bought it) as well as a sink in the kitchen and wash tubs at the back of the house.[2] I assume that until then the women had used the old copper to wash the clothes and it was still there when we bought the house. It lasted until one of my sons and his friend lent on its chimney and it collapsed with bricks flying everywhere. My son’s friend broke his arm but luckily both avoided serious injury. 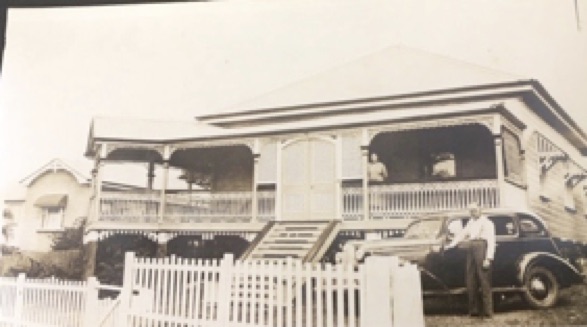 Mr and Mrs Richards in their house next door in April 1938 with my house on the left.

Herbert and his wife Mary Elizabeth lived in the house until Herbert’s death in 1959. We bought the house from his widow, Mary Elizabeth English  in 1972 so only three people have owned the house in almost 100 years.

When I moved into the house, Mrs Smead lived next door with her mother, Mrs Richards. Mrs Smead told me that a Danish consul had lived in my house and this was correct as Dorothea’s husband was the Danish vice-consul at the time.   When Dorothea died the funeral notice announced that friends and family of Lieutenant Colonel Larsen were invited to attend the funeral  ‘…to leave their residence ‘Vistoft’ Morley St, Toowong…for the Toowong Cemetery.’[3] Vistoft is a place in Denmark so perhaps they originally came from there when they came to Queensland in 1881.[4] When we had bought the house, its name was Strathoban so the Englishes must have renamed it.

During my research, I have discovered many things about my street. In 1939 the Council decided to remove all duplicate street names so two streets which lead into Morley were changed from Arthur Street to Dacre Street and Alice Street to Gilrey Street.  The Toowong Citizen’s Band built a hall on the corner of Gregory and Morley Streets in 1913 and regularly performed there as well as many places around the city.  It was long gone when I came to the street but the old Elite Theatre around the corner on Milton Road, with its canvas seats, was certainly there.  It mysteriously burnt down but not before we saw Last Tango in Paris there and, during one of the most torrid scenes, I saw a rat crawling across the aisle.

There are also personal stories and tragedies. Dorris Booth aged 15 from Morley Street was reported missing in 1932 and when found in Sydney, she told the police that she came to Sydney with a young man “with whom she was very much in love” to try to get work. Her father promptly sent her fare to the police and “before leaving Sydney the girl thanked the police for what they had done for her.’[5]  But a much sadder story was Edward Crawshaw, 62 labourer who cut his throat with a razor and left a note in which he asked that a woman should be informed that he ‘had done away with himself.’[6] 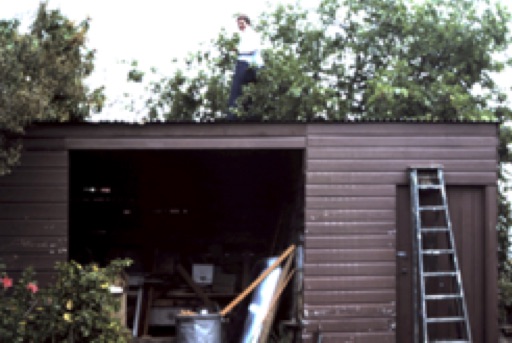 Old sulky shed at the back which we unfortunately dismantled because it had rotten bearings.

The advertising spiel for Allora House described it as ‘… verandahs round three sides and bedrooms on the fourth side, the living rooms are always cool. The breeze also reaches the kitchen which is a large and convenient to dining room and back steps. The design has always appealed to us as one of our best’.    Although we have made changes to the house, the core is still the same and having lived here for 46 years I agree it is one of the best. 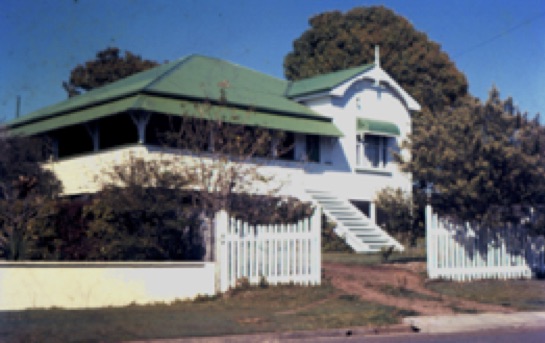 The house in 1972 not long after we bought it. We had opened the fence and changed the driveway.