My Valentine is a recent discovery. A name on the family tree. My great-great-grandfather, Valentine Karle.  Confirmed to be born on 25 February 1826 in Schriesheim, Baden-Württemberg, Germany on his marriage entry some twenty five years later. Another German connection, unknown until my mother’s side of the tree was uncovered.

Valentine is an exotic name amongst the more prosaic Hermans and Johannes and Gottleibs and Williams of the Karle family in early 19th century Germany.  A romantic name, I thought, my perception coloured by 21st century celebrations of Valentine’s Day with red roses and declarations of love and general soppiness. ‘Valentine’ in Australia, great-great-grandpa started as ‘Valentin’ in Germany, a name meaning ‘strong, healthy, power and rule’ linked to several saints of the Catholic Church. Exactly what mothers in 1826 would wish for their baby boys, given the high infant mortality rate.

Valentine grew up in his birth city, the eldest child of Gottleib and Elisabetha, and big brother to sister Sophia, who was born in 1834. It seems a remarkably small and compact family of four for those times, when upwards of 6 children was normal, but I haven’t found evidence of any more siblings.

Schriesheim lies on the small Kanzelbach river, 14km east of Mannheim, 8km north of Heidelberg. It profited and flourished from the legacy of Roman occupation when they introduced roads and vineyards and continues to produce grapes for wine-making to this day. Photographs today show an attractive town with beautiful half-timbered houses in the old town centre. From the terrace of the 13th century castle you can gaze upon the Rhine plain and vine covered slopes. 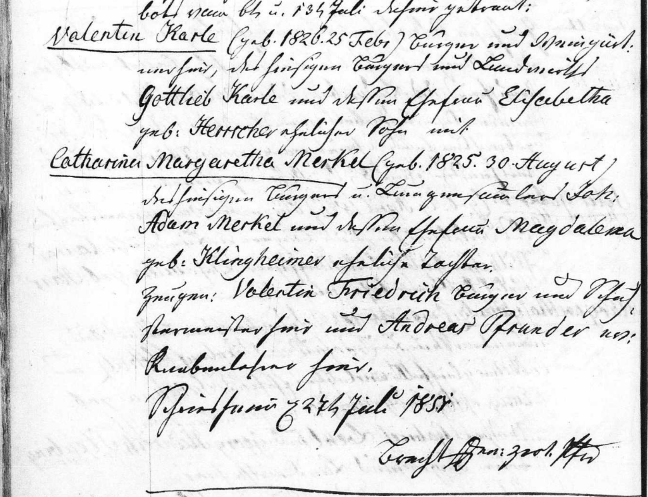 Marriage of Valentin Karle and Catharina Margaretha Merkel on 27 July 1851 in Schriesheim, Germany.[2]

What looks idyllic to us now was undoubtedly much less so in the 19th century. In the region, and indeed throughout Germany people were struggling to make a living due to poor crop yields, and rising cereal prices contributed to undermining household livelihoods. People started looking for opportunities elsewhere and the 19th century saw over 5 million Germans leave their country.

Valentine married Catharina Margaretha Merkel on the 27 July 1851. (How fitting to be writing this exactly 171 years later on 27 July 2022!). Just over three years later they joined the mass migration exodus, their sights set on a new life in New South Wales.  Valentine and Catherina had by this time two children, Gottlieb August, born in 1852 and a little girl Catharina born in 1854. All four boarded the Cateaux Wattel in Antwerp, Belgium, along with 428 other German passengers bound for Sydney and the Colony of New South Wales.

The family had taken advantage of the ‘assisted passage’ scheme provided by wealthy squatters whose labourers had joined the Gold Rush. The squatters were happy to employ German agricultural workers and the Germans – mainly vine dressers – were eager for opportunities to work and eventually own land. Ninety days later The family arrived in Sydney on 12 March 1855. A journey of excitement and sadness, where they not only crossed the equator and travelled far into the Southern hemisphere but also suffered the loss of baby Catharina.

I haven’t yet pieced together all their movements after arrival in the colony, but there is a name written beside their listing on the Cateaux Wattel passenger list which I believe might be the agent or employer they were coming to work for: Charles Blaxland. Could that be the son of one of Australia’s most prominent pastoralists and explorers, Gregory Blaxland? The Blaxland I learnt of in primary school, who, together with colleagues William Wentworth and William Lawson, found a way through the Blue Mountains in 1813, thereby opening rich pastoral lands. Records show Gregory and Elizabeth Blaxland had a son, Charles, born on 22 January 1810, so it is entirely possible that Valentine Karle went into his employ. Further investigation needed which I have added it to the list!

Karle family Immigration in March 1855 onboard the Catteaux Wattel.[3]

At some time, the Karle family made their way to the Darling Downs and settled near Warwick. In 1868 there are records listing Valentine Karle’s address as Sandy Creek, Warwick. By 1871, when I found another public reference to Valentine Karle, they were still at Sandy Creek and had a brood of seven children aged between 19 and 3 years old, three having died in preceding years. The headline in the Warwick Examiner and Times on Saturday 15, April 1871, was quite startling:

SUSPICION OF LUNACY
Valentine Karle was brought up in custody, on suspicion of being of unsound mind.
Sergeant Grayson deposed that on the previous evening prisoner’s son called on him and requested him to come to Sandy Creek, as his father was mad, and so violent that his family could not restrain him, and that he had a bottle of poison on his person, and was threatening to destroy himself; witness, in company with Constable Quinn, proceeded to prisoner’s house and found it deserted; went to George Eckhardt’s house, adjoining prisoner’s farm, whither prisoner’s wife and family had gone for protection; prisoner was outside, walking the verandah; his wife said she was afraid of her life; secured-prisoner, and brought him in to the lock-up:  he was very violent; found a bottle of poison (strychnine, produced) in prisoner’s fireplace.
George Eckhardt deposed that it was the third time prisoner’s wife came to his house for protection; prisoner was under the influence of drink: he threatened to poison himself; he is quiet when sober, and is a hardworking man; believe him to be out of his mind when drunk.
John Johnson, carpenter, deposed that he went into prisoner’s room, and found him holding his son by the throat, trying to choke him; prisoner’s younger son and witness pulled him off, and ran for their lives; he then went to Eckhardt’s; shortly afterwards the police came up and took him into custody.
On Thursday, Drs Margetts and Balls-Heasley deposed that they had examined the prisoner and considered him perfectly sane. From his answers it appeared that his violence arose from domestic troubles and drinking.
The prisoner was discharged with a caution.

How illuminating it would be to hear Catharina’s side of the story, life must have been hard, and with their children and a husband who periodically went mad on the drink, it was probably very stressful for her. How little we really know of the life of women in those times and of what they had to bear on a personal and domestic front? 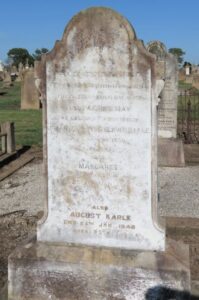 As ever with family history research, there are many more gaps to fill in and undoubtedly more stories to discover. The path that leads to my mother Betty, through Valentine and Catharina’s daughter, Magdalena and her son Albert, and then to Betty, is of particular interest. Valentine’s journey ended on 28 March 1893 at the age of 67, and he is buried in Warwick under a substantial and shapely headstone, together with a son, an infant granddaughter, and finally Catharina his wife.

Valentine’s obituary reads:
OBITUARY – Mr Valentine Karle, a very old and respected resident of Sandy Creek, died at his residence yesterday morning. The deceased, who had passed the allotted span of life, had been a sufferer from dropsy for some time past, which was the immediate cause of death.  The funeral leaves Sandy Creek at noon today.[4]&[5]