My family history is full of Scottish immigrants who came to Queensland in the mid-nineteenth century and stayed in Queensland. With that in mind, I wondered why my grandfather’s brother, Robert James Porter, had a daughter buried in the Rookwood Cemetery in Sydney.[1]

Robert married Annie McIntosh in 1907 in Pittsworth, and their daughter Gladys Ann was born ten months later on 10 June 1908.[2] Gladys died at age nine months on 6 March 1909 in Sydney. What was Gladys doing in Sydney? Was her family with her? Did the family move to Sydney? I had no idea. What now? I decided I needed to know what was on Glady’s death certificate, particularly the cause of death. I purchased a transcription from one of the approved transcription agents attached to the New South Wales (NSW) Registry of Births, Deaths and Marriages. 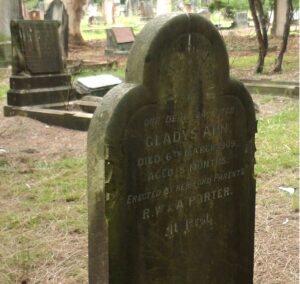 The contents of the transcript were a shock. Gladys died of ‘syncope’ (shock) following an operation for cleft palate at Sydney’s Camperdown Children’s Hospital. Gladys was in NSW for only four days, and then on the fifth day, she was buried.[3] I was stunned—poor little Gladys. I wondered how her parents must have felt. Perhaps their only hope, they had taken their baby to Sydney for an operation to fix the cleft palate, and she had died. After talking with a paediatrician who is also a medical historian, I now know that while surgeons could have undertaken the procedure at the Hospital for Sick Children in Brisbane, families who could afford to do so took their babies to the children’s hospital in Sydney which had a good reputation.[4]

I had never known anyone with a cleft palate in the Porter family, so I wondered what caused the disability. I learned that cleft palate and/or lip could be genetic or ‘teratogenic’ (caused by environmental factors). In Australia, about one baby in every eight hundred has a cleft lip or palate.[6] The disability varies in severity from a fissure (a split) in the soft palate to complete separation of the soft and hard palates extending through to the lip. Without a formed palate, an infant cannot suck and has trouble taking milk from the breast or bottle. Malnutrition can result. At that time, an operation was generally undertaken to repair the cleft when the baby was aged around eight months.[7]

Apart from the death certificate, the only other trace of this tragedy was on Gladys Ann’s monumental inscription. It reads, ‘Our Daughter Gladys Ann Porter, eight months, dau., erected by her fond parents R. W. and A. Porter. At rest’.[8] Glady’s parents then packed up and returned to Queensland to continue their lives, leaving their baby daughter in her grave. 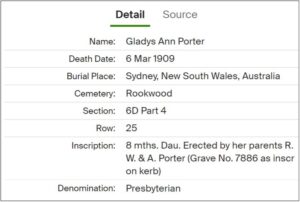 In 1911, Bob and Annie had another child, a boy named Robert Keith.[10] Did Keith, as he was known, also have a cleft palate? I did not know the answer. I purchased his Australian Army medical file from the National Archives of Australia. Initially, I bought the record to see if there was a photo of Keith. I had read that medical army medical files for the Second World War sometimes included photos.

There was no photo, and I had another shock. There were medical facts that showed that Keith also had a cleft palate. The army discharged Keith as medically unfit but included statements on the file indicating Keith’s difficult life. Keith’s army superior described him as a ‘trier but cannot make the grade’. At the same time, the medical officer found that Keith was affected by ill health, had no teeth, could not keep food out of his nose and existed on a milk diet.[11] Keith’s parents apparently did not arrange for him to undergo the same operation as Gladys, therefore, not risking their second child’s life; instead, he lived an unenviable life.

The premature death of Gladys and the ill-health suffered by Keith may have remained hidden, except that I purchased a death certificate and downloaded an army medical file. Family historians are reminded not to rely on indexes and to get the original records. I am so pleased that I followed this advice so that more of this hidden chapter in my family history unfolded with each record obtained.