↓
GSQ Blog→Uncategorised→The Box in the Museum.

Often when travelling, I’ll visit the local museum to gain an insight into a town’s history, be it a gold mining area, a farming community, the hometown of a person of note or perhaps where a remarkable discovery has been made.

Last year I visited Surat, a sheep grazing region of the Maranoa District of South West Queensland. The picturesque township played a significant role in the Cobb & Co era of the late 19th century when passenger and mail stagecoaches opened inland Australia to pioneering settlements. The Cobb & Co Changing Station Museum at Surat was once the drop off point for travellers and goods for the district and I was keen to visit. Wonderfully informative displays describe the town as it once was and taking pride of place is a magnificently restored Royal Mail Cobb and Co Coach. 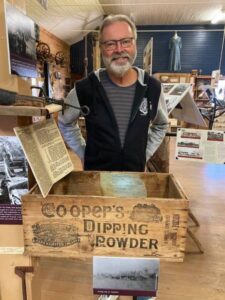 Author’s husband, Greg Dean and the Coopers box at Surat.

A significant portion of the museum is devoted to the wool industry, describing the shearing process and classing of the fleece. What really took my interest, however, was a timber packing box which was instantly familiar to me, though I’d never actually seen one before. This box once held “Coopers Sheep Dip” according to the logo painted on the front and it was this image which I recognised. In a previous blog, I wrote about my husband’s great grandfather Alfred Dean and it was at the Cooper’s Chemical Company in Berkhamsted, Hertfordshire, where he held the position of Works Manager prior to migrating to Australia in 1928.1

On display also were the lengthy and very specific instructions for not only mixing the chemical to the correct strength but also for the method of dipping the sheep and two receipts: in 1928, Mr Neill of “Berwick” paid 6s 9d rail freight, to transport his powder to Yeulba (sic). In 1944, Mr B G Neil Esq of “Enderslie” Surat paid £4 for a box of dipping powder with a cartage fee from Brisbane also of 6sd 9d.

Receipt for purchase of the dipping powder.

Coopers Chemical Works was established in 1852, in Ravens Lane, Berkhamsted by William Cooper, a veterinary surgeon and businessman and was the major employer in the town. William had arrived ten years prior from Clunbury, Shropshire with a few possessions of his veterinary trade including his mortar and pestle. Over time he developed an effective formula to combat the problem of sheep scab, the scourge of sheep.

The dipping powder itself, which was to be diluted with water, contained a powerful mixture of sulfur and arsenic and was easily transportable. “A chemical compound containing a poison” is printed on the box I saw.

Instructions for the mixing and use of the dipping powder.

Through careful experimentation, Cooper developed a new method to curing sheep ailments, whereby the animal was treated by immersing it completely in what he described as a dipping bath, rather than merely daubing the fleece with “tar and goose-grease, tobacco stalks and brimstone”, and having limited success.  The new dip would penetrate the fleece and reach right to the animals’ skin enabling it to both cure the ailment and offer further protection against infection.

Berkhamsted was, and still is, a thriving town situated on the Grand Union Canal, once a major transport link between Birmingham and London. Initially, raw materials required for the production of the dipping powder arrived at the Castle Wharf situated at the end of Ravens Lane, and the finished product was transported into London for distribution via the canal. Later rail transport was employed.

A horsedrawn millstone ground the powders on site until new steam-powered machinery was introduced in the 1860s.

William Cooper constructed his own printing works which used a lithographic process whereby the labels produced could not easily be imitated. In addition, the packaging and printed materials required by the Chemical Works were printed there.

The Dean family had a long association with Coopers according to “Cooper History Record 1843 – 1943”.2 My husband’s 2x great grandfather, George Dean (described as “that old character”) worked there as a carpenter and was reportedly much respected by William Cooper. As mentioned, Alfred Dean (George’s son) was the Chemical Works manager up until his retirement and migration, having completed 43 years’ service with Coopers. Records suggest he began his working life in the lithographic office around 1885 with a starting wage of 6 shillings per week. 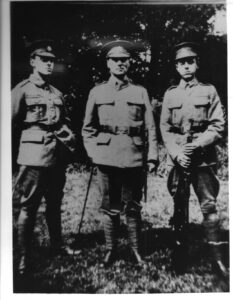 George’s other 4 sons also worked for Coopers: Joseph was a carpenter who rose to the position of foreman in the box-making department, Thomas and Harry were also carpenters, Frank was in the packaging and decorating department.

In the 1911 England Census, Joseph’s son George was listed as a box maker, Arthur a painter, Horace a carpenter and Frederick a labourer all at the Chemical Works.  Coopers Chemical Works underwent extensive additions during its heyday and other Dean family members were quite possible involved in the construction, having employment as carpenters and painters. The extent of the factory can be seen in the diagram printed on the crate. 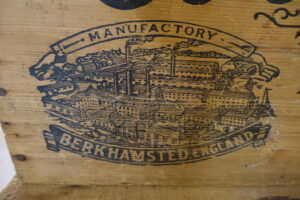 Image showing the extent of the Cooper factory at Berkhamsted, England.

A crossed-out entry in a shipping record to New York in 1919, Greg’s grandfather Alfred Edward Coote Dean indicates he was an Assistant Works Manager. He migrated to Australia the following year instead, settling in Sydney.

The 1921 England Census, in addition to Alfred, lists his second son Philip Ambrose as being employed as an apprentice engineer at Coopers. The boys had followed the family tradition.

Most of the original buildings of Cooper’s Chemical Works in Berkhamsted have since been demolished and replaced by a housing estate. The original administration building “Cooper House” on Ravens Lane, remains but has been converted into apartments. The name is visible above the front door. 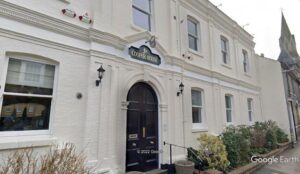 Cooper House as it is today. Image courtesy of GoogleEarth.

After visiting the museum, I was chatting to two of the ladies who were volunteering there that Sunday morning. They both remembered their parents and others in the district using these distinctive sturdy boxes in their homes to store their firewood and all manner of things. They were a familiar sight and lasted for years they told me.

I couldn’t believe I’d come across a connection to the Dean family’s past in Berkhamsted right there in the relatively small museum in Surat. How lucky was I to have seen that box?

Photos are from the Dean family collection