The last of my Killyleagh siblings in this series of blogs is my great-grandfather, Robert Gilmour Irvine. I’ve written about the other ten siblings including the birth of Robert’s twin brother Andrew in 1849 in a previous GSQ Blog.[1] It appears that Robert was a devout Christian and in April 1867, when 18 yrs old he was confirmed along with his elder brother, James.

With planning well underway for his emigration to join his brothers in Queensland, before he left the security of his village and family life in Ireland, he sought a reference from his local clergy. The minister of the Killyleagh Presbyterian Church obliged and wrote in part ‘Mr. Irvine is competently skilled in Sacred Music, and has conducted as pricentor, the psalmody of our church for two years with much acceptance’.[2]&[3]

Robert arrived in Brisbane abroad the ‘Alexandra’ on 11 April 1874.[4] For the first 18 months of his life in the new colony he lived at bustling Warwick, at that time the centre of the newly discovered rich grazing/farming area of the Darling Downs.  Robert retained his connections with that city by returning to Warwick in later years to live for a period where his great-niece remembered he kept bees.

In October 1875 Robert obtained character references from three Warwick citizens to accompany his letter to the Commissioner of Police, Brisbane in his endeavour to join the Police force.  Also included was the letter from his Killyleagh minister. 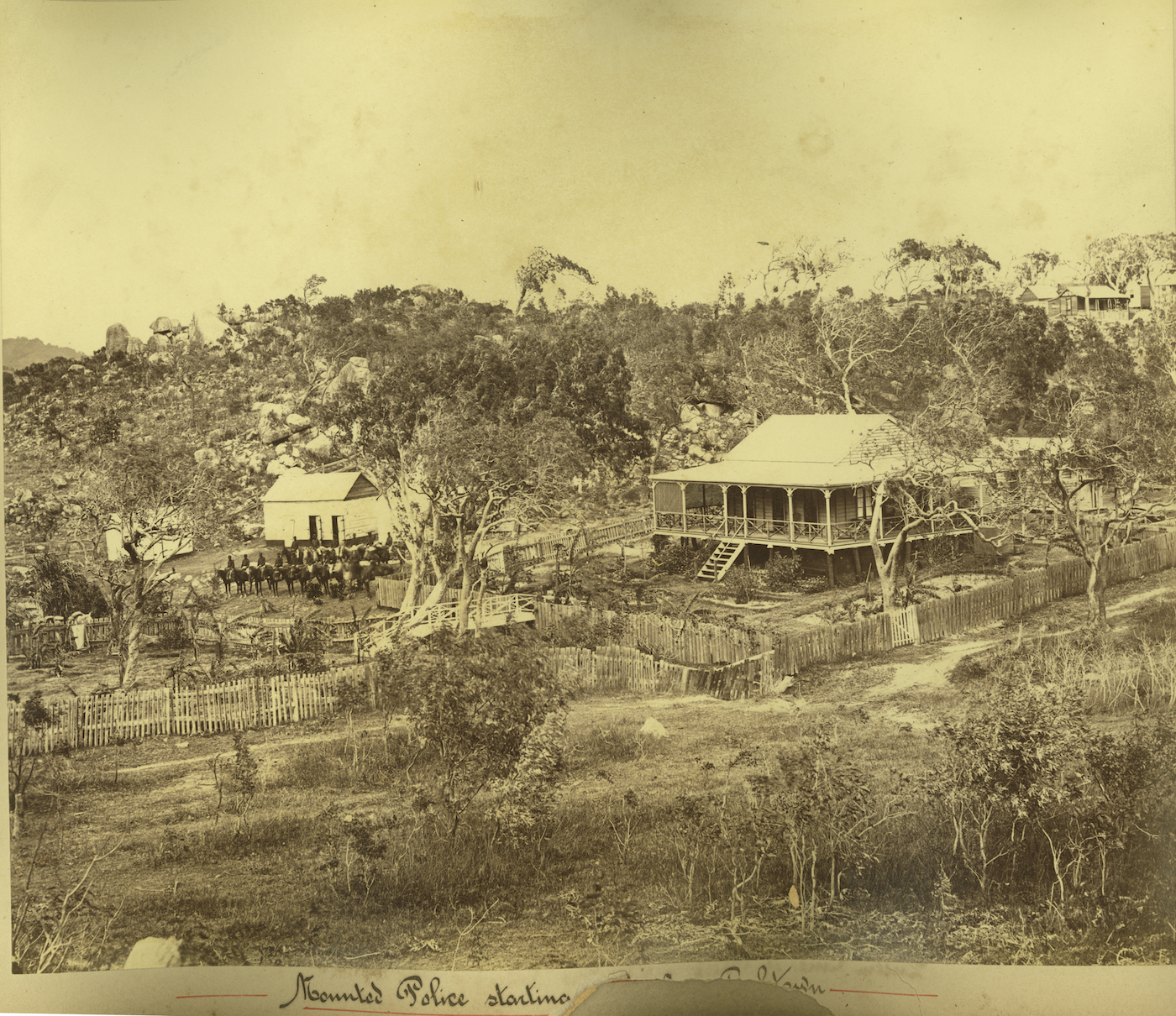 Robert entered the Queensland Police, Register Number 15 on 17 November 1875. He was transferred to Cook Districts on 23 March 1877, then in later years after Cairns was established as a town, was sent there to re-erect the old Barracks (vide Cairns Bar). Cooktown at this time was a bustling city, the second largest in Queensland, with hundreds of houses lining Charlotte Street. Ships were arriving from all over the world but having to wait for available wharf space to discharge their imports and human cargo.  Most of the new residents had one quest – to search for gold.

As shipping was the primary form of transport up and down the Queensland coast at that period, the following year Robert was granted leave, and sailed for Brisbane where, on 11 April 1878, he was married to Harriett Elizabeth Davies.[5]

On 29 January 1879, his wife Harriet Elizabeth Irvine (nee Davies) gave birth to the first of their six children, Andrew Davies Irvine in Cooktown.[6] On the birth certificate Robert listed his occupation as Police Carpenter, but on subsequent children he is listed as being a Police Constable in Cooktown.

A second son, James John Irvine was born on 18 October 1880, but sadly died some four months later on 6 January 1881 of meningitis, having had the disease for 6 days.[7]  A third son, Francis Robert Irvine was born the following year on 28 March 1882 at Cooktown.[8] Francis, known as Frank, survived and became a carpenter like his father.

Roberts police papers tell of how he was twice recommended for promotion during his stay at Cooktown, where he was regarded by his superior officers as ‘A very excellent man, extremely attentive to his duties’. On 5 May 1882 a letter was written by Harvey Fitz-Gerald, who was Inspector of Police at Cooktown ‘Constable Robert Irvine D3 begs to apply respectfully to the Commissioner of Police for leave of absence from 13 May to 10th June 1882 for the benefit of his health, as his health has not been well of late – the Constable has not been on leave for the last four years. Trusting this Inspector will kindly recommend him for the favour asked for.’ This leave was granted on 12 May 1882.

During this period Robert attended and purchased five blocks of land at Government auctions in Cooktown.[9] The wage of a Constable in the Police Force during this period was £122 per year. Harriet had had a considerable amount of money left to her on her father’s death before her marriage to Robert, perhaps as “befitted” a wife of this period, this was used to purchase the allotments.  Although it should be borne in mind that her father, John Davies, created a clause specific to this eventuality in Harriet’s inheritance. The five property purchases were an investment speculation that in retrospect appeared doomed to failure, with the allotments having been “Surrended to the Crown” some years later.

Some 115 years later I was able to identify all but one of these five allotments when holidaying in Cooktown. One allotment still lies vacant and not built upon, that block lies in a superb, elevated position at the foot of Grassy Hill, a local landmark since the days when Captain Cook climbed its steep slopes to view a safe passage through the coral reefs after repairing the Endeavour.  The other three allotments have houses built on them.  As Robert’s address on the Electoral Roll then is Charlotte Street, some distance from four of the five allotments, it would appear that he resided in rented accommodation nearer his place of work. 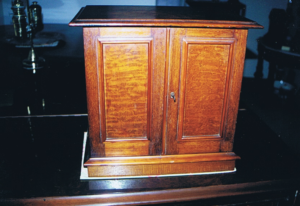 A beautiful small cabinet made by Robert Irvine for his brother Hugh’s wedding.

The Roma, on which Robert’s sister, Mary, her husband Clement Parkinson and their three children, and brother Hugh Ackin (or Aitken) Irvine were passengers, called into Cooktown in November 1882, before arriving at Brisbane on 17 November, I would imagine the brothers caught up for a brief period.

On 25 April 1884 Robert sent in his resignation to the Inspector of Police, Cooktown who wrote to headquarters in Brisbane
“Constable R. Irvine is an excellent man and I regret losing his services.  His defaulter sheet is clean and his service can count for some 9 years.
It is somewhat difficult to get men of his stamp here to remain in the same position for so long without a certain amount of dissatisfaction, but the inducements held out by the current rate of wages for his trade (carpenter) offers better inducements than the police.
I recommended him for promotion in my commendation of Nov 1st 1882 in reply to your memo of the 10th October.
No man could have been more attentive to his duties as a Constable while under my command. signed  – H. Fitzgerald Cooktown 25/4/84.’

A final note by H. Fitzgerald on Robert’s file remarks “Resigned 30th June 1884.  A very excellent man extremely attentive to his duties and twice recommended for promotion during his term of service here under me” H. Fitzgerald.[10]

During this time of great turmoil his decision may have been influenced by his wife Harriett, who was expecting their fourth child Eva Elizabeth, born on 9th June 1884 at Cooktown.  Her birth was registered on 20th June, just prior to Roberts’s resignation. 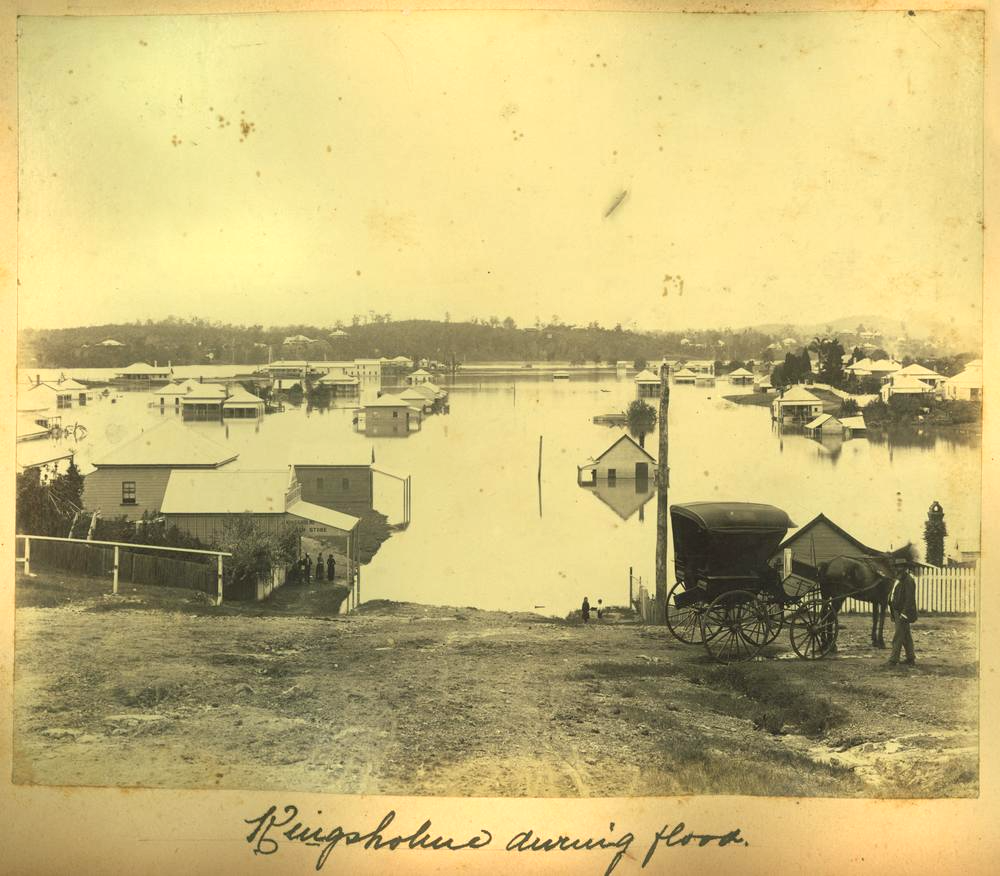 Kingsholme in Brisbane during the 1893 floods. Thanks to John Oxley Library, Queensland State Library for use of this photograph.

The family appears to have then re-located to Merthyr Street, Kingsholme (New Farm) for the next 12 years or so.[11]  Lily May Irvine was born on 4 December 1886 and sadly only lived for 5 weeks – Lily was buried with her maternal grandfather at the Toowong Cemetery. Exactly two years later on 4th December 1888 the sixth child was born to Harriet & Robert. This child was William James Irvine. 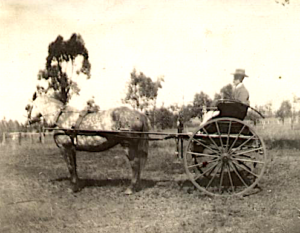 Robert Irvine in his sulky about 1920. Photo from Irvine family collection.

Apparently Harriet and Robert decided to go their separate ways about the turn of the century, as in 1906 Harriet Elizabeth Irvine is listed on the Queensland Electoral Rolls as residing in Corbett St (Opposite Cambridge, off Boundary Street), West End with her children. By then Robert had returned to Warwick, where he continued with his carpentry trade and lived with other family members at Mt. Thabor, a prominent landmark just outside the town.

In July 1909 at the time of his brother John’s death in Warwick, Robert is listed as a Carpenter residing at Warwick. Sometime following that he returned to life in Brisbane and purchased a house in Cedar Street, Wynnum. His younger brother Hugh Irvine, had a department store there. Both brothers were active in setting up the local Open Brethren assembly with Robert believed to have contributed substantially to the building of the church.

Robert, aged 79yrs died on 22nd September 1928 with his cause of death listed as Carcinoma of Liver and Heart Failure.[12]  He died at Cedar St. Wynnum South, his Death Certificate was certified by Mary Parkinson, his niece, of the same address.  He left his home to his niece, Mary Parkinson, and is buried in Toowong alongside his brother, James who had died on 25 February 1927.[13]  On Robert’s death certificate he is shown as a Retired Carpenter. 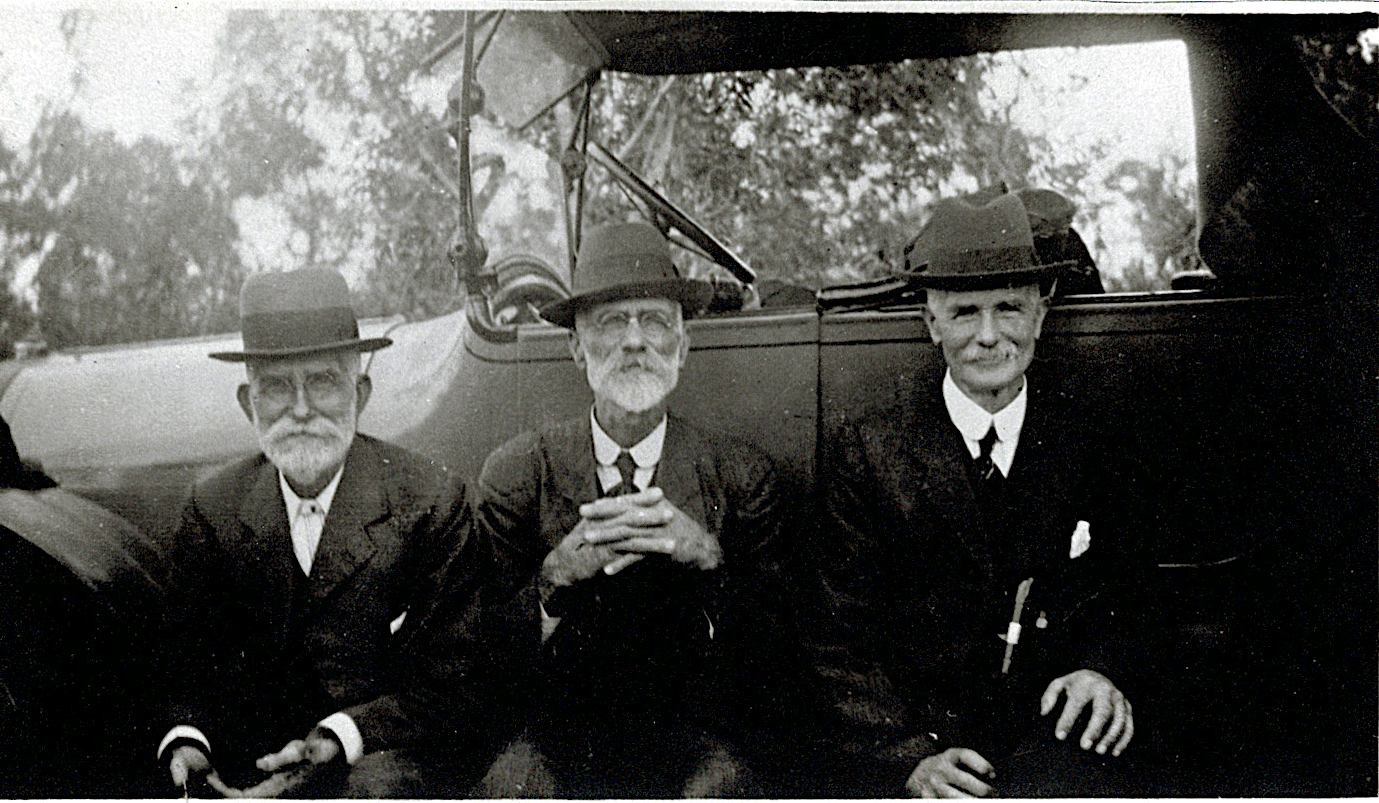