I have been using newspapers a lot recently. One of my current projects has prompted me to explore an extensive range of local and national newspapers in Australia and the UK. I’ve been searching primarily on Trove (trove.nla.gov.au) and on the British Newspaper Archive (http://www.britishnewspaperarchive.co.uk/) and FindmyPast (www.findmypast.co.uk) to find relevant material. Else Churchill of the Society of Genealogists in London gave an interesting and timely talk on 19th century British newspapers, 18th century Journals, Local Directories and Poll Books on the recent Unlock the Past Tasmania Cruise. She regarded newspapers as a vital tool in finding reports of major and minor events – from an industrial accident to a local tragedy. Newspapers offered social commentary and background as well as information about the communities in which our ancestors lived. If we are lucky we might even find out information about them. Even if you can’t find your own ancestor, at least you will appreciate the time and place in which they lived.

The value of newspapers in adding context to our ancestors’ lives has been well-documented. Local newspapers especially were always looking for copy and they include a wide variety of material such as family announcements of births, marriages, and deaths. As well, obituaries and accident reports often fill in many details of people’s lives, which we can then follow up in official records. On a more positive note, reports of weddings, anniversaries and good luck stories bring a smile to our faces as we read descriptions of wedding dresses, gifts to the lucky couple, the celebratory feasts. Reports of crimes, whether our ancestors were the perpetrators, victims, or witnesses helped to fill many pages and satisfy the readers’ needs for gossip and local intelligence. Local newspapers with a limited circulation can tell us a lot about the places where our ancestors lived and the people who lived there. 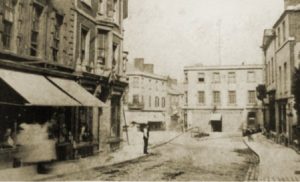 Advertising has been the lifeblood of many newspapers and they are an excellent gauge for understanding the local community; what were the prominent businesses and who ran them; what products did they sell. Auctions of agricultural produce may feature extensively especially in rural areas, while auctions of property, job vacancies and employment wanted may be found more often in urban papers. Advertisements often appeared on the front page of 19th century newspapers indicating their importance and ensuring the publishers earned sufficient income to keep the paper going.

Back to my current project, I wanted to add more colour and context to the lives of forebears in the UK prior to their migration to Australia and so I turned to the local newspapers to see if I could find anything of interest – in this case in Yeovil in Somerset in England, an area I didn’t know much about. Items of wider interest, such as a bankruptcy, were picked up by many papers throughout the country, but the advertisements targeted at the local community were very informative. I have since located a great site created by Bob Osborn called Yeovil History (http://www.yeovilhistory.info/index.htm) which has an A-Z of Yeovil History and includes many photos. 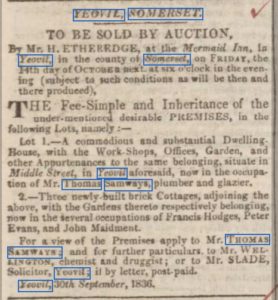 Jane Rowsell Samways, who settled with her husband Isaac Bryant in Victoria, was the daughter of Thomas Samways and Sarah Rowsell and was born in Yeovil, Somerset in 1820. Thomas was a plumber and glazier and was obviously doing quite well for himself if the advertisement in the Sherborne Mercury was anything to go by. In 1836, the family was living in “a commodious and substantial dwelling-house, with the work-shops, offices, garden, and other appurtenances to the same belonging, situate in Middle Street, in Yeovil, aforesaid”. This property, with three adjacent brick cottages, was put up for sale at auction in October 1836.

Thomas was one of the contact people for anyone wishing to view the premises. The property was to be sold as Fee-Simple Inheritance, which meant that the owner had absolute rights over what could happen with the property. It was not encumbered. It’s not clear whether Thomas owned the property or whether he was a tenant, but he was still living there in 1841, when the census was taken. One could easily imagine Thomas the glazier fitting windows to properties, but an interesting research trail to follow would be to discover the type of work done by plumbers in the 1830s, although that would be for another day. 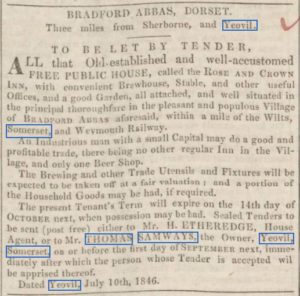 Thomas had other property interests as well as that in Middle Street, Yeovil. In 1846, and again in 1852, he advertised the lease of the Rose and Crown Inn in Bradford Abbas in Dorset, which he owned. In 1846, this was described in glowing terms: “Rose and Crown Inn, with convenient Brewhouse, Stable, and other useful Offices, and a good Garden, all attached, and well situated in the principal thoroughfare in the pleasant and populous Village of Bradford Abbas…”

This advertisement was not only useful in its description of the Inn, which is still going strong in 2020, it also described its location in detail and we learn that by 1846 the Wilts, Somerset and Weymouth Railway had arrived in the vicinity. Thomas was obviously promoting the proximity to the railways as a means of the tenant making an excellent income from travellers to the area. The advertisement also highlighted the expansion of railways in the 1840s and provided clues for further research, either for someone who worked for the railway company or used the railway to move elsewhere. Together these two advertisements provided a lot of contextual information for Thomas Samways, who retained his profession as plumber and glazier while building up a portfolio of property as a means of increasing his income. 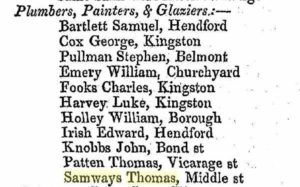 Else Churchill also discussed the value of local directories when searching for information about ancestors. In the case of Thomas Samways he appeared as a plumber and glazier in directories such as the Universal British Directory (1790), Hunt & Co Directory (1850), and also Pigott’s Directory (1830). Many historical directories are available online at Ancestry.com in its collection of UK, City and County Directories, 1766 – 1946. The directories were sourced from the University of Leicester Special Collections (https://cdm16445.contentdm.oclc.org/digital/collection/p16445coll4). Your ancestor may not only have paid for his business to be included in the alphabetical listing but may also have paid for an advertisement of the products and services provided by the business. Searching newspapers and directories for information about ancestors can be extremely rewarding and valuable in piecing together the lives of our ancestors.