↓
GSQ Blog→immigrant ship names→The Kate and her companions who brought immigrants into Brisbane.

A researcher was intrigued to learn that her ancestors, who arrived by the Susanne Godeffroy and Melmerby in 1865, Wansfell in 1866 and Royal Dane in 1869, all made the trip from Moreton Bay to Brisbane in the Kate. What was the Kate? What was the journey from the bay to Brisbane like? 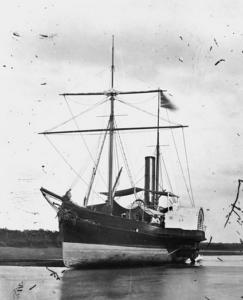 The Kate, a 150-ton iron, paddle-wheel steamer especially designed for Brisbane’s bay and river trade, was built in 1864 at Newcastle-on-Tyne for J and G Harris who were involved in Brisbane wharfage, transport and cargo inter alia. The Kate had two holds, a large cargo deck and roomy accommodation “fitted up plainly.” She was especially powerful to allow towing of other craft. J and G Harris advertised her sale before she had even arrived. They used her on the Ipswich run but after the Government bought the vessel in 1865, she did government work including transporting government officials to immigrant ships and migrants to Brisbane, towing migrant ships and supplying migrants’ needs before they reached port.

Most migrant ships could not come into the Brisbane River because it was too shallow beyond the bay.  While an account of the steamer trip from the bay to Brisbane on the Kate in the 1860s was not available, there are reports of other journeys which capture the experience. First impressions and reflections in this transition from one country to another can transcend the assembly of facts such as arrival dates, ship names and immigrant numbers. 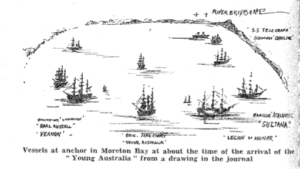 William Smith who arrived on the Young Australia in 1864 sketched twelve vessels (Sketches at Sea) including a few smaller boats in the bay, reflecting the immigration surge in the early years after Separation from 1860.

Smith’s travelling companion, Richard Watt, recorded in his diary (reproduced in Sea Breezes 1956 Vol 128 pp 88-91) the anticipation and excitement after anchoring, then waiting in the bay for health clearance and the steamer to Brisbane.  “All was bustle to get the ship into order, to receive the officers, and when all was ready the cannon was fired as a signal, and the flags run up to the mastheads. Below, all were packing up their chattels, and as several steamers were seen from time to time in the course of the morning to come down the river towards us, each was supposed by excited individuals to be ‘the’ one to take us to Brisbane.”

Stretch of the Brisbane River from Hockings Whaft towards South brisbane ca 1868.
This image has been digitised by the State Library of Queensland, and provided to the Wikimedia Commons as part of a cooperative project.

It was noon of that day before the steamer, in this case the Diamond, arrived. It brought the health and customs officers as well as some “sunburnt colonists”, friends or family of the new arrivals. It also brought fresh beef, mutton and new potatoes. After a few hours the vessel left with government officers, the skipper and saloon passengers. The remaining immigrants comforted themselves with abundant fresh food. Two days later, the vessel, Settler, came to take them and luggage into Brisbane. The officials called out the immigrants’ names and asked if they had complaints. Watt said they “smothered their grumblings”, keen to land. When all were on board, the Young Australia fired her gun amid “deafening cheers.” 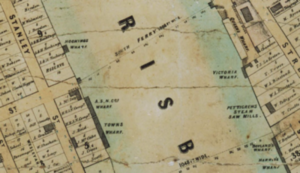 On the final part of their immigrant journey, approximately 30 miles from the bay, along the river to the wharves, Watt recorded the view, “At first there was nothing interesting in the low, swampy islands near the mouth, but after winding some four or five miles the scenery was truly beautiful. The gum tree and mangroves became scarcer, and the vegetation began to resemble the ash and poplar trees of home with the addition of the beautiful banana.” They were greeted as they travelled along the river by “little groups of ‘blackfellows’” and “many a brown planter” waving to welcome more “new chums”. He was impressed by the houses and gardens commenting that “all bore at least the aspect of comfort”. He found the birds had “strange plumage” and “made curious noises.”

“The river is most pleasing within a mile of the town where it suddenly sweeps sharply round and as it has steep rocky banks which are overgrown with large evergreen trees, it could make a capital city for artists”. 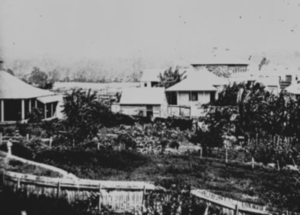 Looking towards the new military barracks 1863. State Library of Queensland

They landed at Raff’s Wharf where Watt noted there were 4 steamers which would be going separately to Sydney, Melbourne, Rockhampton and Port Denison. The heart of Brisbane along the river, unlike today, was dominated by wharves, warehouses and related businesses. See map below.

The river itself was a heavily trafficked artery for goods and people not least because of the roads – non-existent or very poor.

The town exceeded his expectations, “large and straggling, connecting up North and South Brisbane built for the most part on undulating land…On the summits of the highest rises are built the churches, chapels and the observatory or signal station”. Charles Eden, an arrival by Queen of the South, thought the settlement more “picturesque than flourishing.”[1] 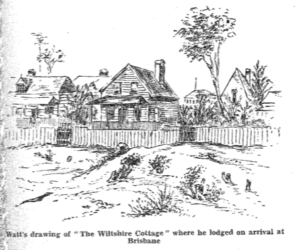 Watts drawing of The Wiltshire Cottage where he lodged on arrival at Brisbane. Image from Sea Breezes magazine, Queensland State Library. August 1956 p91.

Watt describes their arrival at the landing stage “all confusion and bustle” with “excited passengers hauling up their luggage to the wharf” as well as “the meeting of long-parted friends or the disappointment of others” as they learned of the death of those who might have met them.

He describes their luck in meeting a lady who could find room for three at Wiltshire Cottage, lucky because of the many new arrivals.

[1] Charles Eden link is a pdf download of the book ‘An Eight Years Experience in the above Colony’ by Charles H Eden 1872 London – Longmans, Green, and Co. The download is 26MB