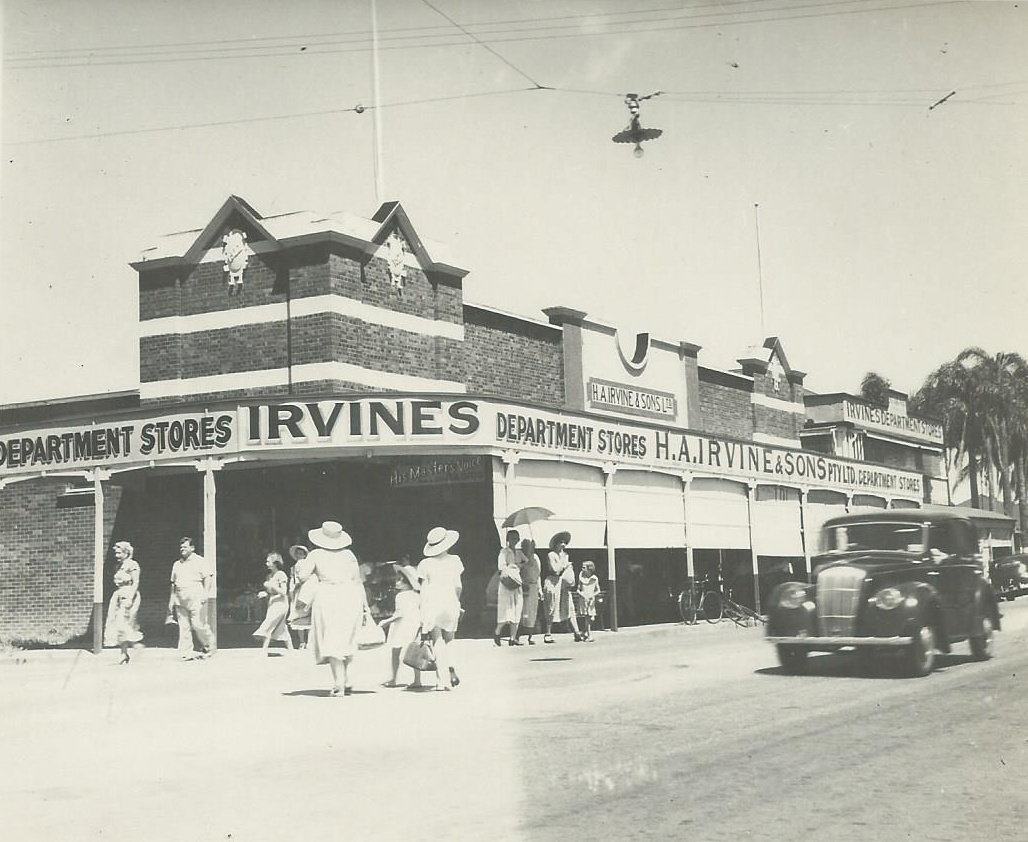 Irvines department store in Bay Terrace Wynnum. The family residence can be seen at the right end above the shop. Taken about 1930s, picture held by Lyn Irvine in the Irvine family album.

Hugh and Amelia Irvine opened their Commonwealth Store on the corner of Bay Terrace and Charlotte Street Wynnum in 1901, and it grew over the next fifty years to become an icon of the district, eventually known colloquially as “Irvines”.[1] After Amelia’s death in 1921, Hugh married Flora Mary (Hadlow) Jones in 1925. They lived above the shop until Hugh’s death in August 1941. Also living there were his son Bert (by his second marriage to Amelia Watt), with his wife Eunice and children, Lex and Bronwyn. Hugh’s other son Sam Irvine from Hugh’s first marriage to Mary Parkinson, lived nearby with his wife Zillah (who was Eunice’s sister). Their children were Ian and Colleen. Before he died in 2014 at the age of 83, Lex Irvine recorded some of his memories of that life.

“The dwelling above the shop was large. I remember boasting as a small child that we had 20 rooms – a gross exaggeration by counting every small hall and verandah. It was divided into two flats with some interconnecting doors. My grandparents lived in the Bride Street side, and my parents, Bronwyn and I in the other. 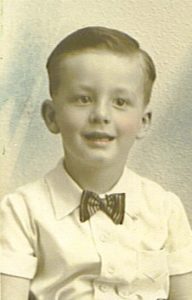 Grandfather Irvine was a tall, slender, reserved man who had very little to say, but always had a pocket full of sweets to be liberally given out. My Grandmother, whom he called Florrie, was his third wife, and she was my beloved “Aunty Flo”. A real sweetie, she was incapable of anything resembling anger. My standard greeting to her was “Aunty Flo are you having visitors?” and her response – “Only you, darling”.

As a child I loved life above the shop – and loved every shop assistant, spending hours yarning to them. I remember how I dreaded Saturday midday when the shop closed for the weekend and my life suddenly became restricted. Several of the shop assistants really stand out in my memory. There was Dad’s office clerk, Dot Mendoza, who often supervised my bus trip to Grandma Lennox on Saturdays. There was also Nella Kimlin (later Crellin). Her dad was a vet, and Nella knew how to treat various birds and kittens that I had. He provided the wherewithal to treat and manage the maladies that occurred. I remember waiting anxiously in the morning for her to arrive with ointments, drops and anything else needed. Nella eventually left the shop and became a much sought-after accompanist at the Queensland Conservatorium.

Nearly all the family members at one time or another worked in the shop. This had been the case right from the beginning. Some of Sam’s relatives, the Parkinsons, had been there before my time. Arthur Payne, married to Sarah Irvine (Sam’s sister), managed the grocery shop for many years. Mum acted as a buyer for the drapery, manchester and lingerie departments, and the little cedar desk she used now belongs to our daughter. It still has the original price of 3/6d (three shillings and six pence) marked underneath in pencil. Zillah sometimes helped with buying millinery, whilst Sam managed the men’s wear and footwear. Dad had a broad management role, supervised the office and accounts and had a special interest in the crockery department. My cousin Ian Irvine managed the hardware section and did a large trade in builders’ materials. I worked part time in the business while studying accounting, economics and later psychology. This was eventually to be my profession, and I worked in the Psychology Department at University of Queensland for some 36 years. Bronwyn and Colleen also worked with Mum, and they all had responsibility for buying, stock display and organizing sales. Colleen, and another shop assistant, Phyllis Ainsworth, both had a spontaneous and irrepressible sense of humour, and I distinctly remember Dad discreetly hinting on occasions that they might “tone it down a bit”! 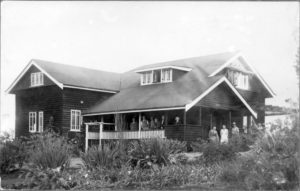 Colleen and Ian, our “double cousins”, lived across the road and spent a lot of time with us. I started school early, about the age of 4, with Colleen taking me to Miss Greene’s kindergarten each morning. I really idolised Colleen and followed her around much of the time. If she found me a burden, she never showed it. Ian, 4 years older than me, was a bit of a larrikin and together we often got up to mischief leading to trouble with relatives and staff. Uncle Arthur (Payne) was often the subject of our wicked pranks. For example, we sometimes filled his office drawers with cracked corn, or broke eggs on the leather seat of his chair. On Monday morning he would furiously hunt around for the culprit. Living on the premises, I was usually the first to cop the blame, though I expect he knew Ian had a hand in it. When he complained to Zillah, she would usually confiscate Ian’s bike for a week- which punished both of us as we often went riding together.

My mother’s parents, John and Rebecca Lennox, lived around the corner in Bride Street. Grandfather Lennox was a very studious, distant man, but Grandmother was a wonderful, humorous Irish woman. Her sense of humour was delightful and to be with her was always fun. She had appropriate comic names for everyone- (The “Tomato” Smiths” who grew tomatoes; the “Wonky” Smiths who owned a T-model Ford; the little Miss Nip-noses” self-explanatory!), and often had us in fits of laughter. When they moved to Eskgrove Street, East Brisbane, (so that Grandfather could be near the State library) I was often allowed to go by bus to stay with them for the weekend. Dot Mendoza who worked in the shop, lived near them and supervised my comings and goings. 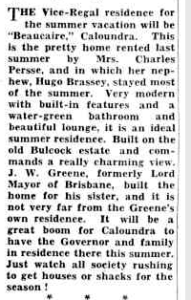 Local holidays were spent at Mt Tamborine or Caloundra. Usually, both Irvine families would go together, often with other friends such as the Wright family. If it was to be Tamborine, we often took over the whole of Bungunyah, young ones sleeping in the attic rooms and the adults in the main bedrooms. Mrs Franklin, a bit of a mystic, was a great cook, and her two sons entertained us with a range of activities. If we went to Caloundra, we occupied Miss Elsie Greene’s pride and joy – a home called ‘Beaucaire’. It had been specially ‘tarted up’ for Sir Leslie Wilson (it even had a septic system!), who spent holidays there until he built his own house later.

A most unfortunate thing happened here one year! The garage was on a rise above the house, and one morning Ian and I decided we would back the car out and park it in the front drive. We installed Bronwyn in the driving seat with instructions to use the brakes as soon as we had pushed the car out of the garage. She panicked. The car charged back going right through the fibro wall of the house and ending up in the bathroom! Even after all these years, I can still see the adults rushing to the upstairs windows in terror. Poor Dad spent the rest of the holiday getting local workmen to repair the damage. I still remember the huge mess of seaweed (which had been stuffed in the double walls for insulation) spread throughout the house. It is no wonder that Dad often drove back from Caloundra to the shop at Wynnum for the day. It mustn’t have been much of a holiday for him!! 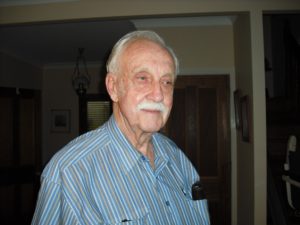 Looking back, the childhood years spent above the shop were a precious time. I feel sad, however, at the way business just tapered off with the arrival of the chain stores. Dad valiantly tried to boost things up, but I think that he lost heart after Mum had a major heart attack about 1952. He was used to having her beside him in all that he did, and although she made something of a recovery, she was never quite her energetic self again. We were continually trying to coax her to “take things quietly”, but she fought against it, sneaking downstairs at night to “straighten things up” and be with Dad in his office. He knocked back several offers to buy the business, thinking that things would come good. Finally, worry over the business and Mum’s poor health made things impossible and he was virtually forced to dispose to the most convenient buyer in mid 1966. This was the end of “Irvines” and the end of a long and loved career largely inspired by his much beloved mother, Amelia”.