My genealogy addiction commenced in 1982 with a simple question “Dad, do you know whether your father is still alive?” By then, Grandfather Cox would have been in his early 80s.

The reply was “I don’t know; I lost contact with him just after you were born and I have never heard from him since.” Dad gave me his permission to search records and do whatever else I had to do to find the answers.

Much has happened since those early days of the 1980s. My Dad passed away at the age of 60 in 1983 almost a year after I asked that initial question and before I found much of the information contained below. One of my toughest searches in family history has been trying to piece together the facts relating to my grandfather’s life. It has been tough going even though I have made contact with many family members over the years. Very few knew of his existence and those who did, did not know of his whereabouts. Even official records do not reveal too many facts, particularly his date and place of death. I have pondered many questions – are his remains buried in an unnamed grave? Did he die in a remote area and his remains never found?

If my grandfather was still alive, I would have written this letter to him to ask him if what I have found represents his life and to ask him to fill in the gaps. It would go along the lines of:

Let me introduce myself. I am your eldest grandchild. I know you are aware of my existence even though we have never met or ever spoken to each other. How I envy those who have copious numbers of photographs of their grandparents. There was a photo album in our house belonging to my Dad but there were no photos of you included in it. This was not by design but due to life’s circumstances. It took me years to be given the precious photograph of you below. When I received it in a letter from your sister, I can honestly say that the hairs on the back of my neck stood up. I thought I was looking at my Dad. 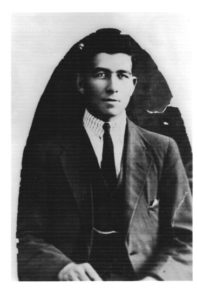 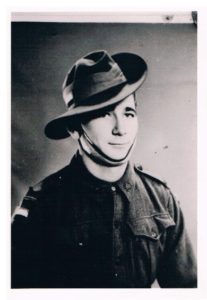 You have the same dark curly hair (how my Dad hated those thick curls), the same nose and even that left eye and brow looks the same. Your military record states that you had blue eyes, however – your son did not.

Unlike many people who have been fortunate to be told the story of their grandparents, I have had to write letters, search records and newspapers and read the social history of the time just to learn about events in your life. From what I have found, you were dealt many curve balls which lead me to believe that you had a tough life full of tragedy – tragedies that seem to focus on the special women in your life.

I was able to find that you were born on 12 April 1902 in Narrabri, NSW to Charles and Violet Elizabeth (nee Redmond). Even the registration of your birth name as Percy Michael was to confuse me as later official references to you, name you as Percival or Perse. Your father was 38 when you were born, double the age of your mother who was just 19. You had three brothers and six sisters, some of whom survived to adulthood whilst others died as babies.

I also learnt that you had a half-sister, Gertrude, who was born six years before your mother was born. Ironically, I have none of your son as a child.

From what I can gather, you spent most of your early life in the Narrabri/Wee Waa area as all of your younger siblings were born there also. You did receive a primary school education and your copperplate handwriting was impressive.

Were you worried when the Spanish influenza pandemic hit Australia when you were just 17? It certainly had a huge impact on your family. Sadly, your mother became one of the many Australians who lost their lives during that outbreak soon after giving birth to your sister, Eileen who died 5 days after your mother – how tragic.

I have included a cutting from the North Western Courier which announces the death of your mother. However, your mother’s death certificate indicates that the official cause of death was broncho-pneumonia, not complications of confinement.

I get a real sense of loss when I read the notice inserted in the local newspaper by your grandfather Redmond. It reads:


Ah well do I remember,
That sad and fatal day
It was on the 5th of June
My dear one passed away
The moonlight it is shining
Upon the lonely grave
Of my dear and loving daughter
The one we could not save.

The words “The one we could not save” suggests to me that other members of the family may have been affected also or perhaps these words were just indicative of how many other people could not be saved. One newspaper reported “Now that practically all of Narrabri is down with the flu, severe restrictions have been introduced there. Another case of locking the stable door after the beast has escaped” which is small consolation to you. I was to learn that your mother’s death was to mould your future life. Four of your five sisters, ranging in age from two to 12 years old, were sent to a convent in Singleton to be raised and educated by the nuns. Two of these sisters later entered holy orders. Your brothers and eldest sister were left to make their own way in life. By the 1980s, only two sisters were still alive. I did get to meet one of them at the convent where she was living and received that precious photograph of you from another. Sisters in the convent in the early decades of the past century were not permitted to communicate regularly with family so she lost contact with you. The other did write to me but rather cautiously. I’m sure she was wary of the fact that I was claiming to be your granddaughter – perhaps my letter was the first time she had heard of my existence.

After your mother’s death, you made your living by joining a boxing troupe. You worked the Show circuits, employed in the tents as part of the annual Show culture in country towns. I hope you were paid well for that time as it must have been tough to do this constantly – a beating whether you won or lost.

I am told that you met your future wife when the boxing troupe visited the Moree District. She was a very pretty 16 year old. You were only a year older yourself. One of her sisters told me that you were very handsome and debonair and you captured the heart of this young lady. Ada’s parents disapproved of the friendship, not only because of her age but because of your boxing – it being a disreputable occupation in those days. Nevertheless, young love prevailed and you met up again in Newcastle after Ada had left home without her parents’ blessing to join her sister there.

Your son, my father, was born there in December 1921. You appeared to have given up the boxing by then and was now employed as a labourer. I would love to know what my father looked like as a baby and as a child – I suspect those curls were prominent even then.

From what I can ascertain, your young family moved between Sydney and Newcastle probably because you were looking for work. Finding work was becoming increasingly difficult and there were many occasions when you had to leave your family alone whilst seeking employment. These were very hard times and I won’t remind you just how bad it was for them to feed themselves.

Until the day he died, Dad vividly recalled the day his mother became desperately ill – he remembered her screams of pain and he still shed a tear for her all those years later. The memory was very painful for him. You were away seeking work at the time and your eight year old son walked with his mother to the Balmain District Hospital as no one would come to transport her there. 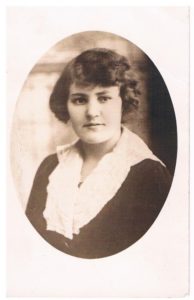 She died in terrible agony and it was only with the kindness displayed by a nurse who slipped Dad into the hospital to be with his Mum, that she did not die alone. At the age of 27, she had succumbed to a brain tumour (ironically, your son was to die of the same disease). I’m told that with the help of your boxing troupe friends, you were able to pay for her burial in the Field of Mars Cemetery in Sydney.

History had repeated itself – you, like your father, were left to raise a child without a mother. Dad told me that as a boy, he spent time going from one aunt to another. I can still hear him laughing when he told me the story that one of his aunts washed his mouth out with soapy water because of the foul language he had used. It was very tough for you also as you were forced to work in the labour camps developed to provide work for the unemployed during the Depression as well as trying to have a father’s influence in your son’s life.

As did your son, you joined the Australian Army and was deployed to the 1 Australian Garrison Battalion in Queensland. You recorded your next of kin as my father initially, which you later altered to your sister . Was this change required, because Dad was fighting in the Middle East and you feared for his safety?

After the War, you kept in contact with my Dad for a while. On learning of my birth (I also carry your wife’s second given name), you wrote to my Dad and told him that he was happy for you and as he now had a happy family of his own, your work was done. As far as I am aware, Dad never heard from you again and you quietly slipped into obscurity.

I do know that you lived in Balmain for a time in 1949 but after that, I cannot confirm anything of your life. I do not think you married again but perhaps you did and my Dad has siblings. Is that so?

In closing, I feel that I have grown to know you in some small way. I know there is much more to your story and perhaps someday, someone will contact me with information which will fill in those gaps. I can only hope.

Remembered by your granddaughter, Lorraine.

Postscript: If I could, I would love to visit your grave as a means of recognising that I knew of your existence and to thank you for giving me my father, a wonderful, caring and loving man. You would have been very proud of him.