As my previous blog stated, the resource known as the Parish Register in an invaluable one to the genealogist – both amateur and professional alike.  For me, as a genealogist by trade who works almost full time in the profession, the use of parish registers is now part of my modus operandi for every project.  Not only am I extremely grateful for the tireless work done by volunteers and others in getting more of these images scanned and available online – but I am just so thankful to some of the scribes, clerks, ministers, etc – now gone before us – who decided they would add “just a little bit more” than what was required, to a parish baptism, marriage or burial entry.  It’s due to these factual additions written within the pages of the parish registers, that I have been able to uncover extraordinary information about a client’s ancestral story; and as you continue to read you will see what I mean with the recounting of one of my most memorable finds.

A few years ago, I was researching the Morris family line for a client who lived in rural NSW.  His maternal line of Morris ancestors could be traced back to the village of Newnham in the county of Gloucestershire, England.  We were able to provide extensive information to the client about his ancestors who lived in this village for at least three generations, including the purchase of an estate house called Stears, which included 102 acres of lush farming land, where one Thomas Morris worked and raised his family.

Here is a small excerpt from the Morris report, which leads into the amazing discovery of an entry in the Newnham parish burial registers:

1788 – On the 5th March in the year 1788, the same year the first fleet landed in Australia, your ancestor Thomas Morris (2nd) married Mary Cummins in the village of Newent where she lived with her parents.  Thomas was almost 40 years old, and Mary was just 21.  After they were married they settled back in Thomas’ native parish of Newnham, and the following year Mary gave birth to their first child.  Gloucestershire parish registers record the baptisms of seven children born to Thomas and Mary; their names were:

Records prior to the 1800’s are sparse, and often we don’t find mention of ancestors in anything but parish registers – that is baptisms, marriages and burial records.  Sometimes, if an ancestor was wealthy or part of aristocracy, or had a criminal history, we might find mention of them in land records or court records.  With the Morris family we were fortunate to discover Thomas’s Last Will & Testament written in 1814 (mentioned later) and it was from this Will that we discovered that James and John, sons born in 1792 and 1794 (as above) were no longer alive when Thomas made out his Will.  Armed with this small piece of information we set out to find a burial record for either one of the brothers – and were very fortunate to find their burials in the Newnham parish registers online, in the database Gloucestershire, England, Church of England Baptisms, Marriages and Burials, 1538-1813 on Ancestry.com.  What we never expected was the account of their deaths; parish registers might sometimes mention a cause of death, such as “plague” or “smallpox” – and this is what we thought might be written for the Morris boys because the index listing showed that they both died on the same day, yet this is what we found written: 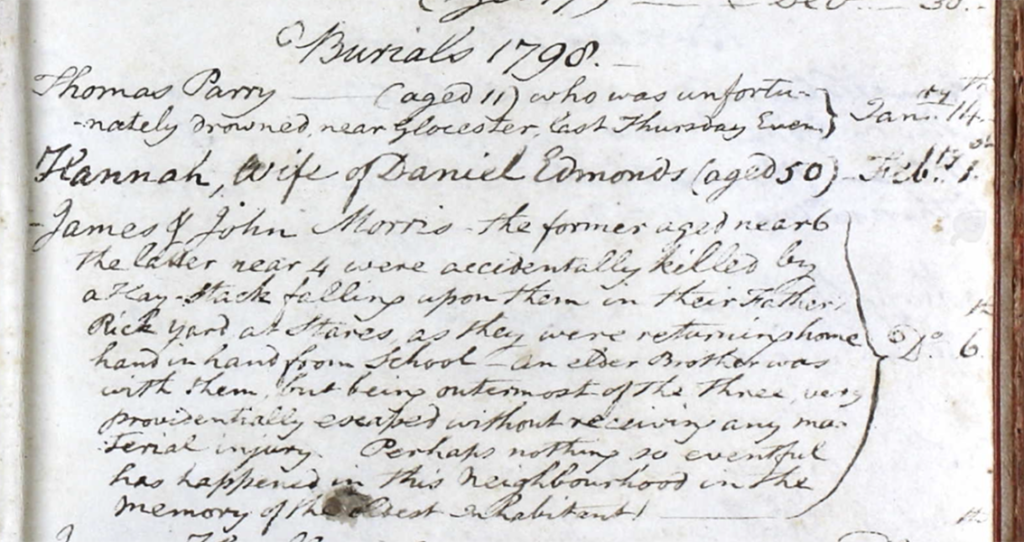 James & John Morris the former aged near 6
the latter near 4 were accidentally killed by
a Hay stack falling upon them in their Father’s
Rick yard at Stares as they were returning home
hand in hand from school – an older Brother was
with them, but being outermost of the three, very
providentially escaped without receiving any ma-
terial injury.  Perhaps nothing so eventful
has happened in this neighbourhood in the
memory of the oldest Inhabitant!

WOW!!  I still remember thinking WOW!!!  It honestly took a minute for all this to sink in – firstly that we had actually found a burial entry for the boys, and second, that we were given an actual cause of death!  And furthermore – the boy who escaped “very providentially” was my client’s direct ancestor!  What a tragedy – and what a story!

Of course, our Morris narrative continued to grow with information from other repositories and the like, but nothing ever really compared to this incredible find in the burial registers from the parish of Newnham.  Thinking back on it now – I still remember the feeling I got when I read it – incredible!

Always look at the original – and if you can’t access it yourself – then pay the often very small fee for someone else to access it for you; I promise, you won’t be disappointed, especially if it offers up something like that of the Morris story.