‘Half the harm that is done in this world is due to people who want to feel important…They don’t mean to do harm but the harm does not interest them..or they justify it because they are absorbed in the endless struggle to think well of themselves.’ T.S. Eliot

Australia’s national identity – strong, free and independent – had its genesis in the British values of individual freedom and parliamentary democracy. When Britain called upon its Empire to fight in the Great War of 1914-18, Australia responded with the Australian Imperial Force, an all-volunteer army of 417,000 in five divisions. Fiercely strong, reliable and loyal to the mother country, the AIF came to symbolise Australia’s national character. That loyalty would be tested when the AIF 5th Division sustained 5,533 casualties on the night of 19-20th July 1916 during a full-scale assault on Germany’s 6th Bavarian Reserve Division at Fromelles.

The 6th Bavarian had taken Fromelles in 1915, fortified its defences with three rows of trenches, solid concrete bunkers to protect against artillery barages and razor-sharp barbed wire encircling the encampment. They held the only high ground in the area from which to observe their enemy, and had good intelligence on allied troop movements and battle plans through intercepted phone messages and captured documents.

Since none of this information was secret prior to the night of 19-20th July, the Fromelles offensive seems not only reckless and foolhardy but near-suicidal: crossing 150m (300 yards) of open farmland exposed to enemy artillery and machine-gun fire – No-man’s-land.

The hopelessness of the attack must have been apparent to the Australians when men were mown down almost before they got out of their own trenches.  A few managed to get to the first line of German trenches but could not secure prisoners and hold the ground without reinforcements. There were no reinforcements because the allied artillery barrage that was supposed to have demolished the German defences and cleared a path for the assault force fell instead into no-man’s-land onto the advancing Australians. Those who survived the ‘friendly fire’ that night saw their mates hooked on barbed wire fencing, stationary targets for enemy machine-gunfire. The battle was effectively over within an hour.

Despite the tremendous slaughter, the Battle of Fromelles was largely unreported in Australia. In years to come, vaguely worded (well-meaning and no doubt sincere) official notifications regarding the fate of 1,917 ‘missing’ Australians whose remains had not been located, and therefore had no graves, left their families swinging on a pedulum between hope and despair. A few made the journey to the battlefield (time and resources permitting) in hopes of finding some clue to the final resting place of their missing soldier. For the rest, honour boards were erected, avenues of trees were planted, in towns across Australia, a tree for each of the fallen – tributes that omitted the location of the grave because the remains were not recovered.  Until…

… in 2000 Corfield published ‘Don’t Forget Me Cobber’ 1, attributing the horror of that night’s losses to the hubris of men trying to prove their own importance, by under-estimating the opposition in order to achieve unrealistic objectives. Following Corfield’s meticulously researched account, Lambis Englezos and the archaeology unit from Glasgow University located the mass graves at Fromelles in 2009 and the belated reunification of these men with their families began, two generations too late.

The generational toll is incalculable: children growing up without fathers, wives without husbands, parents without sons and daughters; there were casualties amongst members of the Australian Nursing Service too. Some families lost more than one son in the Great War, some lost father and son(s) – all those bright young lives, extinguished too soon. 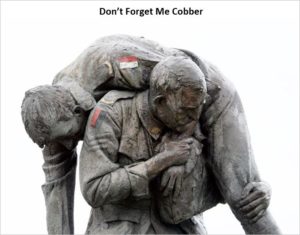 Not every WWI Australian death occurred on the battlefield. Of the 62,000 Australians who perished in the Great War, at least that many again died within months, at best a few years, of returning home, wounded in body and spirit. The price of loyalty.