I have heard stories about you all my life.

I would see our family name on the Toowoomba Mother’s Memorial and ask, “Who was GH Maag?”   The answer was always the same.  “That’s Uncle George.”  As a family, however, we knew little more than that you fought in WW1 and the family story that your life had been saved during fierce fighting in The Great War because a bullet had struck a cigarette case in your breast pocket instead of lodging directly in your heart.  But Uncle George, who were you?

I have images of you in my mind, you as a child, having inherited the long, lean look of your Swiss German ancestors.  I can see you running through the streets and fields of Meringandan, your skin browned by the hot Queensland sun and the soles of your feet hardened as they rhythmically came into contact with the richly fertile Queensland soil for which the Darling Downs is still known.  Did you enjoy playing games with your friends at the small school you attended or were you more academically inclined?  Did the gap in your education, between grades 2 and 4, impact your ability to read and write and do ‘rithmatic?

What were the joys and challenges of your childhood, being born and raised in the late 1890s in a rural community that relied strongly on agriculture?  Did you pull your sister’s pigtails and annoy her as younger brothers tend to do?  Were you close as the only two surviving siblings of your father’s first marriage?  Were you ever told of your older brother’s existence?  Did you know his name, that he was three years older than you or that he died at the age of 5 months from convulsions caused by teething?  How, or even did, your father or grandparents explain the death of your brother or that your mother died during your first year of life?  What impact did these losses have on you as you grew into the man you became?

How did you react when your father remarried to a woman whose Scottish family was well respected in your local community?  Did you like her? Did a maternal instinct she may have had extend to you and your sister?  Did you like your step siblings?  Was yours a harmonious household or did these new relationships bring with them their own set of struggles? There is a family story that you would send one of your younger step brothers on errands to purchase packets of cigarettes for you.  You would never be able to ask this of a minor today but then the world has changed very much from the one that you knew.

Your paternal father and grandfather were carpenters, responsible for building local schools and churches and both paternal and maternal relatives made donations to the building fund for the German Lutheran Church in Djuan.  When asked about your religion you always indicated Presbyterian or Lutheran, the faith of your fathers.  What impact did their faith have on you?  As a carpenter by trade, could you have known you would be one of many Maags, five generations to date, of ‘tradies’ who are well respected for the quality of their work, and that being apprenticed to your father would not be unique?  Did the manual labour this job required leave you strong and fit and physically ready for the days to come? 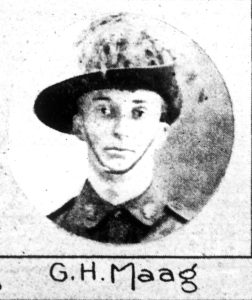 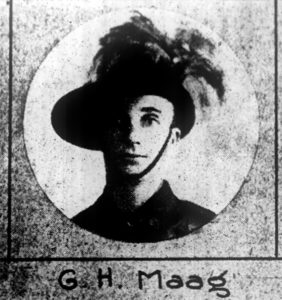 When my brother and I look at your WW1 enlistment photographs, my brother questions whether the subject of each image is the same person.  I see, in the first, a man youthful in appearance.  Could the second have been taken during or after military training, showing a man slightly more hardened by life, perhaps as a result of becoming proficient in the use of weapons and being mentally conditioned to take the life of other human beings?  Did your family look proudly at these photographs and at you in your uniform, your clean shaven, 5 foot 9 inch tall self?  Were they, were you, proud to see you serve God, King and newly adopted county?  As recently arrived Germans were they concerned that you were returning to the Mother Land?  Did they experience a sense of divided loyalty?  Did you?  Were they worried about your safety?  Were you?  Or was the whole experience seen as a Boy’s Own Adventure, a chance to fire a gun, muck in with the lads and see a world far away from the rural vistas of the Darling Downs?  Did the journey to Sydney, the city itself and the Ormond loom large in your ‘country boy’s eyes’?  Was the voyage rough or calm?  Was it relaxing or were you kept busy with drill and exercise?

After landing in England and travelling to Suez, what did you make of the ancient sights, fragrant aromas and raucous sounds of Egypt?  Did you really contract measles or were you quarantined, along with others, to limit an outbreak among Australia’s Imperial Forces?  As you saw action, did you grieve the loss of mates with whom you bonded closely or did you thrill at the excitement of war?  Were you increasingly disillusioned as you encountered the mud of the trenches and the blood, injuries and death you saw around you or, to the end, were you convinced of the rightness of Britain’s cause?

As your battalion began to advance on their objective in the morning of your last day on earth, was the dawn breaking or were you forging ahead in predawn darkness?  Were your ears assaulted by the sound of gun and cannon fire or was there an eerie silence?  Could you smell, even taste, the odour of smoke or was there only the breathing in and out of crisp European air?  Did you feel any pain, was your sight blinded, by the shell that exploded around you?  The shell that hit at least one other private, completely severing one of your legs and shattering the other.  Were you in pain as stretcher bearers carried you to the Dressing Station?  The cheeky sense of humour for which you were known seemed to carry you through, one mate describing you as quite a lad. “I’ve got a Blighty this time”, you said, considering your wounds not to be fatal but severe enough to be removed from the fighting.  Those who knew of your death were surprised to learn these wounds did claim your life.

What would you think, if I could ask you now, of being buried beside the road in the sort of make shift cemetery used in times of war or that your remains were reinterred in a military cemetery where your final resting place is marked by a headstone with the simple outline of a cross? 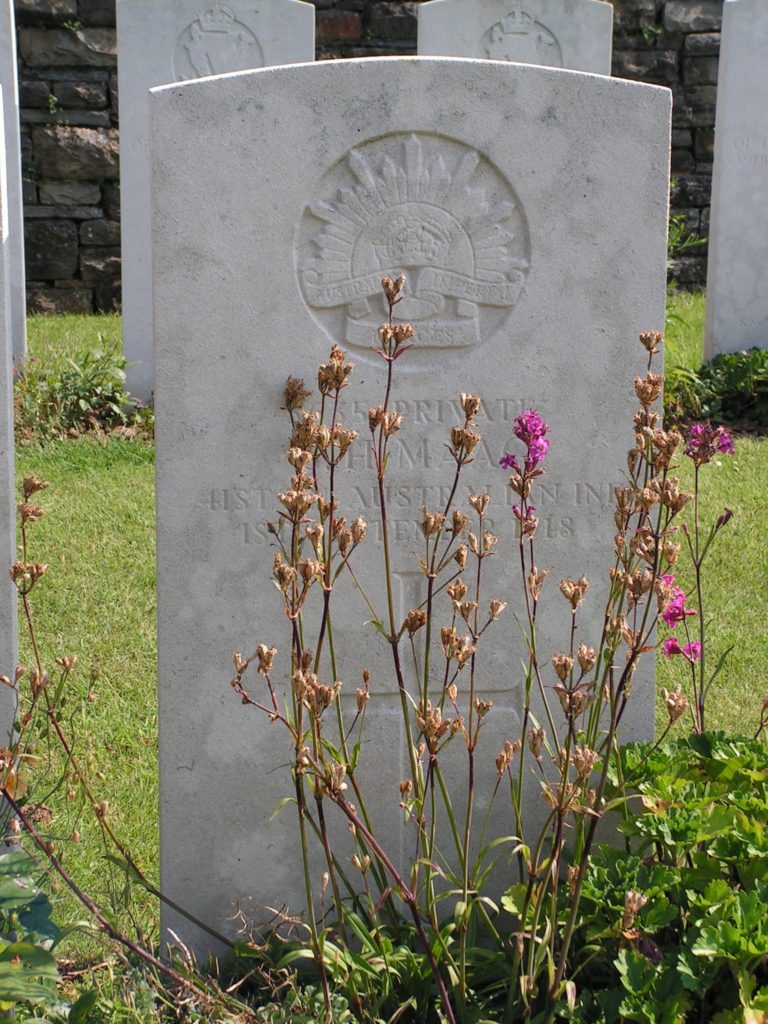 How did your family feel to see your name in black and white, Died Of Wounds, Geo. Henry Maag, Toowoomba, 1/9/18, to mourn with no question of your returning to them?  Could you have known that your name would appear on the Mother’s Memorial in Toowoomba, honour rolls at Kingsthorpe, ANZAC Square in Brisbane city, the Australian War Memorial in Canberra and St Andrews Presbyterian Church?  Could you have known about the family story that would develop that your name was originally omitted from the Soldier’s Memorial Hall Honour Roll but was added later as a result of your stepmother storming in and demanding your name be included?  Would you be proud to know your name still shines brightly in gold against the polished dark brown wood along with other local boys who paid the ultimate price?

Finally Uncle George, was the story of the cigarette case true or a case of Chinese Whispers, a story that had grown from a small kernel to take firm root in Maag family lore?  Would you have been surprised to know that the Australian Imperial Force sent a list of your belongings to your father as your Next of Kin?  A testament and two religious books, a purse and coins, a knife and your unit colours but listed among these and other particularly unremarkable effects was a cigarette holder and one metal cigarette case.  Did your family receive these effects after your passing?  Did they receive the cigarette case?  Was it marked or dinted by the impact of the now legendary bullet?  Is this story more true than some of your nephews know?