I had always thought if I had convict ancestry I would have liked to be a descendent of someone who arrived on the First Fleet and be part of the Fellowship of First Fleeters. So when I found a convict, Sarah Chapman, in my lineage I was slightly disappointed that she did not arrive until December 1801 on the Nile which was 13 years after the arrival of the First Fleet in Sydney Cove.

I wrote about Sarah Chapman in the June 2018 Generation. During my research I found out that she had given birth to a daughter in 1802 (Elizabeth Chapman from whom I am descended) and the father listed on her baptism record is a John Harris. At the time, I was focused on Sarah and Elizabeth’s stories so did not investigate him but I did note he was a member of the NSW Corps and came out on the Second Fleet (1790) as the Surgeon’s Mate. Well it wasn’t the First Fleet, but close!

I formed a rather poor opinion of this John Harris when I was writing about Sarah Chapman, my 3x great grandmother, because although he appears on the baptism certificate as Elizabeth’s father, he never married Sarah and probably did not support her. She went on to have 10 children living with three men until she married the last one, Richard Francis, in 1818. In 1801 when she arrived in NSW there was no Female Factory which, although a tough place, was somewhere women could seek refuge. Sarah was alone and trying to make her own way in the colony.

The John Harris we believe was Elizabeth Chapman’s father was born at Moneymore, Londonderry, Ireland in 1754 and studied medicine at the University of Edinburgh. He became a naval surgeon in India for 10 years and then was appointed as a surgeon with the NSW Corps in 1789. [1] He came to NSW as surgeon’s mate on the Surprize one of six ships of the infamous Second Fleet which arrived in Sydney in June 1790. John and Elizabeth Macarthur also came on the Second Fleet and John Harris was present, because he was a surgeon, when a bloodless duel took place between John Macarthur and Thomas Gilbert, the master of the largest ship the Neptune, before the ship left Portsmouth. John Macarthur had complained strongly about his family’s accommodation on the ship which bought him into conflict with Gilbert. He was eventually transferred to another ship of the Fleet.[2]

The Second Fleet became known as ‘The Death Fleet’. The Surprize, Neptune and Scarborough had the highest mortality rate in the history of penal transportation. [3]The Surprize had 256 convicts and a crew of around 40 men which included the surgeon William Waters and John Harris. One soldier and 36 convicts perished during the voyage to NSW, 126 required hospitalisation on arrival and many died in the months after disembarkation. [4]John Harris spoke about the ‘…great cruelty that, was practised towards the convicts that were on board…[which]…. turned my blood cold…They were often up to their waists in water, and the irons on their legs were barbarous.’[5] 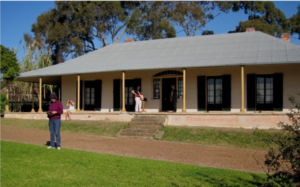 Experiment Farm at Parramatta in 2014

His job on arrival in NSW was to attend to all military personnel so he was posted to the military barracks at Parramatta and promoted to surgeon in 1792. When a sick Governor Phillip left the colony in 1792, Francis Grose, commandant of the NSW Corps, took over the colony for two years and, unlike Governor Phillip, he was amenable to offering land to officers in the NSW Corps. Hence John Harris was granted 100 acres at Parramatta in April 1793 and in October of that year he bought Experiment Farm, also at Parramatta, from James Ruse which extended his holdings. James Ruse was a convict and had been granted the land by Governor Philip in order to prove that he could be self sufficient by farming the land. John Harris built the cottage, which stands on this site today, in about 1835.

In 1801, John Harris moved to Sydney to become the Naval Officer of the colony when William Balmain left but he also continued the role of surgeon to the military. In addition he accompanied James Grant, as the surgeon, when he explored the Williams and Paterson Rivers in 1801. 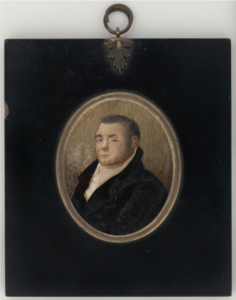 It was at this time he must have met Sarah Chapman, my 3 x great grandmother. Perhaps she had been assigned to him when she arrived on the Nile on 14 December 1801. Sarah gave birth to a daughter, Elizabeth, sometime in 1802 who was baptised at St Philip’s, Sydney on 19 December 1802 and John Harris is listed as the father and the birth date as 19 April 1802. [6] The birth date would mean that Sarah became pregnant on the Nile on the way to NSW but John Harris was not on that ship so the date is inaccurate. At this time baptisms usually occurred a couple of months after the birth so Elizabeth was probably born in October/November 1802. A convict Francis Harris, who became known in the colony as John Harris, was on the Scarborough one of the ships of the Second Fleet but current research appears to favour the surgeon John Harris as the father.

There is some evidence John Harris did ‘look out’ for Sarah Chapman and his daughter. In the muster (a census) of 1806, Sarah was living in Sydney with Aaron Peckham who was a constable. John Harris doubtless knew Aaron Cook (alias Peckham and Heathcote) as Cook came to NSW as a convict on the Surprize, the same ship as John Harris. Aaron Cook had been transported for 7 years in Winchester, Hampshire on 6 March 1787 [7] but by this time he probably would have had his freedom and perhaps Sarah had been assigned to him. [8] At the time of the census they had two children, Elizabeth who would have been four years old and Mary Ann Heathcote (the name of one of Aaron Cook’s aliases). [9] Sarah had already had a baby, George, who died in 1804 and she had two more children with Aaron Peckham, Louisa and Thomas.[10]

About 1819, her eldest daughter Elizabeth Chapman, my 2 x great grandmother, now aged 17 travelled to Hobart to marry Charles Hardwicke. He had arrived in Sydney on 7 February 1814 as third officer on the convict ship General Hewitt. The captain of this ship had treated everyone very harshly so Hardwicke requested permission from Governor Macquarie to stay in NSW. John Harris recommended that Charles Hardwicke should be permitted to remain in NSW [11] so he must have known him. Charles Hardwicke moved to Launceston around 1817 to take up a land grant so he may have fallen for Elizabeth before his departure or his friend John Harris arranged for his daughter to move to Van Diemen’s Land.

During this time John Harris was given another grant of 34 acres by Governor King on the Pyrmont-Ultimo Peninsula. The estate was called Ultimo and was named after the clerical error which had been made in a legal case against John Harris. His offence was noted as occurring on the ‘ultimo’ (the previous month) rather than ‘instant’ (same month) and this mistake saved him from being court-martialled. [12] He built Ultimo House on this land in 1804 a stately two-storey country residence which stood on a rise overlooking Cockle Bay, which is one of the bays in Darling Harbour.

He returned to England, aged 56, in 1810, to give evidence in the court martial of George Johnston for his role in the Rum Rebellion, and also visited his family in Ireland. He married Eliza Jones on 17 August 1813 at Saint Paul, Covent Garden who would have been 21 (he would have been 59) and they returned to Australia in 1814. He resigned his commission with the army and was given permission to become a private settler.[13]

On their return to Sydney, John Harris and his wife lived at Ultimo and a Mrs Cox’s reminiscences of this time which were published in 1921, provide some insight into their life.

I must not forget to mention a Dr. Harris, who made one of the pleasant society in Sydney. In the first place, all Ultimo belonged to him, and there was a good house on it when he returned to this colony from England, where he had been summoned as a witness in the Bligh business, when he had married. He was a very merry man, and sang pleasant songs. He had been in the army from his youth. He had suffered from a paralytic stroke before we knew him, but he used to walk to old St. Philip’s from Ultimo House very frequently. He kept no carriage. Mrs. Harris was a fine busy woman. She had no family, but a young nephew named John Harris used to reside with them, and she liked to have young people of his own age out in large parties. Dr. Harris, although lame took it into his head that he would go out with Mr. Oxley [1818] and other gentlemen to explore the North of Bathurst… He returned to Sydney before the rest of the party, and found that his wife had added extensively to Ultimo House. As he did not like living in so large a house, he let it, and retired to Shanes Park, a lovely spot on South Creek, where they both ended, their days. Dr Harris was a great reader and a gentleman.[14] 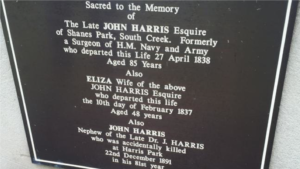 John Harris was buried in St John’s Cemetery in a vault which is one of the oldest in the cemetery.

As she recalled, they moved to Shane’s Park at St Marys in 1821 and Ultimo was leased. During this period he was on many committees and was one of the first directors of the Bank of NSW in February 1817. On his death in 1838, he had extensive landholdings in Parramatta, Ultimo and Five Dock.

John Harris has an interesting story but I cannot help but think of Sarah Chapman struggling with her 10 children while he lived a very privileged life on his vast land holdings. It does appear that he may have helped her in a small way but perhaps if he had acknowledged his daughter he may have been surrounded by grandchildren in his old age. But then that would have been another story.