Sarah’s photograph sits on my bedside table, and every day when I look at it, I think of what this picture of my much loved grandmother portrays.  What I see is that Sarah Sommer was a no nonsense lady, stylish at all times, determined and capable. This description fits Sarah to a ‘T’. 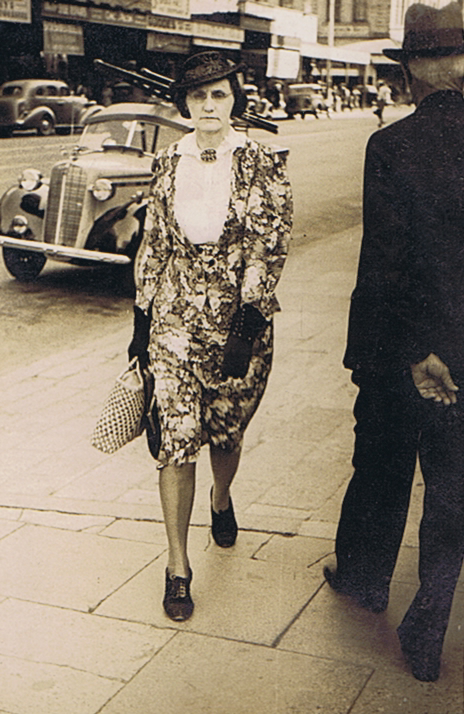 Born into another era, Sarah made her entry into the life of Christian and Anna Louise Sommer (maiden surname Stephan) on 22 September 1887 with her birth registered at Mt. Walker in Queensland.[1]   Both of Sarah’s parents were born in Prussia and all of her mother’s large Stephan family from Silesia settled in the Fassifern Valley.  In all Sarah had 82 first cousins on her mum’s side!

With her six siblings and two half siblings, Sarah grew up at her parent’s farm at Sommers Road, Dugandan. The area is on the outskirts of Boonah where life on the Sommer farm was far from pleasant, with her father frequently abusing his wife Anna Louise with sad consequences.[2]

Sarah was confirmed at the Dugandan Lutheran Church on 5 October 1902 and my Uncle told me that she left home fifteen months later to take up employment in Brisbane as a housemaid to a family named Sargeant who lived in Kelvin Grove.[3]  After her older sister Louise Sommer married, Sarah lived with the couple in their residence behind Louise’s general store, which was on the corner of Musgrave Road and Storie Street, Red Hill.

Five years later a young Scots-Irish man by the name of Robert Wilson came into her life. Robert’s birth had taken place on the immigrant ship ‘Duntrune’ in the waters south-east of Sicily on his family’s journey from Scotland to Brisbane.[4] His parents were James Wilson and Margaret (maiden surname Virtue) who were both born in Fermanagh, but separately settled in Renfrewshire in Scotland  during the 1860s. The couple married there in Paisley on 29 December 1871.[5]

The Wilson family was large with nine boys and two girls and they welcomed Sarah into the fold whole-heartedly.  Sarah and Robert married in The Mission House, Leichhard Street, Spring Hill according to the rites of the Joyful News Mission Church on 24 February 1909.[6] The couple’s first home was in one of the houses owned by Robert’s father in Harriet Street, West End. By this time Robert’s father James owned five houses, three or four of them in Harriet Street and another in the street behind the family home. James and his wife, Margaret lived in one and their children lived in the others with their young families. 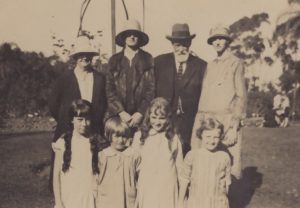 In 1928 Robert, Sarah and their four children ranging in age from a baby to 19 years old, moved to the corner of Raven Street & Old Cleveland Road, in the Brisbane suburb of Camp Hill.  At this stage, trams were running to the old Camp Hill Terminus near the intersection of Bruce Street and Old Cleveland Road. As the family never owned a car, they either walked or travelled on the growing tram network.  My uncle recalled that they would often walk to Coorparoo and Stones Corner.[7]

There were frequent family gatherings of the extended Wilson clan at each other’s homes, outings around Brisbane or on beach holidays. Robert and Sarah also loved nearby country breaks and began spending time in the Canungra area and then Tamborine Mountains where they would stay in guest houses. You can read more about the native inhabitants, waterfalls and a short history of national parks in Tamborine. 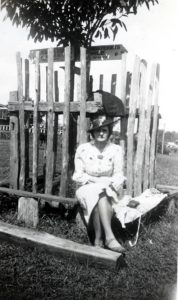 Sarah at the cross-roads at the northern end of Gallery Walk, Tamborine Mountains. Photo taken Feb 1943 and now held in author’s collection.

During the depression Robert went on relief employment for Brisbane City Council where he was put to work making concrete footpaths. About 1942 he began work as Head Storeman of a company with premises where Southbank stands today on the southern side of the Brisbane River.

One work-day in 1946 the boards forming a section of the wharf collapsed under Robert and he fell through ending up with his leg jammed between rocks on the riverbank. Luckily it was low tide at the time. After a night in the nearby Mater Hospital he was discharged, having learnt that he had a clot in his leg as a result of the accident. Sadly, shortly afterwards Robert passed away in Brisbane Hospital on 1 August 1946 at the age of 63 years. His cause of death was stated as cerebral haemorrhage (1 day) and hypertension (years).[8]

Sarah was just 59 years at this time and after 37 years as Robert’s wife, she was to spend a further 35 years as a widow. Her two sons were bachelors living at home, so both were good company for her, as was her daughter Iris, who lived a ten-minute walk away. Sarah’s oldest grand-daughter was school aged, so called into Grandma Wilson’s on her way to school. It was her job to then walk to the butcher shop at Camp Hill terminus to buy liver for Grandma’s cat Kitty and take it back to the house, before she crossed the road to Camp Hill Primary School.

I was born a couple of years later and named Roberta, after both my grandfather that I never got to meet, and ‘Roberta’ a 1935 musical film starring Ginger Rogers & Fred Astaire.[9]  My grandmother’s home became a ‘go-to’ for me once I began kindergarten in a converted house conveniently located almost next door to Sarah’s. My sister walked me to and from Grandma’s, who then took me to kindy. 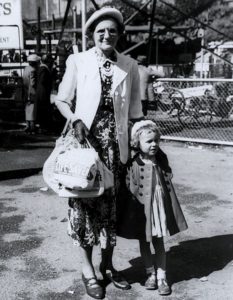 From an early age I loved spending a weekend at her place, probably every 2 to 3 weeks, where under Grandma’s firm rule there were definitely no tantrums or ‘mucking around’. I loved exploring the gardens my uncles had created and I had all sorts of imaginary games in them, the fernery and under her fig and loquat trees. Sarah and my Uncle Harold usually took me to either the Mount Gravatt Show or the Brisbane Ekka each year, where I was allowed a ride on the Merry-Go-Round, maybe a go on the Laughing Clowns and a show-bag. Heaven!

About once a month Grandma, Harold and myself went on the Friday afternoon bus to Eagle Heights, stopping at Beenleigh, amongst other places along the way. I particularly remember that stop as it was outside a bakery, and as it was getting quite late by the time we arrived at the Mountain, they usually brought a bite to eat there. The Guest House was in Eagle Heights Road, and the bus dropped us off by the very old English Oak tree outside Staffsmiths, the general store. This store has now been replaced by Staffsmiths Park.

My uncle then purchased a block of land in Wonga Wallen Road, Eagle Heights and began building a weekend cottage on it, which he named ‘Rocky Cabin’ when completed. It consisted of one room the size of a single garage, with an outside ‘loo’ under the tank stand, and we three slept on camp stretchers. His block was the last developed one before the forest began; backing onto MacDonald Park rainforest, near where the Tamborine Mountain Botanical Gardens now stand.

All three of us thoroughly enjoyed these visits as we all loved the Mountain. It was reasonably undeveloped in the 1950s & ’60s with the local dairyman delivering our milk in a churn and topping up the billy Grandma stored it in.  Gradually Harold established a beautiful garden on his block which was made up of huge rock retaining walls each terraced with a garden. Even though it was untended between visits the red volcanic soil and good rainfall meant that the azaleas and fuschias etc. that he had planted flourished.

In the years leading up to the 1950s, Wonga Wallen Road had been used by the timber-getters to get their logs down to the mills in the Coomera/Nerang region.[10] A part Greyhound dog was left behind after they left and Harold’s neighbours took him in and named him ‘Boy’. When we were at ‘Rocky Cabin’ Boy always kept us company.

Most visits Grandma, Harold and myself walked many miles up and down the roads made in the past by the timber-workers, or we walked to different National Parks to follow the paths there. Waterfalls, scenic views of the coast and hinterland, as well as beautiful birds or animals were usually observed, that is when the dog had raced far enough ahead not to disturb them. Many of those timber-cutters’ roads and paths we followed are now swallowed up by the rainforest and not accessible. At this time Sarah would have been in her 70’s, and was certainly a fit lady. 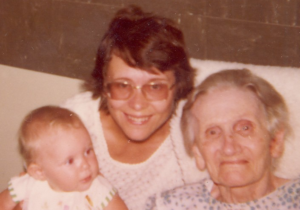 Sarah’s great-granddaughter Joanne, myself and Grandma Wilson. Taken in January 1979 and held in auhtor’s collection.

Sadly it became apparent some years later that Grandma was suffering from early dementia, and from that point on, she lived with one of her children for a few months at a time. It gradually got very hard to cope with her illness and the hard decision was made to place her into care. A nursing home was found at New Farm with Sarah’s sons supplementing the fees charged.

During the first few years Grandma ‘ran-away’ from the home numerous times. At this time my Mum and her siblings would travel to the home to try and assist in settling her down once she had been found wandering the nearby streets. All the family visited Sarah frequently, but sadly she didn’t know us and towards the end of her life she stunned staff by reverting to speaking in German. It seems the earliest memories really do last the longest. Dementia is such a terrible disease; the picture of my much-loved Grandma curled up and looking blank is still with me all these years later.

This strong soul carried on in her sickness for many years, passing away on 17 November 1981 at the age of 94 years.[11] Sarah Wilson was buried at Mt. Gravatt Cemetery in the plot almost behind her mother’s, a plot that she and I had walked to from Mt. Gravatt tram terminus many times through the years.[12]

My sister has a red suede booklet approximately 6cm x 10cm that had belonged to Sarah. On the top of the first page, my mother has written ‘Sara (sic) Wilson wrote this’. The verse, exactly as Sarah wrote it, is included in part below: 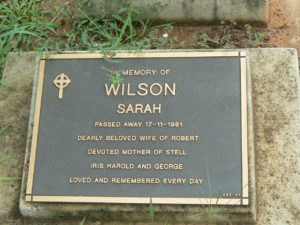 ‘I am thinking as time slips away in distance how many good things life has given to me and somehow I know that my way will be guided through all of the journey that yet has to be. It is true that my path has not always been Pleasant – I have known lots of trouble and deep sorrow too, but always when hope seemed to flicker and vanish, I’ve found a new courage and strength to pull through”

“One thing, God has always been good and kind to me. That has always help me to go on and try to be as happy as I could and a few kind words help me quite a lot, also kind deeds does really help too.I thank every one for all they have said and done for me. I thank you all from very bottom of my heart once again when I am gone I will be very happy”

“I am getting very tired lately I suppose everybody does when they are my age. So when my time comes I will be ready to go. So never worry when I am gone. Love to all.

As it happens Sarah did not pass away until many years after writing this message. R.I.P. Sarah Wilson, I treasure your photographs for the wonderful memories you brought to my life.

[7] Stones Corner is now included in the suburb of Greenslopes