They have been so sadly tormented by the mosquitoes, especially Mrs Cater, and Mrs O’Brien suffered no little. Yesterday was a most oppressive day on account of the heat. [1] 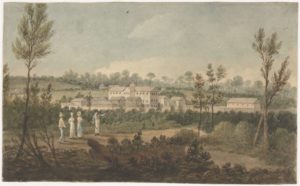 Mrs Cator and Mrs O’Brien were two of five Irish Sisters of Charity who arrived in Sydney from Ireland on the last day of 1838 and After residing some weeks in Sydney, they established themselves in a house founded for them in Parramatta, that they might be able to attend the unhappy female convicts in the great prison and in the workhouse.[2]  The searing heat of Parramatta must have been unbearable as they walked everywhere and were dressed in black serge habits. The Sisters had very few resources, no permanent home and relied on gifts and donations to support themselves.

I came across these women in the research I have been doing on my great great grandfather and grandmother, Thomas and Sarah Bell, the keeper and matron of the Female Factory at Parramatta between 1836 and 1843. The Sisters of Charity had commenced their work at the Factory during the time the Bells were administrators there so I hoped that I may find direct mention of them from documents or at least obtain more background on life at the Factory. My search commenced at the Sisters of Charity of Australia Congregational Archives at Potts Point where I found the Annals of the Irish Sisters of Charity in Australia 1838-1882 which is a compilation of memories by Sr M John Baptist de Lacy, one of the five Sisters of Charity. 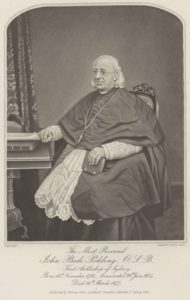 The five Sisters of Charity were the first religious women to come to Australia.  Bishop John Bede Polding, the first Catholic Bishop of Australia, had arrived in Sydney four years earlier and had seen the great need for pastoral care for the convicts, particularly the female convicts. He asked Mary Aikenhead, the founder of the Sisters of Charity in Ireland, to send sisters to administer to the female convicts. The five sisters who volunteered to come were Sr M John Cahill, Sr M Lawrence Cater, Sr M Francis Xavier Williams, Sr M Baptist de Lacy and Sr M Francis de Sales O’Brien.[3] The Sisters left Ireland in August 1838 on the Francis Spaight with Dr William Ullathorne, the Vicar General of New South Wales, and arrived in Sydney on the last day of 1838 first visiting the Female Factory a Parramatta on 20 January 1839.

About 800 women and children assembled in the yards and corridors [about 500 were Catholics] to be presented and years later [it was] impossible for them to describe joy and gratitude of women as they welcomed the Sisters to their wretched abode…They received our Instructions with respect & attention, and before three months had elapsed we had the consolation of hearing from the Excellency the Lady Gipps, and from the Superintendents, that cursing, blasphemy and the hitherto daily use of improper language was much diminished.[4]

Governor Gipps had given his permission for the Sisters to visit the Female Factory and they went there twice daily from six to seven in the morning and evening and taught the children at the school during the day. They not only provided religious instruction to the women but they taught them needlecraft (supplying them with sewing kits), singing and classes for both the women and children.[5]  They recommended that needlework and laundry work should be implemented rather than, what they considered as un-feminine occupations, breaking stones and sawing wood which the third class women did. Governor Gipps appears to have taken this on board as laundries were built and work rooms arranged at the Factory from the beginning of 1839.

In 1836, the Church Act, drafted by the New South Wales Attorney-General John Plunkett and enacted by Governor Bourke, had established legal equality for Anglicans, Catholics, Presbyterians and later the Methodists. However, the Act was not able to limit sectarianism which had increased with the influx of Irish Catholic immigrants; Protestants tended to combine the words Catholic and Irish. Bourke, in his reorganisation of the Factory in 1836, included a new position of Roman Catholic Chaplain at the same salary as the Anglican Chaplain of £50 which enabled the Catholic clergy to visit more often. This probably prompted Mrs Leach, a Matron of the Factory, to write to Elizabeth Fry that The Roman Catholic Priest is admitted at all hours…’ and Mr Clapham, the Keeper at the Factory, to declare that ‘Popery is at the head of it [Factory].[6]   Bourke had also replaced the Board/Committee of Management with a Visiting Magistrate which reduced the power of Samuel Marsden, the resident Anglican chaplain at Parramatta, who had been on the Board and a constant visitor to the Female Factory.

The female convicts were obliged to go to morning and evening prayers and Sunday services. They attended prayers in the mess rooms with the Roman Catholics in one and the Protestants in the other and they were further divided by class with the first class standing along one wall and the second class on the opposite wall.[7] 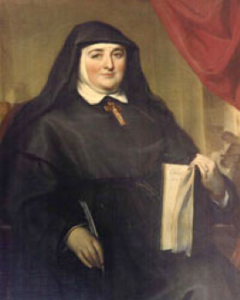 Mary Aitkenhead, foundress of the Religious Sisters of Charity. Depicts the habit worn around the time the Sisters arrived in Australia. http://staging.sistersofcharity.org.au/who-we-are/

The Sisters’ presence at the Factory fuelled the bitterness which was growing between the Protestants and the Catholics over the perceived power being wielded at the Factory. William Westbrooke Burton, Judge of the Supreme Court of New South Wales, was particularly vocal;

The influence of the “Sisters of Charity” over the Female Convicts confined in the Factory (or Penitentiary) at Parramatta…may be expected to end in…numerous illegitimate children will be baptized into the Church of Rome…From two to four or more Priests, and six Sisters of Charity  are labouring day and night amongst us… making their ” exits and their, entrances”, diffusing in all directions the subtle poison which lurks under a fair exterior.[8]

The presence of the Sisters was a check on the ill-conduct of many of the officials, who had hitherto indulged in certain evil practices. They determined, therefore, to free themselves from this restraint, and get rid of the Nuns at any cost. Malicious and preposterous stories were circulated…There was next a hue and cry against proselytism, and the officials also complained that the visits of the Sisters interrupted the work of the prisoners, to the detriment of the public interest’.[9]

An example of the sectarianism can be seen with the children in the Female Factory who, once they reached the age of three, were transferred to an orphanage.  It was Sarah Bell’s job, as matron, to provide the Governor with a list of the children. On 5 January 1839, she forwarded the names of the children who had arrived on the ship the Margaret that day and Governor Gipps gave approval noting that they be sent … to the Orphan Schools and Roman Catholic Institution according to the religion of their parents.[10]  But William Ullathorne, the Catholic Vicar-General, complained that …ten boys, nearly all the children of Catholic mothers and baptised in the Catholic Church had been sent to the Protestant orphan school at Liverpool and that  Thomas Bell had been directed to send 19 girls, 13 of whom were children of Catholic mothers, to the Protestant orphan school at Parramatta.  Mr Bell has, at my solicitation retained the catholic girls in the factory… until advice was sought from the Governor. Ullathorne noted that a destitute child must be educated in the faith of its parent and that the Protestant orphan schools were able to take in the Catholic children because they had a ‘superfluity’ of funds while the Catholic Orphan School could only fund 70 children. Governor Gipps directed Charles Forbes, the Visiting  Magistrate to the Female Factory, to investigate the matter. He found that only four children had been sent to the Protestant orphanage and he had spoken to two of the mothers (the other two had already been assigned) …and they begged that their  children might be allowed to remain there. Perhaps the women were pragmatic and realised that the quality of life for their children would be better at the Protestant institution as it was better resourced.

Two of the Sisters of Charity moved  to a small cottage near the government-funded Roman Catholic Orphan School at Waverley for boys and girls in November 1839 to organise this school until 1840.[11]  Bishop Polding believed that under their care the children …will become, I am convinced, honest and virtuous.[12]

Sometimes stories of people who lived or worked with one of your relatives can provide information on them or their environment. I did not find explicit references to Sarah and Thomas Bell but following the story of these religious women, who ventured to New South Wales so long ago, provided me with a much better idea of the state of religion in the colony at the time and that even after the Church Act was passed in 1836, sectarianism was very much alive and well, particularly in the Female Factory at Parramatta.

[5] SRNSW, Colonial Secretary, Returns of the Department of Female Factory Parramatta, 1836-1843. A school master, or mistress was included in the workforce changes made by Governor Bourke in 1836. but the position is not included on the 1839 Return (perhaps because the Sisters of Charity were there).

[6] Parramatta Female Factory 1838: Correspondence between Secretary of State for Colonial Department and the Governors of the Australian Provinces on the Subject of Secondary Punishment, ML Ref. A1813, pp. 5, 7.

[12] Sisters of Charity of Australia Congregational Archives, SER/66/3, Davis, Sr M Gertrude. Annals of the Australian Branch of the Irish Sisters of Charity, 1908, p. 77. Bishop Polding’s Report to the Central Council of the Propagation of the Faith, 10th January 1840.