I entitled this post Writing my family story as that is what I’ve been doing over recent months. Regular readers may remember that around three years ago, I prepared a draft family history for my mum’s family. I gave this to her for her 90th birthday. At the time I knew what I had produced wasn’t particularly well-written, but didn’t have sufficient time or information to do a better job. My mum found the long list of citations/references rather daunting; the pedigree chart was a much better way for her to access details of the family and see the connections between various individuals. What she saw, however, did prompt her to share some stories with me.

Fast forward a couple of years and I found myself burdened with a sense of guilt that I’d done nothing on my paternal ancestry for quite a few years. This was where my genealogy journey started in 1987 when my dad passed away. At that time, there was no internet (hard to believe isn’t it), no digitised records, and sites such as Ancestry and FindmyPast were still in the brains of their respective creators. Those with UK ancestry will well remember trawling through microfilm or microfiche of the St Catherine’s House (now GRO) indexes to find the elusive birth, death or marriage registration post July 1837. We would then send off our money to the UK and wait with anticipation for the arrival of the relevant certificates, hoping against hope that we’d ordered the correct ones. The IGI (now part of FamilySearch) was the go-to source for baptisms, burials and marriages prior to civil registration. As far as census records were concerned, if we were lucky a local family history society had produced a census name book or, yet again, we trawled through the original census files on microfilm. There was actually something to be said for searching in this way – it was slower, but we did take the time to look at the records in depth.

Anyway, back to writing the family story. Before starting to write up what I knew about my dad’s ancestry, I reviewed all the information that I had recorded in my family history program. Cryptic references to records found on the IGI weren’t very helpful and may not have been accurate. Everything had to be checked, preferably by accessing original records. The current GRO pilot scheme offering pdf copies of birth and death certificates at a reduced cost of £6 was a welcome boon as I gathered better evidence for my ancestry.

I continued to research at the same time as I wrote. I incorporated the few articles that I’d previously written and sought out further information on topics such as the places from where my dad and his ancestors originated; I plotted addresses on maps of the time to understand migration patterns and to work out how one ancestor could have met and married someone from a different family. I also looked at the spread of the coalmining industry and the conditions in which coalminers worked to get a better sense of the lives they lived. I originally thought I’d write up the family history by individual family; however, as the writing and research process continued, a different structure unfolded. This may change again in the future as more information comes to light, but I definitely don’t want a chronological report. What I do want is something that is accessible to a small, but wide, range of readers.

On an earlier visit to my mum I had used my Flip-Pal scanner to copy all the family photos that she had. I ended up with lots of photos of my dad from his Royal Navy days in WW2, a few of him as a boy, and even fewer of him as an adult. My family weren’t great ones for taking photos, except on special occasions such as weddings, so family photos are few and far between. I wanted to put these into context together with some stories from my mum, as well as my own memories of course. I had printed out a pedigree chart from Legacy showing my dad’s ancestry and this proved really useful in keeping track of which ancestors I wanted to research in more depth. The following image will give you an idea of my dad’s ancestry – it printed out over 14xA4 pages which I stuck together to make a working document!

Chapter 1 of my draft at this stage comprises my dad’s story from his childhood, education, working life, RN service, marriage and family life, his hobbies. I have included photos, research into the area where he lived, industries such as coalmining and brewing. Maps and, where I can find them, photos of the houses where he lived. He lived in the same area for the whole of his life, apart from his RN service, so many of the houses still exist. His main hobby was pigeon-racing and I even have a photo of the shed which sat the bottom of our garden. I have newspaper announcements of when his pigeons won and a great newspaper photo of him with his pigeon-racing buddies at an end of year function at the local pub.

Chapter 2 covers his parents; chapter 3 his grandparents; chapter 4 covers all the greats as I don’t yet have much information about them. Each chapter contains a similar range of material as in the first one as I try and weave the basic information into a story.

As I continued writing and researching, ideas came into my head about topics I could include in my mum’s story and also my own. I’m thinking that my grandson might find this of interest later in his life. Some tentative chapters for my own story include: Early days; Education and schooling; Oxford Spires; London life; Romantic ups and downs; Married life; The migrant experience; Motherhood; Working life; Passions, pleasures and obsessions; Travel; On being a grandmother; What comes next! I keep a journal where I jot down memories that I might like to include in the story.

We’ve covered the topic of writing your own story at GSQ’s Writing Group on several occasions. There are various texts that provide a range of strategies to help people get their stories down on paper. Now that some members are actively writing up their own story, the issue of structure has emerged. No-one wants to write a strictly chronological record, but how best to pull the disparate parts of your life into a coherent whole. 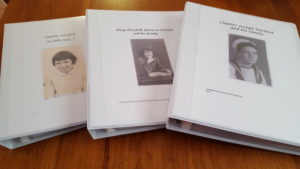 As far as my writing endeavours are concerned, I now have 3 x A4 binders with a photo of the primary person on the cover: me, my mum and my dad. I’ll continue to revise and update these stories and when I eventually feel that I’ve done enough, I’ll have the relevant volume copied and bound so I can share with my family.

All our stories are individual – so it’s not a case of ‘one size fits all’. However, we can all learn from what others have done. An autobiography or life story is an opportunity for you to document your life as you would like it to be remembered, so I’d welcome any comments/suggestions from others who have already written, or are planning to write, either their life stories or a family history. What has worked for you, what did you wish you had done differently? By the time you read this post, I will be on the fourth and final day of the 2018 Congress in Sydney, so I’m also hoping to pick up some ideas there.

Just a quick addendum. I’ve learned heaps of Congress. All I now need is time!