↓
GSQ Blog→family pictures→The simplest of photos can be the catalyst for great things.

Document and preserve the stories and the memories.
By Victoria MacGregor.

The sharing of an old family photograph, and a personal memory, isn’t a popularity contest, or a “what-ya think” moment. The sharing shouldn’t be attributed to the number of likes, hearts or thumbs up collected. Leave all that admiration and back slapping to social media and the showcasing of random current event images. 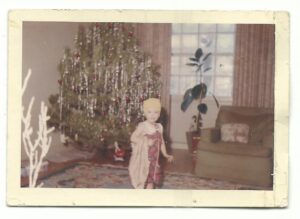 1961 Christmas. I clearly was born in the wrong hemisphere. Authors personal collection

Sharing an old family photograph, can and should be the starting point for a walk down your family’s memory lane. And if you’re lucky, it will lead to surprise disclosures, and stories forgotten, passed down to one relative and maybe not to another. Add in personal perception and the story variations are numerous.

This simple little image from the early 1960’s shows a child, who just happens to be me, standing in front of a well decorated Christmas tree. She’s wearing a bathing suit several sizes too large, a bathing cap, and holding a beach towel (which most likely is a bath towel substituting as a beach towel).

By the simple fact that there’s a Christmas tree present in the photograph, and there’s icy cold frosting on the inside of the windows, we can assume it’s most likely December. Considering I lived in Montreal Canada at the time, I am definitely, without a doubt, inappropriately dressed.

The story could start and end with the little girl in the swimsuit at Christmas time. It’s certainly funny, terribly cute and over the years has given me great storytelling opportunities. You see, I moved to Australia as an adult. The punchline for the story has always been, “I was born in the wrong hemisphere.”

Therefore, the storytelling opportunity doesn’t end in front of the Christmas tree. There are other things in the background, in plain sight, of the photograph that became the larger, more timeless story after I shared it privately, away from social media, with my extended family. In fact, it opened a massive memory dialogue about a few related events and family items. 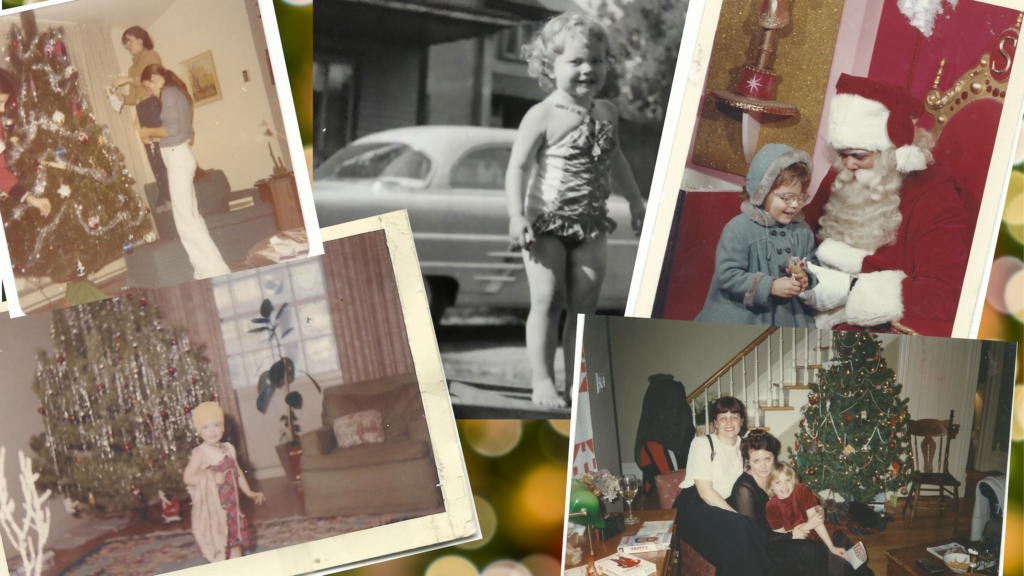 The swimsuit was the spark that lit the memory flame. Authors personal collection.

This isn’t the first time the swimsuit had been captured on camera for generations to come. When I shared the “wrong hemisphere” image with my sister, she immediately responded by leaving a comment and providing another picture. In fact, two. Which of course I responded to.

It was the suit that caught her attention. Reminded her to go and open her little treasure chest. You see, she had other photographs that also had stories to tell, stories that were there in the memories of my family.

Sometimes what happens, and this most definitely has happened for me on more than one occasion, the sharing of a photograph can open up a dialogue between family members who may not have any other reason to communicate with each other, except for a photograph.

Like many families these days, decades may have passed since cousins or siblings were together at the same time. But a photo, any photo can start the storytelling, story sharing process. And what gets learned while sharing is priceless and worth saving. The pattern is always the same, share the image, collect the stories.

Those fun photographs from our childhoods can be a hoot, but an old photograph, a vintage or heirloom photograph of a long gone relative, can reveal or discount a story that had been passed down for a few generations.

As was the case with my great grandfather John Joseph Helme. I’ve written about John Joseph in the blog previously and how his marriage to my great grandmother is a bit of a mystery. Something that is still very much a topic of speculation between family members.

It was believed that John Joseph had owned a tobacco shop in Hamilton, Ontario Canada during the 1920s and early 1930s. We were told that he was the shop owner. It was certain.

A mystery is revealed.

But the shopkeeper story got debunked by one of those vintage photographs that we all have. The photograph was shared with me, and I experienced an “ah-ha, wait a minute” moment.

This simple low-quality photograph uncovers the story of the tobacco shop and the owner’s true identity. Hobson was the family name of John Joseph’s son-in-law Ernest. Hobson’s sold magazines, candies, ice cream and of course tobacco. Great grandfather John Joseph seems to have not owned the shop at all, in fact he worked there for his son-in-law and daughter.

The answer to the question as to why my family believed, or mores the point, were told that he owned the tobacco store himself, unfortunately has died with those who would have known. John Joseph passed away in 1933. The Canadian census of 1931 is set to be released next year in 2023. Not that long to wait. I suspect what might be disclosed on that census will be that John Joseph actually lived at the store and was not living with my great grandmother.  For now, though, the story of discovered secrets is the only story we have.

This photo is now privately shared with my family, there is a small chance that someone will come forward with further details that may help uncover something that will lead to more of an understanding of my great grandfather’s rather mysterious life.

When precious photos get shared, the games begin.

Once this starts, the walk down memory lane, the guessing game, the storytelling will follow. Comments like, “I remember that” or “I didn’t know that”, will come flooding in. Things will go quiet at times. People have lives that take them away from the circle of storytelling. Then, out of the blue someone pops in with a fresh comment, an ancestry addition or fact, a story or perhaps even they share another fresh never before seen photograph that will start the process again.

It’s a bit like perpetual motion, or should I say perpetual storytelling. It keeps coming, one photograph, or as often is the case, one document at a time.