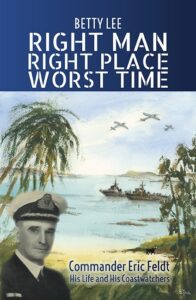 “Lastly, and most of all, thanks are due to my wife who coddled me back to sufficient health, in spite of my rebellious self, to undertake the task of authorship, and then put up with me while I wrote.”

This last sentence in the Author’s Acknowledgments from The Coast Watchers, Eric Feldt’s 1946 book, gives but a tiny glimpse of the importance of Nancy Feldt in the life of her remarkable husband.

In recent years I have sought better recognition by Australian history for the part played by my Great Uncle Commander Eric Feldt and his team of loyal followers The Coastwatchers in the Pacific in WW2. This led me to write Eric’s biography.

I now feel that in concentrating on gaining knowledge about Eric, I rather neglected his wife Nancy, known to her family and Eric as Nan, and I hope to rectify this a little. Unfortunately for me I never met either of them. They had no children, so there are no direct descendants to tell their story.

Nancy Lynette Echlin was born in Queensland on 11 July 1897 to Captain Richard Boyd Echlin and Maude Letitia White. Her father had served in the Boer War.

Nancy became a journalist with the Brisbane Courier reporting on the social events of the city. When Eric and Nancy first met is not known. It may have been when he was back in Brisbane on leave from New Guinea in 1929. Another possibility is that they met through family connections. Eric’s sister Ada, my grandmother, and Nancy’s sister Gladys were both nurses who had worked at the Brisbane General Hospital.  Prior to Eric and Nancy’s wedding the Brisbane Courier reported that their staff gave Nancy a farewell party on 9 December 1932 and presented her with a canteen of silver cutlery and an inscribed silver sandwich dish. The article said that she had endeared herself to all with whom she had worked for seven years and would be greatly missed. 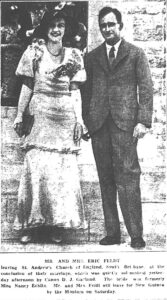 Wedding report of the marriage of Eric Feldt and Nancy Echlin. Picture from Brisbane Courier 11 Jan 1933 accessed at State Library of Q’ld.

Eric and Nancy married at South Brisbane on 10 January 1933 and after a few days honeymoon at the Gold Coast sailed on the Montoro to Madang for Eric to take up his appointment as District Officer.  Nancy’s life there would have been in sharp contrast to her life in Brisbane. However compared to her Mother-in-law, Nan could hardly complain about her change in life situation. Eric’s mother Augusta Blixt, known as Gussie, had travelled from Sweden to Australia half a century earlier as a single lass of 21 years of age to marry Peter Feldt, a man eight years her senior, whom she had not seen for four years.

In her early years in New Guinea Nancy sent correspondence to The Telegraph Brisbane. On 7 Dec 1933 a photograph of their home in Madang was published as By a Tropic Lagoon. Letters followed the next year – 30 July 1934 ‘’They Live in Luxury” Women on the New Guinea Goldfields New Guinea life Described; 5 Nov 1934 Tins, Tins and yet more Tins Housekeeping in New Guinea Life on an Outstation  Manipulating a Tinned Menu ; 24 Dec 1934 Festive Season in New Guinea  “Christmas Belong God” How Natives Regard Season  Plum Pudding and Mangrove Oysters.

While apparently enjoying her life in Madang, Nancy seemed rather envious of the lives led by the women in the town of Wau on the goldfield. Eric’s appointment as Warden of Wau Goldfield in1935 must have must have been pleasing for her. With the coming of war and Eric’s re-enlisting in 1939, her idyllic life came to an end. In 1940 she joined Eric who was stationed in in Port Moresby where he was the instigator and leader of the Coastwatchers. When the Coastwatchers Headquarters moved to Townsville in June 1941 Eric and Nan relocated there. 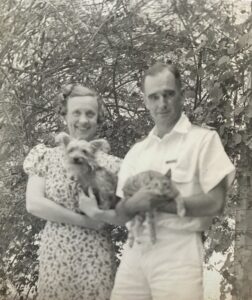 Eric and Nancy Feldt in Port Moresby in 1940 with ‘Pickles’ the dog and ‘Hector’ the cat. Alison Early, Feldt family photos

Nancy appears to have thrown herself into war work. Perhaps her previous occupation led to her activities making the social pages of Queensland newspapers. On 2 November 1941 the Sunday Mail  Brisbane reported that Mrs Eric Feldt now living in Townsville  ….. has quite settled into her flat and is busy with war work. She qualified in camouflage netting during a recent stay in Brisbane and her time is fully occupied with this, Canteen and Red Cross. Her camouflage netting activity is again mentioned in The Telegraph on 21 Nov 1942 and the Townsville Daily Bulletin 12 Dec 1942.

What a worrying time it must have been for Nancy when the stress, strain and long hard hours working as the head of the Coastwatchers resulted in Eric having a heart attack on 20 March 1943.  His being admitted to the naval hospital in Tulagi, seemingly so far away in the Solomon Islands, would have added to her concern and distress. The National Archives of Australia hold a copy of Nancy’s letter to the Director of Naval Intelligence, Commander Rupert Long written on 1 April 1943. I have difficulty in reading her handwriting but can see that she confesses to being one worried woman and that the waiting and anxiety is rather (?)horrible. She also says Eric has been giving out everything mentally and physically since September 1939. I have been very worried about him for some time … …(?)….go on without something snapping. However, I am very proud of him and the fact of you saying he has done a “really magnificent job” and I would not have had it otherwise. He was actually admitting to me how tired he was just before this trip. 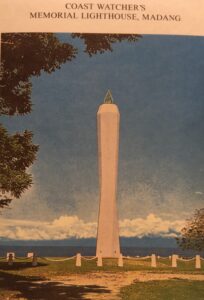 How relieved Nancy must have been when Eric was flown home to Brisbane a month later. He arrived on 18 April in Catalina flying boat arranged at General Macarthur’s request.  Eric spent another seven weeks in hospital in Brisbane. From then on Nancy was his main care giver. She must have excelled at this for not only was he able to write his book, but he also survived for another 25 years. His health had been permanently affected and he was unable to work, but Nancy was able to manage on the pension they received.

After Eric’s death in 1968 Nancy was given the honour of naming a Navy patrol boat. She chose the name Madang which held so much meaning for her. Madang was the place she came to as a new bride and had lived with Eric in the early years of their marriage. It was where she and Eric returned in 1959 for the official opening of the majestic Coastwatchers Memorial Lighthouse. It was where, from aboard the HMAS Samarai in May 1968, she watched as Eric’s ashes were piped on board and then scattered into the Pacific Ocean near the Coastwatchers Memorial Lighthouse. In August that year she was given the further honour of launching HMAS Madang. In recognition of this she was presented with a replica of the ship’s bell with a plaque marking the event. 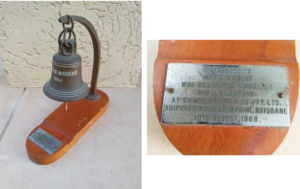 Replica of the ship’s bell of HMAS Madang with a plaque marking the event presented to Nancy Feldt in August 1968. Copyright: Alison Early, Feldt family photos

Nancy lived for 17 years after Eric’s death. First, this was in the unit they had occupied together in New Farm overlooking the Brisbane River and New Farm Park with its beautiful rose gardens. Her later years were spent in an aged care home in New Farm where she died on 23 August 1985. In 1976 she donated Eric’s medals to the Royal Historical Society of Queensland. Eric was indeed fortunate to have found someone like Nancy to share his life with, however they were lucky to have found each other.