May 1919 is the 100 year anniversary of “Spanish Flu” hitting Brisbane then spreading throughout Queensland. “Spanish Flu” does not come from Spain but was first majorly publicised there as Spain was a neutral country in WW1 and the press was not censored so it acquired that name and it has stuck. It had been a long four years of war. The influenza pandemic of 1918-1919 killed more people than did World War I, at somewhere between 40 and 100 million people. Most of its victims were healthy young adults, in contrast to most influenza outbreaks which predominantly affect the young and the elderly, or otherwise weakened immune-system patients. Most deaths from this pandemic were primarily in those aged 15-35, with 99% of deaths in those under 65. It has been cited as the most devastating epidemic in recorded world history. More people died of influenza in a single year than in four years of the Black Death bubonic plague from 1347 to 1351.

The pneumonic influenza had first hit down south after having been kept initially at bay by Commonwealth quarantine but in January 1919 the first case was officially notified from New South Wales of a soldier who had come up by train to Sydney from Melbourne (Victoria notified of cases the day after New South Wales).

On 29 January, Queensland declared pneumonic influenza an infectious disease, within the meaning of the Health Act, and introduced the pneumonic influenza regulations. This meant that all local authorities had to notify the Queensland Government of any cases of pneumonic influenza. The authorised medical practitioners would diagnose and notify the government of cases. The regulations gave particular powers to the doctors of being able to force a patient into isolation at home or in hospital. They also were given the authority to detain someone if they were at risk of influenza, and forcibly treat them by a ten-minute session in an inhalation chamber on three consecutive days and by inoculation with an anti-influenza vaccine.

The closure of the border left many Queenslanders stranded in New South Wales. Tents were set up in Tenterfield which was where the railway did the changeover. (Queensland railway was a different gauge track to New South Wales). Initially a tent city was established at Tenterfield showgrounds. However with 450 people there and another 150 expected Tenterfield only agreed to this for a short time then the camp was set up at Wallangarra with another set up at Coolangatta (8 February). People had to apply to the Government to be allowed back to Queensland. There is a listing of the people who went through the Wallangarra Quarantine Station at the Queensland State Archives. 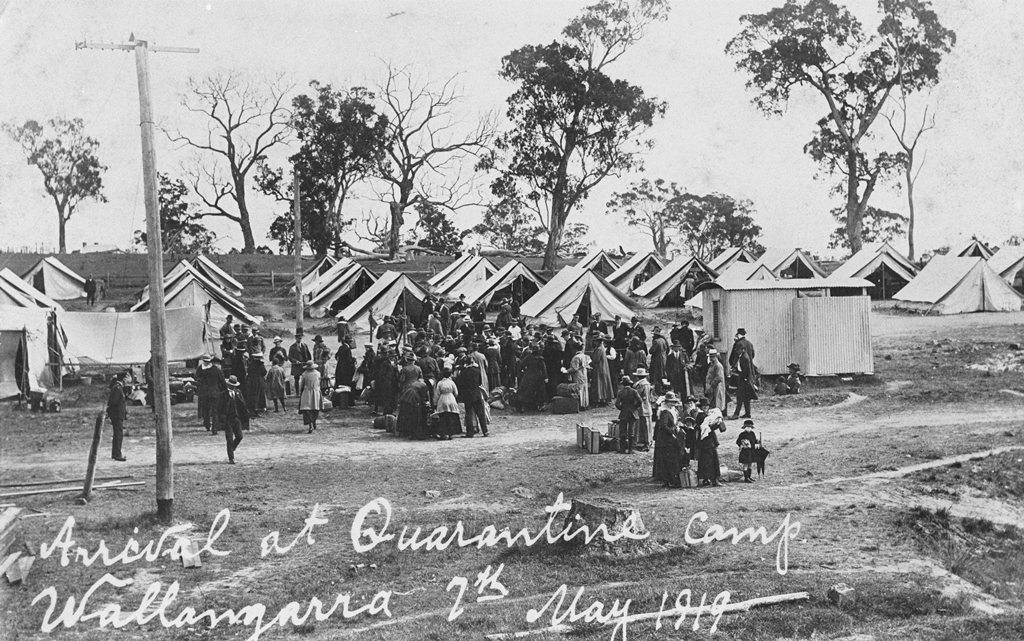 The closure of the border left many Queenslanders stranded in New South Wales. Tents were set up in Tenterfield which was where the railway did the changeover. (Queensland railway was a different gauge track to New South Wales). Initially a tent city was established at Tenterfield showgrounds. However, with 450 people there and another 150 expected Tenterfield only agreed to this for a short time then the camp was set up at Wallangarra with another set up at Coolangatta (8 February). People had to apply to the Government to be allowed back to Queensland.

The government decided they would also charge a daily fee of seven shillings six pence a day (reduced to half that amount for children aged 2-12, while children under two were not charged). Each person had to sign a form agreeing to this. They were given three months to pay the fee. There are files at Queensland State Archives (QSA) regarding the money recovery efforts. 5321 people had spent time in the quarantine camps, with 3715 of them at Wallangarra. By 25th April Queensland people were still clear of infection but there had been 19000 cases in Victoria.

Queensland held off the incursion of disease from the south until May by closing their borders and enforcing quarantine at the border.  Ships were quarantined at Lytton and there were a number of deaths prior to May from infected ships.

Finally, on 2 May, the Acting Premier Edward Theodore announced there were cases of influenza at the Brisbane General Hospital.

Everyone in the community was affected by the new regulations that came into force on the 9th May:

Notice of the new regulations had been released and almost straight away the Boxing Stadium in Brisbane announced it would be removing its roof to allow for continued activities!

The number of cases in Brisbane rose quickly and from 7th – 15th May there were 1100 cases notified and 462 patients in hospital. By 27 May, 4452 cases of influenza had been notified within the metropolitan region. The Health Department provided information leaflets and SOS emergency cards which had SOS on one side and Food on the other. When households required help, they placed the SOS cards in a window showing the appropriate side. These were distributed in each area. In Toowong they were distributed by the senior male students of Toowong State School over the whole area within two days.

Where a member of a family was infected, the house was isolated and quarantine rules were applied. Only the most serious went to hospital. It was the local community efforts that helped feed and nurse people. The ambulance service could not cope, and it was not uncommon for patients to be transported by private vehicle. The Red Cross Women’s Emergency Corps, which had worked hard throughout the war years, swung back into action. The Toowong branch started operations at Dr Helen Shaw’s residence. They provided beef tea, barley water, and other food for people suffering from influenza. With so many men away the bulk of the work fell upon the women and the general community.

So many people were ill that services such as gas and transport were rationed.  The influenza spread rapidly throughout Queensland. Our Indigenous communities were particularly hard hit and Thursday Island and the Torres Strait Islands were hit early in 1920.

Matthew Wengert has recently published a book of research called City in Masks, funded by Brisbane City Council (Lord Mayor’s Helen Taylor History Research Award) of how the influenza outbreak affected Brisbane. I recommend the book to get a feel of how your ancestor was affected during this difficult time. ISBN: 9780648068730. Publication Date: 09-Feb-2019.