↓
GSQ Blog→Photos→The story behind a photograph

I really don’t care if they’re not my family, I just love the look of them – the clothes, buildings, styles and most of all, the stories behind them.

Some years ago, I managed to locate the descendants of my great grandfather’s half sister, Ephrath (Effie) Paulovich, and visited them at the family property at Widgee near Gympie. I had thought that this would be a day for chatting about family and finding out more about Ephrath who married John Fitzgerald in 1880. But, it proved to be much, much more than that. I was shown a suitcase full of old photos, some known to the family but many unknown. I ended up spending the day scanning as many photos as I could, while taking part in the non-stop conversation, lunch and cups of tea and coffee.

One of the photographs, taken by Albert Lomer of Queen St, Brisbane, caught my eye. It was of a young attractive woman with an intelligence and calmness about her. Written on the back in pen was the word Fannie with the year 1875. Underneath that, written in a ball point pen was Mrs Clark. 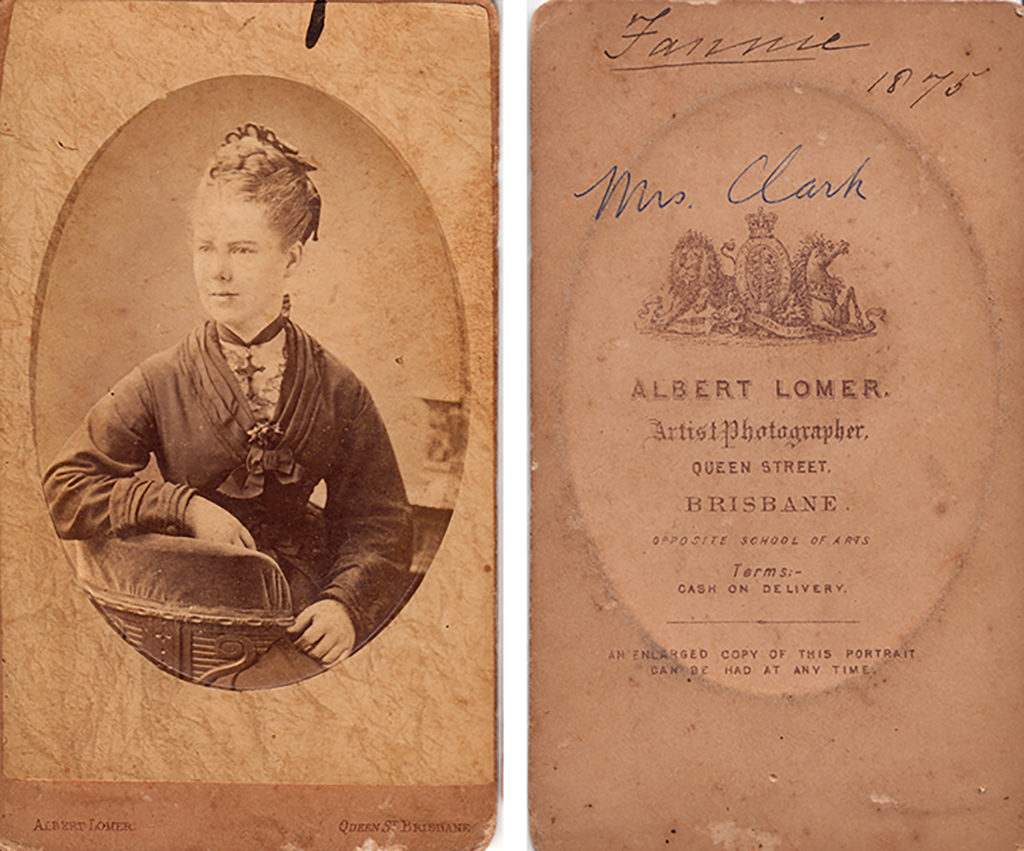 The photo intrigued me because the Fitzgerald descendants knew that Ephraph and Fannie Clarke had been enduring friends and that Ephrath’s eldest daughter, Kathleen, often stayed with the Clarke family in Brisbane when she travelled down from Gympie. So I began to research the family not knowing that I would find that Fannie Dondaldson was related to two of Queensland’s earliest creative identities – James Brunton Stephens and Joseph Augustine Clarke. But I also learnt so much more – about the Queensland Immigration Scheme, places and streets in South Brisbane in the mid 19th century and the teaching careers of young women at this time.

In the mid to late 1860s and up until 1876 when her mother died, Ephrath Paulovich, my great great aunt, lived in South Brisbane. Her father owned a store on the corner of Stanley and Russell Streets, opposite the Royal Mail Hotel, while her mother ran boarding houses. The first house, which Mary Anne operated between about 1870 and 1873, was Riverview House, “a large and commodious residence, adjoining the Old Corporation Ferry”.  This property was followed by Acton House (now the Ship Inn Hotel) in Sidon Street, from late 1873 until early 1876.

So, who was Fannie and what was her story?

Fannie was born Frances Catherine Donaldson in 1855 in Archerstown, Clonmellon, County Westmeath, Ireland.  She was the daughter of Thomas Donaldson and Bettina/Barbara Shaffgotsche (with numerous variations). Barbara was the daughter of Count Franz (Francis) Josef Schaffgotsch and Rosalie Piers while Thomas was the son of Richard Donaldson and Maria O’Reilly, landholders in the counties of Westmeath and Meath. 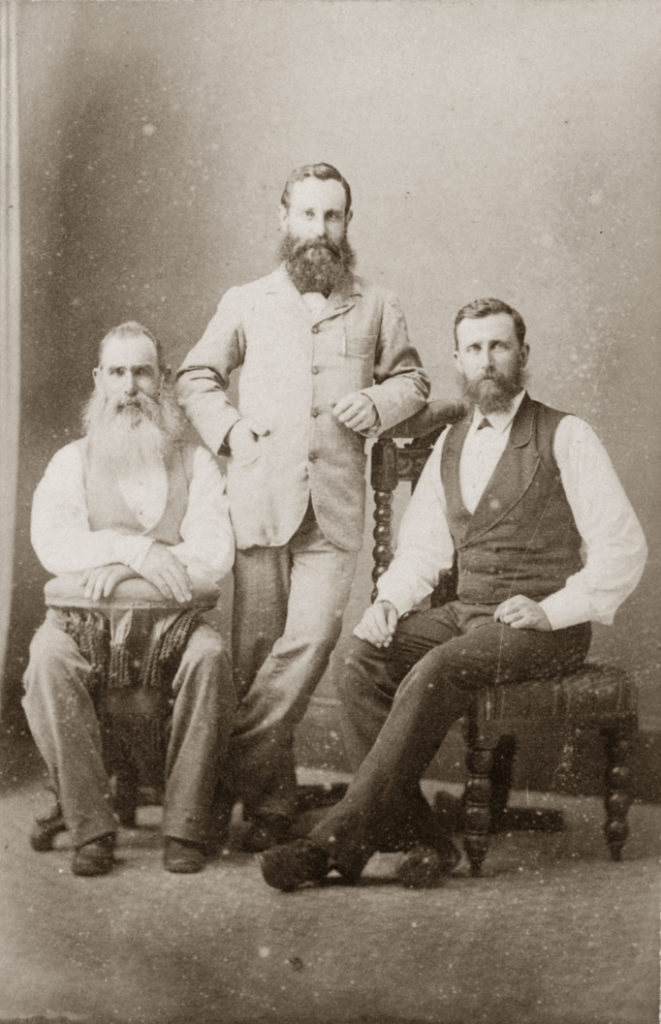 In 1865, the Donaldson family left Ireland on the Sunda and arrived in Brisbane on the 23 May. Many of those on board the Sunda had been brought to Australia under the auspices of the Queensland Immigration Scheme, established by the Catholic Bishop of Queensland, Dr Quinn. With Thomas and Barbara Donaldson were their six children: Rosalie, Maria, Frances, William, Frederick and Robert. Also travelling on board the Sunda was Father Dunne, the main architect of the scheme. It is not known where the family lived on arrival but by 1866, it was well settled in Hope Street in South Brisbane.

In that same year, Maria Donaldson of the 5th class at the Normal School received 4th prize for grammar, geography and general merit.  All of the Donaldson girls, and Ephrah Paulovich, attended the Normal School which was on the corner of Adelaide and Edward Streets (demolished in 1927). In 1862, the school became a training school for teachers. This may have been how Frances and Ephrath became friends. In fact, all three of the Donaldson girls became teachers. 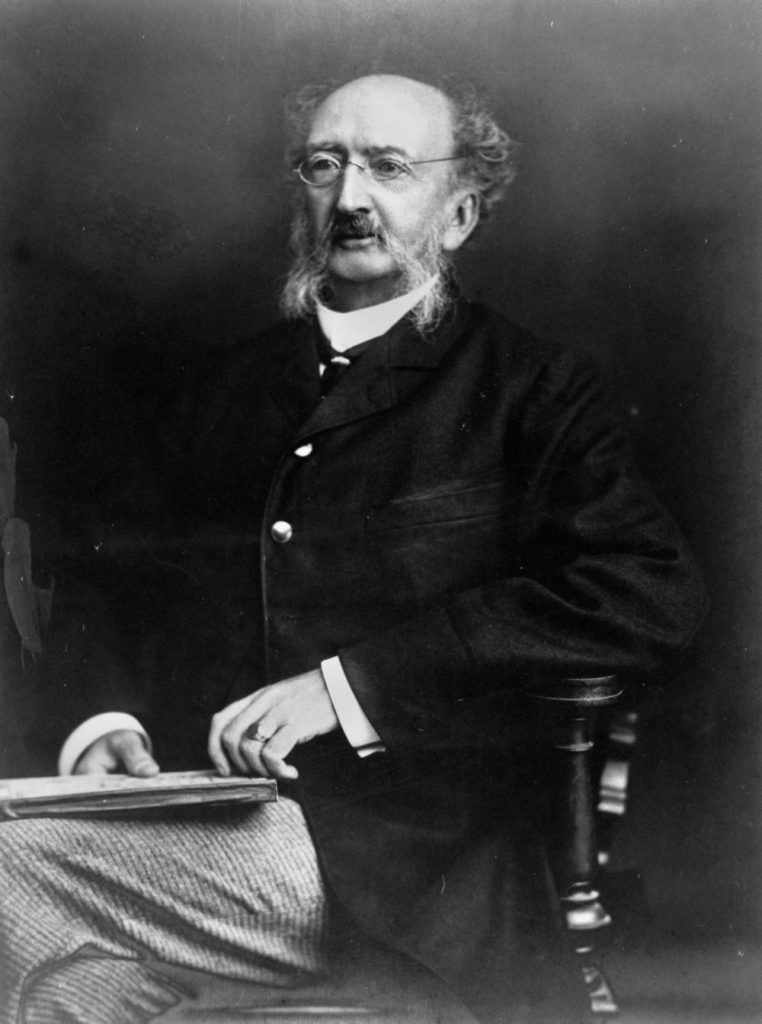 Rosalie was admitted into the teaching service on the 01 May 1868 and was assigned the role of Work Mistress (essentially the sewing teacher). She was paid a salary of £80 and ‘performed her duties efficiently’. She resigned on the 27 October, 1876 on account of her forthcoming marriage to James Brunton Stephens.  Rosalie is likely to have met James at the Normal School as he was a teacher there for a short period of time. James died in 1902 and at the time of his death, had been regarded as one of the greatest of Australia’s poets. 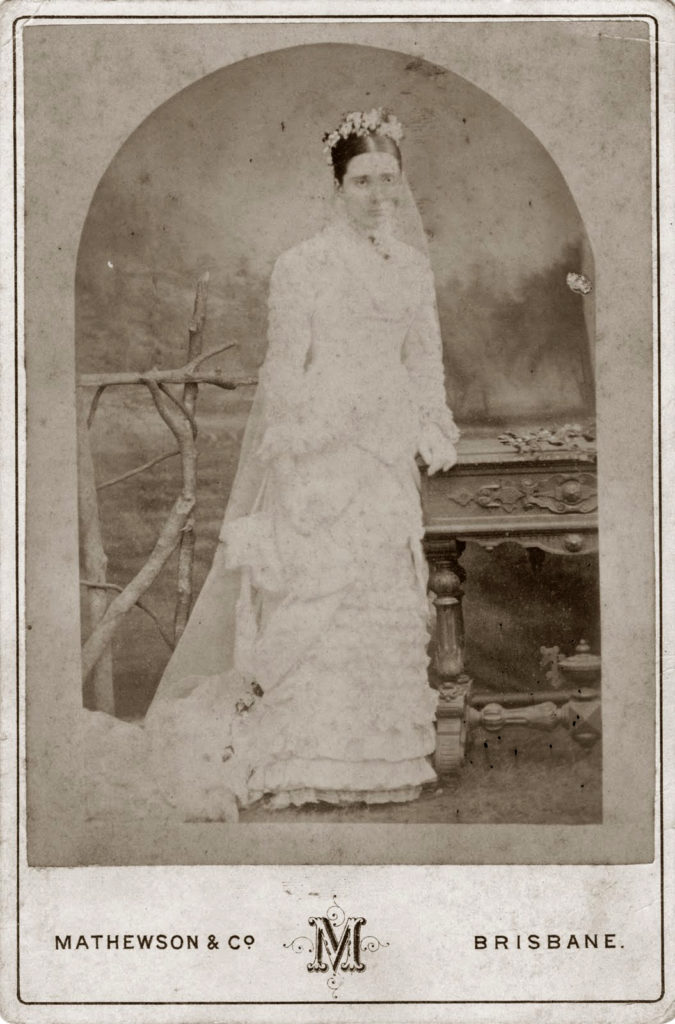 Rosalie or Maria Donaldson, Courtesy of the Donaldson family

Maria Donaldson, the second daughter, was listed as a teacher at the Normal School and South Brisbane between 1869 and 1873, resigning on the occasion of her marriage.  Maria married Joseph Augustine Clarke on the 8 January, 1873. Joseph was at least ten years older than Maria and had arrived in Brisbane in 1865. According to his obituary, he had been associated with the Bombay School of Art, before coming to Australia. In Brisbane he was employed as a drawing master by the Board of Education. The collaboration with his future brother-in-law, James Brunton Stephens, began early with a lecture given in June of 1866 by James B Stephens on the Ruins of Thebes (which he had viewed), with the subject illustrated by Mr Joseph A Clarke. In September of that year, they again collaborated on a manuscript entitled Punch in Queensland. Both were involved in fundraising for St Stephen’s Cathedral in 1871, with Stephens contributing a book of poems for sale and Clarke an illustration, for the anthology, of the western façade of the Cathedral.

Joseph Augustine Clarke was a painter, illustrator, etcher and arts teacher, and is considered to be one of the key figures behind the establishment of what is now the Queensland College of Art. He painted the famous 1880 oil painting Panorama of Brisbane from Bowen Terrace and regularly drew illustrations for the front cover of The Queenslander.

Sadly, at the age of 29 in 1882, Maria died leaving three young children. Her death may have been as a result of complications following the birth of a son Hubert, two weeks previously. Hubert only survived for a day.

Three years later, Fannie Donaldson married her brother-in-law, Joseph Augustine Clarke on the 28 December, 1885.  Fannie and Joseph had two daughters, Mary Egbertha (Bertha) born in 1887 and Frances (Madeline) born in 1889.  Joseph Clarke died in 1890 leaving Fannie with five young children under the age of 16 to raise – her own and those of her sister.

Fannie lived at the family home, Rangeview, in Norfolk Road, South Brisbane for the next twenty or so years with her social outings and those of her daughters and nieces often mentioned in newspapers. Fannie’s mother, Barbara, lived with her and the children until her death in 1898.

The Fitzgerald family, especially Ephrath and Kathleen, were regular visitors. Kathleen Fitzgerald kept diaries and entries over the years confirm that the friendship between Fannie and Effie had remained constant since their time together as young women in South Brisbane. For example, in the 1909 August school holidays, Kathleen and Ephrath travelled to Brisbane to stay with the Clarkes at Norfolk Road. While there, they visited the theatre, the races at Ascot, Flavelle’s gems, the Show (Ekka) and Eschenhagen’s Café and the Art Gallery. When Kathleen married Fred Walker on April 25th, 1914 in St Stephen’s Cathedral, the wedding breakfast was held at Mrs Clarke’s residence at Norfolk Road. 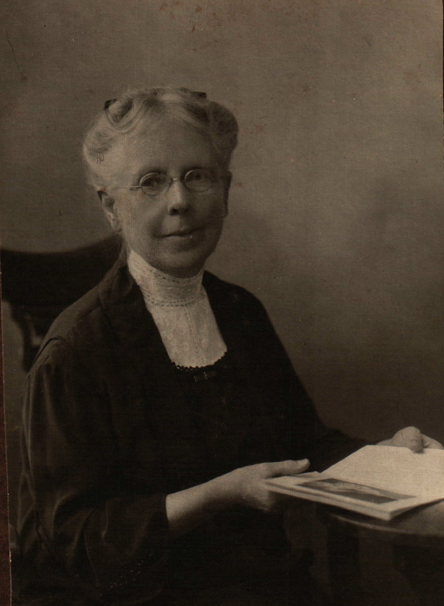 Fannie in later life – around the 1920s, Courtesy of the Dray family

By 1928 Fannie was living in Sidney House, River Road (now Coronation Drive) at Toowong. (Sidney House stood on the site of the ABC studios prior to their move to Southbank and was operating as a boarding house at this time.) She moved to Sydney around 1932 and lived in Darlinghurst with her daughters as Madeline was now a concert manager for the ABC, while Bertha was taking groups on tours to Japan.

An image of a young woman yielded so much information – more than can be put into a single blog post. Does it matter that this isn’t my family?  Not in the least, because I learnt so much about the Donaldsons, their related families and landed estates in Ireland (there is another blog post just on that aspect) and perhaps most importantly, I found out about an enduring friendship, one that continued between these two women for over fifty years.