↓
GSQ Blog→naming variations→So What’s in a name? Name variants and do they really matter?

As a genealogist by trade, I can’t tell you how many times I’ve had clients tell me something similar to this:

And to be fair, they all truly believed it – they were quite unaware of the ever-annoying variants of surnames when tracing back through the generations; phonetic spelling is a term that many today have never heard of in regard to surnames.

So then, do these variants really matter in the long term?  I mean, does a name really define us?  A surname that is.  We know forenames can often have more meaning than a surname; they might be a traditional family name, given to a child in honour of a grandparent, great grandparent, father, mother or even aunt, uncle or very close friend.  A forename can also be given because of the significant meaning it has to the “namer” – especially today’s new generation of couples who are naming their children after celebrities, movie characters, or even odd characteristics and terms that give that particular name a comical (sometimes idiotic in my opinion) connotation.  But what about surnames?  Do they hold as much meaning to us – even after all the variants over the years and the recording of these sometimes radically different spellings on official documents and precious family heirlooms?  Do they really mean something to us?  I hear some of your cry out “YES!” – while others, perhaps, are not too sure.

As genealogists we LOVE surnames – correct?  They hold a special place in our hearts and in the branches of our trees – but do they define us?  Does a surname declare who we are?  Does it speak to others about our character?  Some would say no, not as it might have in the past, when you would hear whispered on the wind “He’s a McDonald…” or “She’s Hugh Rowland’s daughter – you know, the convict Rowland” – these whispers alluding to a certain type of “character” or “infamy”.  Indeed, one might still hear comments such as these, yet they are now relegated to the school carpark or the dreaded Facebook list of comments (yet aren’t as polite!).

I would like to give you another perspective about a surname, and relay to you a story that opened my eyes to the way a surname can define us – a story where the misspelling of a family surname mis-defined a family for more than three generations.

I began tracing the Scateni line in 2017 – it was one of the four main lines of a client from Canberra.  I knew almost immediately that this line would be out of my scope of expertise, and so I quickly wanted to ascertain where the line was from before commissioning an expert overseas.  The only information I had was a name – Giovanni Scateni.  Well I was pretty confident this was an Italian name, yet when I did some preliminary searches, I found a detailed tree on Ancestry that listed Giovanni’s surname as Scattini.  Further to this, it implied that the Scattini family line came from an area known as Ticino – an area I knew well after doing a recent project with a Ticinise branch called Cavazzi.

But little did I know the way this Scateni sage would unfold.  The following in an excerpt from my research report:

Research into the Scateni family line began with the knowledge that this branch of the family was from Italy.  For many years the descendants of Giovanni Scateni, who emigrated to Australia in 1877, were of the belief that his line stemmed from the northern part of Italy and the southern-most part of Switzerland.  The area where these two countries meet, along the border country of Switzerland, is called Ticino.  It’s close to the Italian towns of Ronago and Bizzarone and Italy’s northern most city; Como.  The main reason for their belief was because the surname of Scateni – in its proper spelling of “Scattini” – has its origins in this unique area. 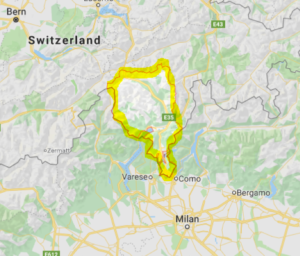 Quite quickly however, it became evident that Giovanni was born in the city of Pisa, in the Tuscany region of Italy – quite a distance from Ticino and Como. Of course, this did not rule out him having northern Italian roots – yet it did necessitate further investigation into the beliefs that had long been held by his descendants in Australia.  In doing so, we soon discovered that the surname of Scateni was almost unknown in the region of Tuscany; however, the surname Scatena was very popular.  After uncovering this fact, our Italian colleague was quite quickly able to find the baptism record for Giovanni Scatena with parent’s names that matched those given by Giovanni on Australian documents.  Following this incredible discovery about the surname and the true origins of Giovanni’s ancestors – we knew that the Scateni name had been incorrectly spelled through the most recent generations, and more importantly, it had no connection at all to the Scattini families of Northern Italy or Southern Switzerland. 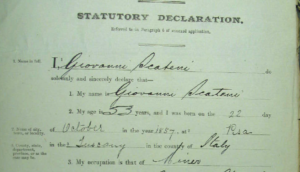 Wow!  I still remember making a phone call to a lady who had believed all her life that she was from the Scattinis in Northern Italy.  Further to this – and something quite incredibly – many of the family had actually changed their name officially to the spelling of Scattini to reflect what they believed were their true origins!  In fact, still today, this is seen in the very well-known legal firm that carries the Scattini name (yes this is the family!).  After my revelations to them, one of the young men from the family in northern Queensland stated that his uncles and other family now wanted to change it back!  They even wanted to go as far as changing the names on some of the gravestones of their family.

So, the answer is a big YES!  Surnames can and do define us.  Instead of a family having close ties to the terribly oppressed Ticinise from southern Switzerland and Northern Italy – they are, instead, undeniably Tuscan, and can forever be defined as such.