What do Dame Nellie Melba and the Boer War have in common? I would have thought very little until I started researching the story of one of my relatives, Marmaduke Alexander Thomas (Duke) Bell. The name Marmaduke seems very quaint and unusual but as it was passed down for a few generations in my father’s family, it has become quite helpful in doing family research.

I commenced researching Duke Bell because I knew he had gone to the Boer War and knowing very little about that war, I thought uncovering his story would allow me to find out not only about him but also about the Queensland contingents that went to fight in the Boer War.

Duke’s grandfather, Thomas Bell, came from Ireland to NSW with his family in 1832 where he had government jobs until 1844 when he took out a licence on a large tract of land on the Darling Downs. Duke’s father, John Alexander Bell was about five years old when they arrived in NSW and, after living on the Darling Downs for some years, he went to England and on 3 November 1864 he married Frances Georgina Armstrong in Sussex, England.[1] They came to Queensland for the birth of their second child, Georgina, born on 28 September 1866 at Waterstown, Ipswich and a year later Duke was born on 10 October 1867.[2]  They returned to Ireland when the children were young, probably to the Birr area in County Offaly where Duke’s mother’s family lived.

Duke joined the 3rd Battalion of the Leinster Regiment, stationed at Birr, as a Lieutenant on 31 January 1885.[3]   But he returned to Queensland in 1890 to look into the the family company which was in bad shape owing to the drought, depression and bad management. He wrote to his mother from Isis Downs near Isisford that he had heard from Charlie Armstrong (her brother) who had left Ireland and come to work in Queensland.[4]

Charlie Armstrong was in fact Nellie Melba’s estranged husband. Nellie Melba’s father had moved his family to Mackay after his wife’s death in 1881. Melba must have met Charles Armstrong soon after they arrived in Mackay because they married in December 1882 and on 16 October 1883 she gave birth to a son, George.  But it was not a happy marriage and Nellie left Charles in January 1884 and returned to Melbourne. At the time of Duke’s letter, Charles Armstrong’s address was in Mackay.

Duke went on to manage Westland Station near Winton from where he wrote telling his mother about Connie Scott & myself. She is as you doubtless know De Lacy’s wife’s sister & the most popular girl in Brisbane as well as I may add the nicest & (strictly between you & I mother darling) we have both fallen head over heels in love with each other.[5]   Duke married Constance on 17 February 1897 and in May 1899 Duke wrote to his sister from Merivale Station near Roma where he was an Inspector of Stations,  congratulating her on her engagement I sincerely wish, dear old girl, you will be as happy in your choice as I have been, more than that I cannot possibly wish for you.[6]

Tragically, on 24 August 1899 Constance died after giving birth on 22 August 1899 to a daughter, Constance Bell. It appears from her death certificate that she had uterine cancer and that the shock of the birth killed her.[7] Duke’s father, John Bell, who had come to Queensland and was also living at Merivale Station explained to his wife that he …could not speak [Duke] looked so darn crest fallen. His little daughter baby is fat …. and will live I hope to be a solace and comfort to her widowed father… It is painful to look at Duke. He feels his loss very much.[8]

Eight months later, Duke decided to go to the Second Boer War and was appointed as a commissioned officer in the 4th Queensland Imperial Bushman Contingent which were mounted troops.[9]   Six Queensland Defence Force contingents went to the the Second Boer War (1899-1902) and fought for the British Empire against the Orange Free State and South African Republic (Transvaal).

Duke’s father was left in dire circumstances at Merivale Station and he wrote to his wife Believe me I think of him and feel his absence from the colony more than I can express.[10]  Duke left his daughter with his wife’s sister, Florence De Lacy Moffatt, who had been widowed. His little baby died on 10 October 1900 at Maroon, Boonah with the cause of death cerebral congestion, diarrhoea and exhaustion after an illness of six days. Duke’s father died a year later in August 1901 and both were buried in the Moffat family grave in Ipswich.

A journalist from the Queensland Times visited the 4th Contingent in April 1900, as they trained at Fort Lytton, where Marmaduke was a …newly arrived commissioned officer in camp. The Contingent

…were being exercised in various evolutions on the fine “veldt,” just below the Reformatory “Kopje.” …indulged in ball practise at targets erected on the mud flats and at a later period, their lines were inspected. …On Saturday evening the first “sing-song” by the “bushies” was held…Judging by the varied nature of the programme, the fourth contingent possesses plenty of first class talent…[There were] 395 (including six captains, 10 lieutenants, eight non-commissioned officers, and five buglers) and 567 horses (including 427 riding, 110 transport, and 30 privately- owned animals).[11]

The 4th Contingent left for South Africa on the SS Manchester Port on 18 May 1900. 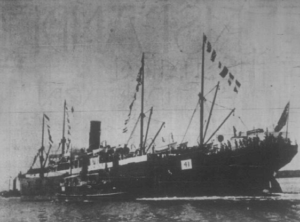 They arrived at Cape Town on 22 June 1900 and travelled for six days on the train to Kronstadt in the Orange Free State. After assisting in protecting the railway there they were ordered to go to Pretoria, north of Johannesburg. They were based around this area taking part in battles in the east, west and central Transvaal until the Transvaal eventually surrendered on 31 May 1902 and the Second Boer War ended.

During Duke’s first year in South Africa, his military record  shows that he received 5 shillings a day with the balance paid into the account of Mrs De Lacy Moffatt.  After serving with the 4th Contingent, he was attached to the Army Services Corps and then on 7 July 1901 he was transferred to the 5th Contingent as a captain; the 4th Contingent left South Africa on 21 June 1901. He also commenced to receive his full pay almost a year after his daughter had died.[12]

Duke was promoted from Captain to Major in May 1902 and appointed as the director of stock for South Africa. He acted as the Government representative on the committee appointed to sell the Government stock (taken from the conquered Boers) to the Imperial Cold Storage Company. He (Duke) estimated that

…the number of cattle captured as a result of the recent combined military drive around Harrismith was not less than 25,000 head. Of these he sold 13,600 head to the Cold Storage Company, and had to draft every one of them. The transport secured 5000 splendid bullocks, and the different columns took away about 3000 more. In addition to the cattle, 25,000 shecp were also sold, and the Remount Department obtained 1500 horses of various degrees of utility.[13]

In October 1902 the Queensland Figaro reported that it was Rumored that Mr. Marmaduke Bell has received an important Imperial appointment in South Africa in connection with cavalry remounts.[14] The Army Remount Service was responsible for the purchase and training of horses as remounts for the British Army between 1887 and 1942.

Duke married Ellen Lucie Margaret Saunders (nee White) a divorcee at St George’s Presbyterian Church, Noord Street, Johannesburg on 10 October 1905.[15] She had a number of children and the marriage was not happy. It appears Duke returned to Australia and in May 1912, he was staying with Nellie Melba (his aunt by marriage) at Coombe Cottage near Melbourne where he wrote to his sister Sally.

Many thanks for your letter forwarded to me here… Nell sends her love and will see you in Dublin in September or October when she will be singing. It is quite on the cards that I may come home after all as I have made up my mind at last and could stand it no longer and have left Lucy. There will no doubt be … scandal but that cannot be helped – suffice to say I have offered her all I have in the world and asked her to divorce me … Nellie has been kindness itself…I hope to see you soon again now – my great regret will be not having gone home last April[16] or March- however like everything else in this world, regrets are useless and what might have been counts for nothing.[17] 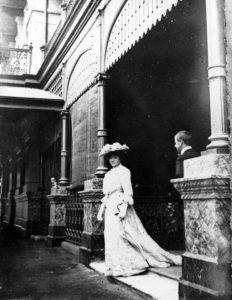 There are other family letters written by Duke and Nellie Melba which indicate that they were romantically involved and in fact marriage was mentioned. But Melba had second thoughts and by the time she went to England she had made it clear that the romance was over.

Duke also made his way to England via Canada and then joined the 11th Battalion of the Worcestershire Regiment in October 1914.[18] I have not been able to find a First World War record for him but as he would have been 47 when the war commenced he may not have seen active service. He married Elsie Maude Wilkinson or Stevens in 1919 in Kensington, London[19], lived in various parts of London and then on 29 January 1955 he died in Paddington, London.[20]