Driving into Gympie along Brisbane Road, you cross over Pengelly’s Bridge. This bridge with its predecessors makes for a fascinating tale.

When I was nine my family moved to a property of four acres, bordered on two sides by Deep Creek, and then fronted the main road which went over Pengelly’s bridge as it is now. However, on the north-eastern corner of the property bordered by Deep Creek were the remains of previous bridges. This was always a fascination for me.On the left of the photo in the water, there remains a log, which possibly is the remains of the original bridge[1]. 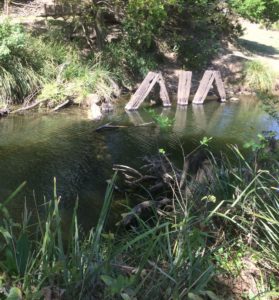 Are these the remains of Queensland’s first toll bridge?

This first bridge was built by Mr J. F Pengelly, possibly in 1868. Remember gold was discovered in Gympie in 1867. Therefore it was necessary to have a bridge over one of the water courses to transport the gold out. The bridge was built by felling two trees across the stream, and laying a corduroy decking of logs. Crossing it in a wheeled vehicle was a bone racking experience.

Now Mr Pengelly was an enterprising man as he charged a toll to cross the bridge.

Though the bridge provided a useful community service, collecting the toll was not a popular way to make a living (things haven’t changed!) and the time came when an irate miner met the demand for toll by throwing an axe at Pengelly’s head. Pengelly ducked, received the axe handle across his back and fell flat on his face. The miner thinking he was dead, ran for his life and was never seen in Gympie again.

Later that year on 31 October 1868, a letter appeared in the Gympie Times and Mary River Mining Gazette[2], written by Mr Pengelly, in which he stated complaints had been made of the tolls charged, although he had had authority to do it. He stated also that he had sold the bridge to the Government and that the tolls were now abolished.

As this bridge was so low and Gympie had many floods it was necessary to build a bridge that was higher. The previous photo shows the remaining timber structure which may have been the foundation for the second bridge.This photo shows the remains of what may have been the third bridge somewhat higher than the water. However in 1870 the flood height had been 21.61 metres so this third bridge would have been nowhere to be seen. Consequently the third bridge also was unusable during floods.We see here in this photo, that this structure had been built on the bank. 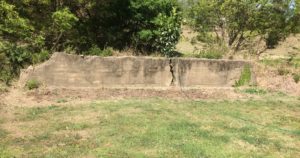 In 1887 a letter in the Gympie Times and Mary River Mining Gazette[3] stated, “The very great necessity for a high level bridge over Deep Creek will be admitted by all who have witnessed the many times all the bridges over the creek (there were three) have been submerged during the past three months; and no one can tell how often the same thing may happen, it would be wise to build a bridge at once.”

An elderly citizen of Gympie stated, “There were many robbers in the area as they used to hide under the old Pengelly’s Bridge, which was washed away many times in the floods.”

It was not until 1931 before a high bridge was built[4]. Unfortunately even this high bridge did not cope with many of the floods in recent years as can be seen from this photo taken in 1974. 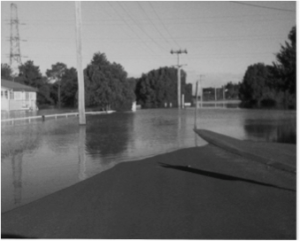 Pengelly’s Bridge nowhere to be seen in the 1974 floods

In researching these bridges, which originally crossed on to our family property, and the ensuing road which crossed diagonally across our property, I have found some interesting facts.

It had quite a few names: Pioneer Bridge, Deep Creek Bridge, One Mile Bridge, and the new one finally was named after Mr Pengelly. The most interesting fact was that it may have been the first toll bridge in Queensland. I also found that once it was owned by the Government, Cobb and Co. coaches crossed it. Those coaches not only carried passengers, but had cargo of gold.

If I was still a child I could imagine all sorts of wonderful tales of bushrangers and robbers lurking in our paddock waiting for those coaches!!!!

What a tale to tell!

And my tale is not ended there. After the Government bought the first bridge from Mr Pengelly, a new road was built from Brisbane to Gympie, before that it was only a mailman’s track. Now on this new road in January 1869, just south of Gympie two bushrangers, George Palmer and William Bond held up a Cobb and Co coach just south of Gympie on this new road. I wonder if they had been camping under the bridge!!!!!