↓
GSQ Blog→Beazley→Treasures in the Trove 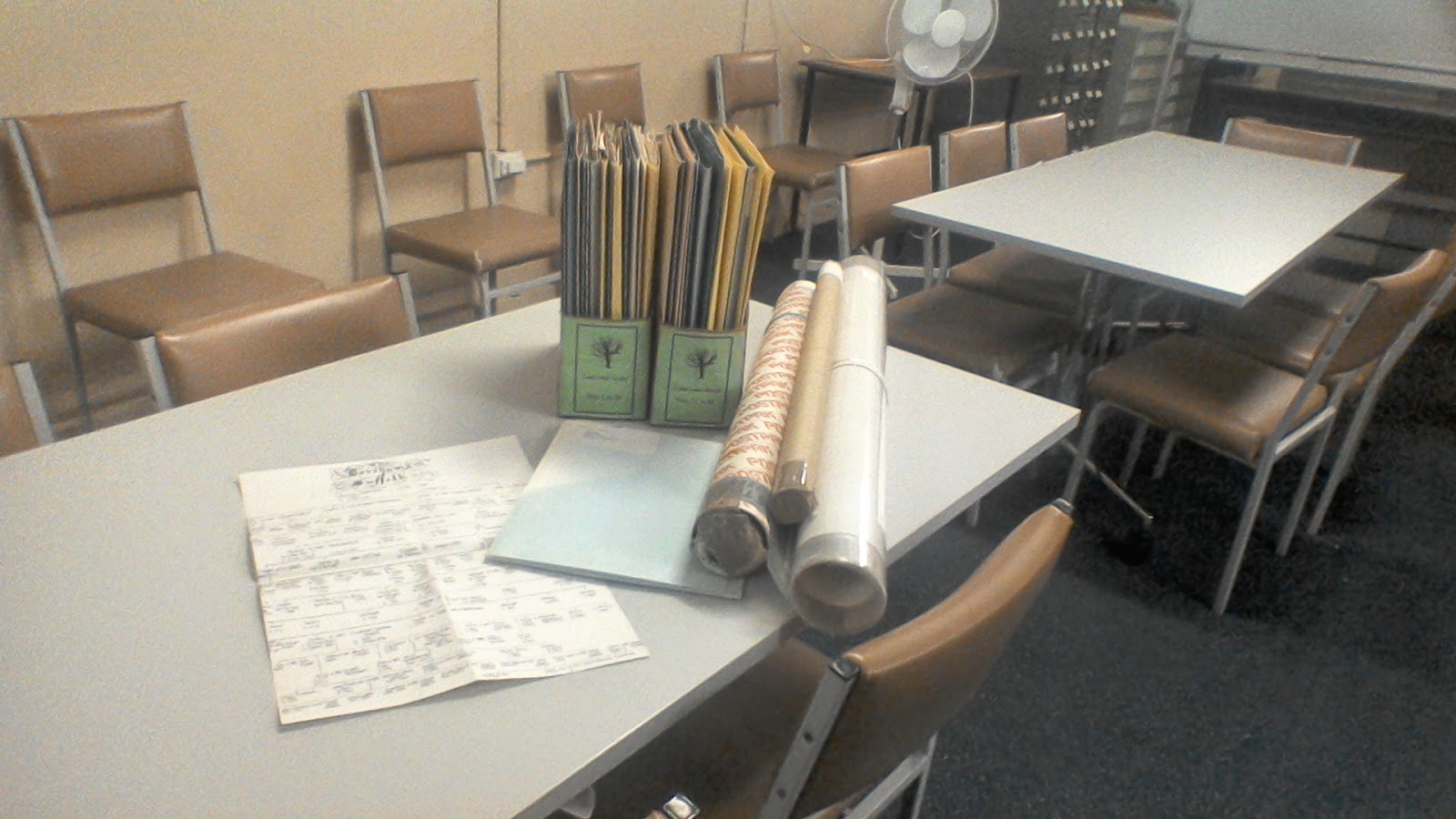 The cardboard box smelled musty, the colours had faded on the cylinders it contained and the packaging tape holding the contents in place was brittle and brown.  As I unrolled each scroll, the old paper yellowing and crisp to touch, I began to take in the exquisite detail on each family chart.  The writing, typeset, or by hand with extravagant loops and flourishes, added to the sense of ‘old worldliness’ I was experiencing.  Crests and Coats of Arms, displaying shields, animals, birds and mottos, added pictorial element to this unfolding mystery.

Watson.  Behrendorff.  Pidgeon.  Kable.  Names caught my eye and I started to wonder about the stories that might lie behind each individual, each family.

What had been discovered, or, more accurately rediscovered, was a box of family tree charts given to GSQ and, over time, the box had been hidden away in a corner.  Yes, this even happens to genealogical societies!  But what a treasure trove!  The detail on each chart, some less than A4 in size and some, as I unrolled them, stretching meters across the top of our microfiche cabinets, was tremendous.  More than simple names and dates, on some charts were written short stories and one included photographs, an absolute gem for those with connections to these particular ancestors.  So, when I was asked to be a part of GSQ’s blogging team, my first thought was to share these incredibly detailed, delightfully quirky, beautifully illustrated family trees with the online genealogical community.
Thomas Boreham, born circa 1525 and died 2 January 1608, married his wife Joan circa 1550.  Thomas and Joan head up The Borehams of Suffolk, chart number one in GSQ’s Family Tree Chart series.  Covering fifteen generations, the last entry crept over onto the back of the chart, with birth dates in the early 1970s.
What struck me immediately about this hand drawn tree, apart from the uniform printing and precise alignment of each branch, was the repetition of first names through multiple generations.  Consider having to keep all those generations straight with the name Thomas being passed down successively through eight lots of fathers and sons!  Clearly accurate research was very necessary when preparing this chart, particularly since the Borehams followed the social conventions of the day when losing children in infancy, using the same first name for subsequent children.  Parents of one branch of the family living in the early 1700s, chose to name three of their sons Thomas.  The first of the three died aged four years and the second, born just a year after his namesake sibling died, lived only eight days after he was baptised.  This happens again three generations later when two brothers, born in 1831 and 1833 respectively, are both given the name George.  While no death dates are recorded for either child, it is reasonable to assume that the first George died at a very young age, prior to his younger sibling being given the same name.
Throughout the generations of Borehams there are numbers of Johns and Williams, Margarets, Marys, Sarahs and Elizabeths.  Born 7 December 1576, Thomas and Joan’s granddaughter Barbery grew up to marry Jeffery Brockall.  Who would have guessed that the name Barbery was interchangeable with the name Barbara?  I wonder if it was a childhood nickname that stuck.  If I ever come across a Barbara in my family tree, I will certainly be searching the name Barbery as well! 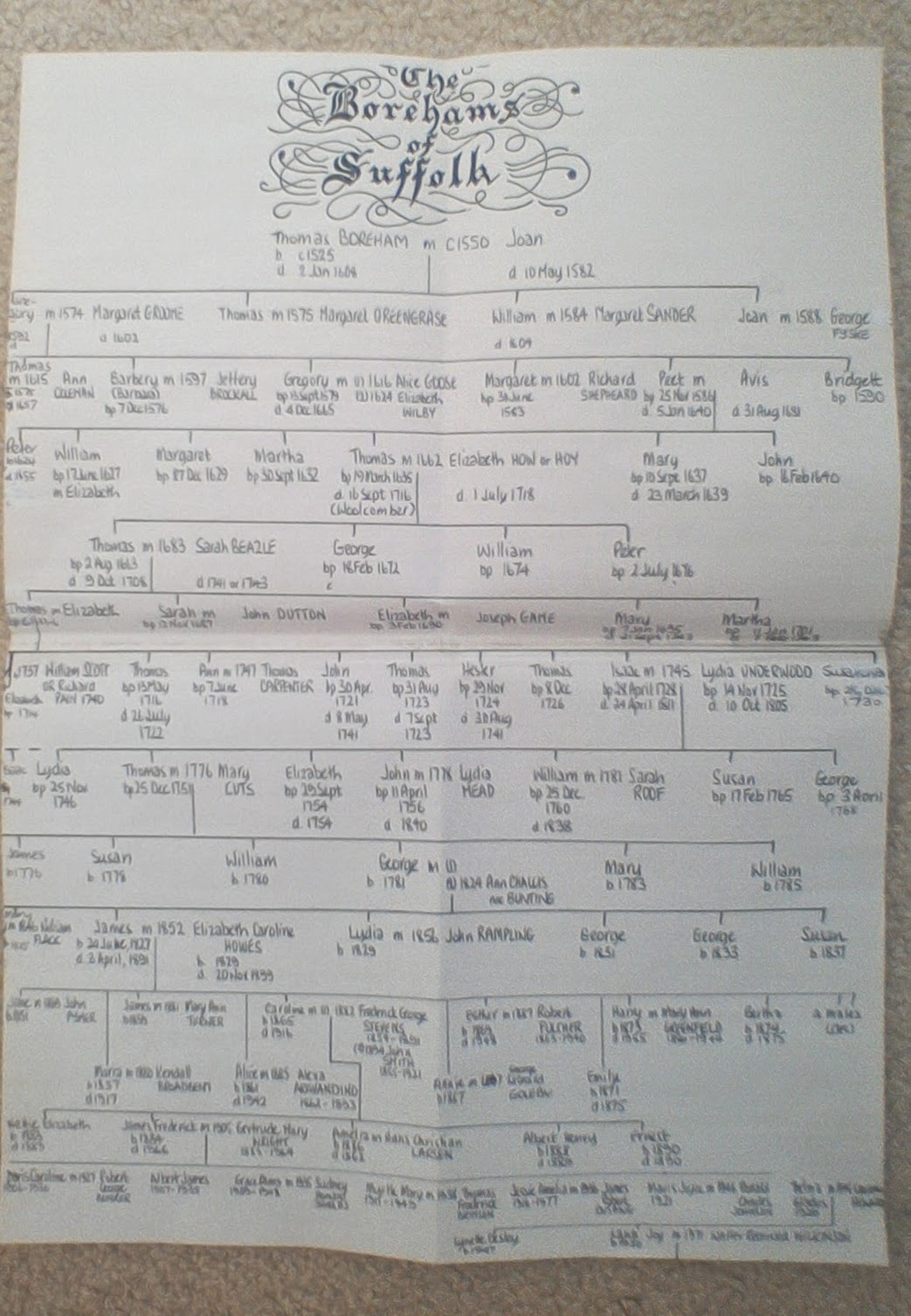 This chart is simple; detailed but simple.  I wonder if the original purpose for compiling it was to keep names and dates straight for the author.  Apart from the flourishes and swirls around the title, the tree itself includes nothing more than this very basic information.  The heading itself is the only indication of location for all fifteen generations.  No places were listed for births, baptisms, marriages or deaths.  Could this mean that the Borehams remained in the same location for centuries?  The surnames of those who married into the family included Groome, Greengrase, Sander, Fyske and Coleman in the 1500s; Beazley, Dutton and Game during the 1600s and in the 1700s Carpenter, Underwood, Cuts and Roof.  How might these in-laws have met their respective partners?  Are there links through local churches, businesses or fraternal organisations?  There is only one occupation mentioned on the chart, that of a Thomas – of course! – born 19 March 1635, married to Elizabeth How/Hoy in 1662, a woolcomber.  What could that one small clue tell us about this dynasty; their economic status, their standing in a community?   Could it provide us with an understanding of the nature of the area in which the Borehams lived; the geography, weather patterns, transport routes and industry?
I did find it interesting to acknowledge just to myself that for hours I poured over this chart of ancestors completely unrelated to me, checking first names, surnames and dates.  Each one of the Peters, Anns and Alices, Susans, Janes and Alberts became more than just names on a page as the questions I posited above flooded my mind.  Should there be any one out there in ‘genealogy land’ that is interested in the Borehams of Suffolk, don’t hesitate to leave a comment on the blog or contact GSQ at info@gsq.org.au  and ask one of our Research Assistants to locate this chart for you.  I’m also happy to announce that the index to GSQ’s Family Tree Charts is now available in searchable format on the Member’s Only Section of the GSQ website.
Join me next month, when I examine the Templeton/Gormley family, chart no 2 in the series, and look for more Treasures in the Trove.  Until then, happy researching and may your brick walls tumble before you!