↓
GSQ Blog→Alington→Treasures in the Trove – February 2015

The two yellowing pages, one A4 and the other the more old fashioned foolscap in size, were joined together by a rusting, metal sewing pin, the rust beginning to mark the back of the larger sheet.  On these pages are two very different looking charts, linking a family through its generations from the 1980s back to 1650.  The more recent tree, compiled in 1981, is handwritten and covers the period from 1980 to 1839.  On the surface, there is nothing remarkable here; first names connected by vertical and horizontal lines indicative of the relationships across and through the generations.  Years of marriages and the first names of spouses, along with the occasional surname of those who married into the Jarvis / DesForges family, give indications of Greco-Italian, English and Scots-Irish heritage. The point of connection between the two charts is Mary Ann DesForges, a four times great granddaughter of Peter and Catherine DesForges.  Born in 1849, Mary Ann married William Jarvis.  It is Mary Ann and William’s descendants that make up the whole of the second tree. 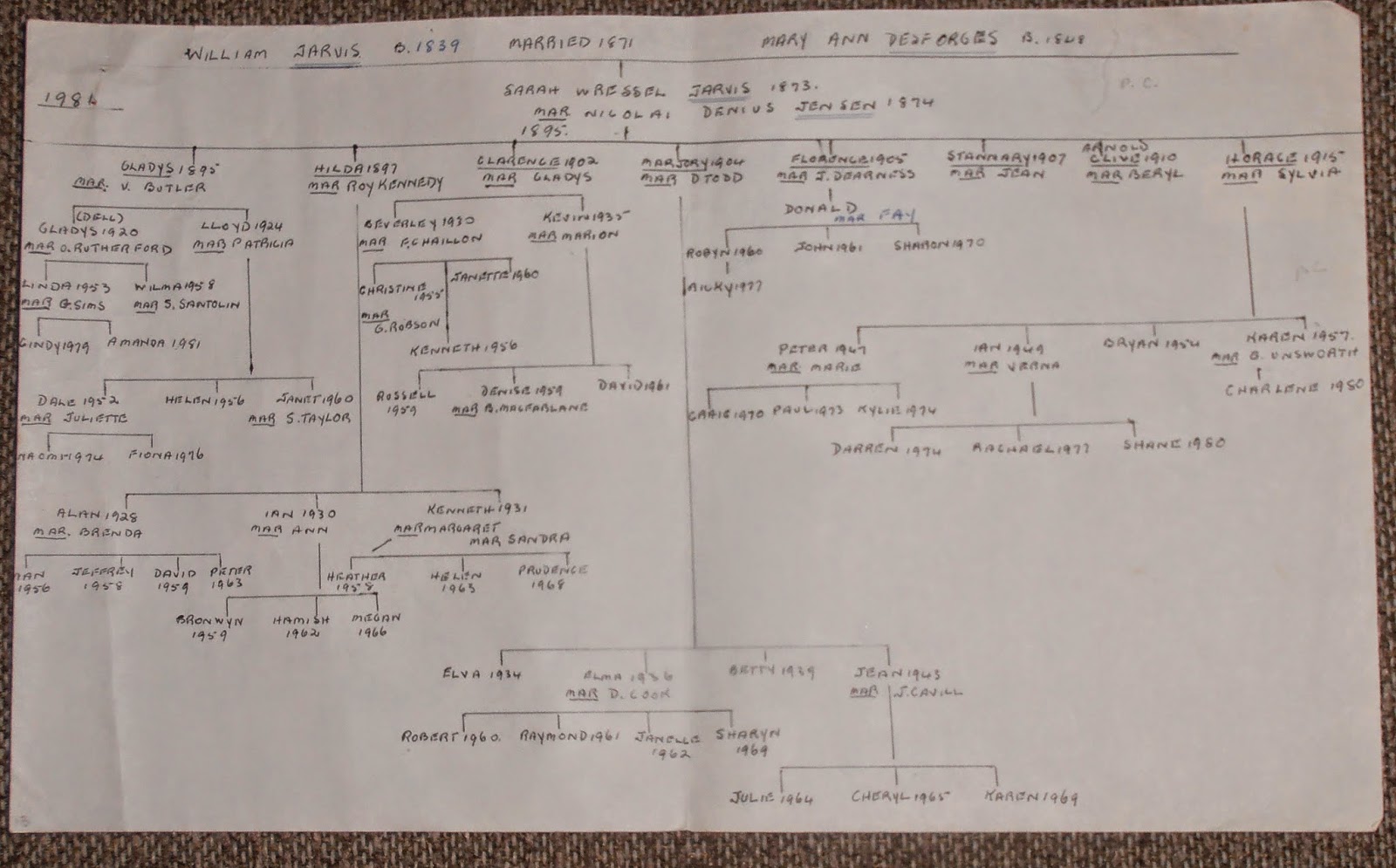 The older tree is also handwritten, with a printed title “The Rev. Peter Desforges. MA”.  Immediately underneath the title is the following paragraph:
French Huguenot born in France 1656 arrived London 1680 ordained Deacon by Bishop of London 1681 and ordained Priest 18 June 1682 nominated by Lord William Alington Constable of Tower of London who thereafter presented him to the living of Tothill Lincolnshire where he was Rector for 43 years.  He married Catherine in 1688 and they had 7 children.  He was Naturalised 5 March 1691 and was buried at Tothill 5 April 1725. 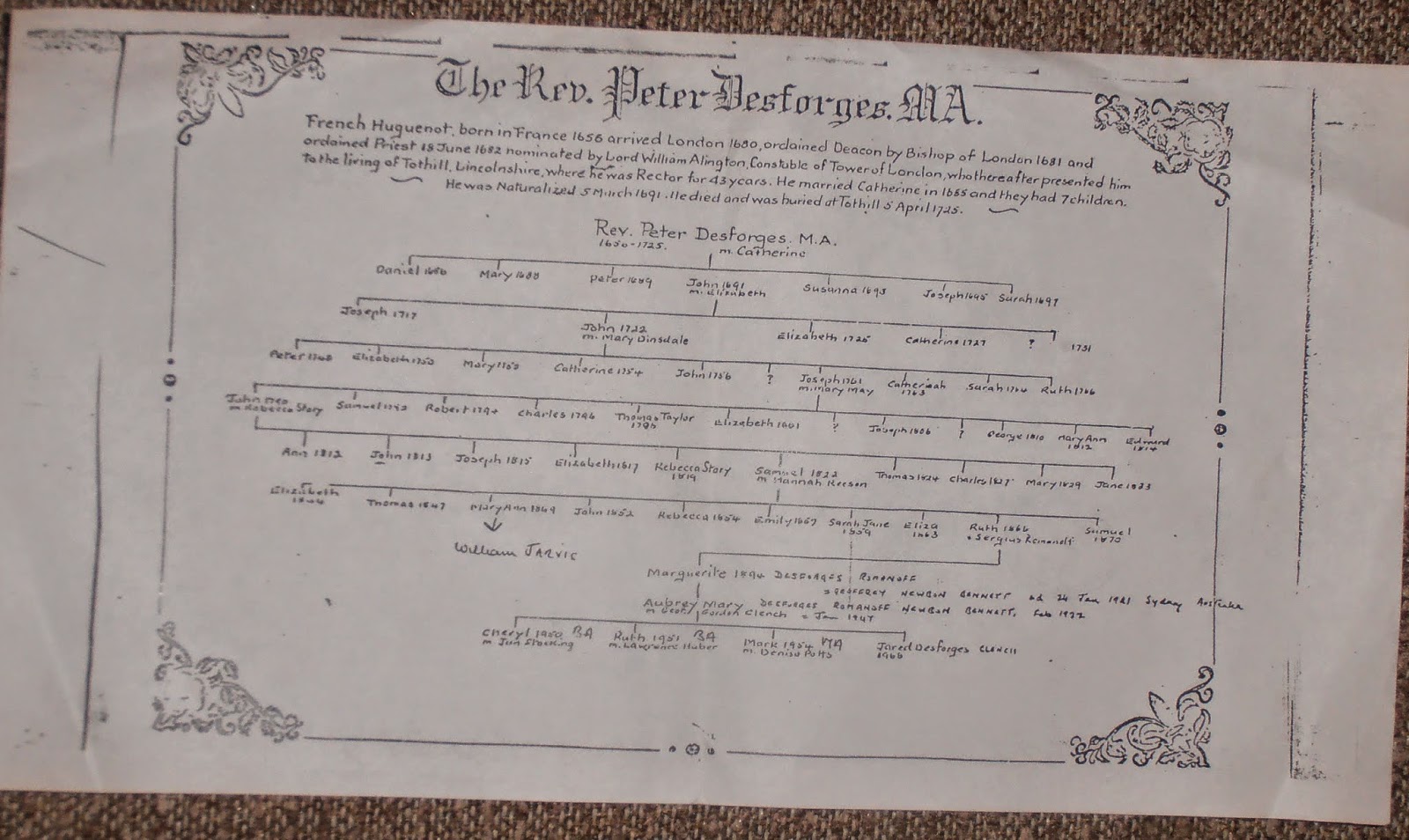 What a wonderful description of an ancestor to find on a family tree; the detail concerning his Christian ministry, date of naturalisation and burial couldn’t but thrill a descendant wanting to know more of their DesForges family.  Focusing on the fact that Peter DesForges was a Huguenot, I was immediately interested to know what further information might be available on the French Protestant refugee community in the late 1600s and the good reverend in particular.  It made sense then to contact the Huguenot Society of Australia.
Their national secretary was very helpful, telling me about The Quarto Series.  These records, published by the Huguenot Society of Great Britain, confirm DesForges’ denization on 5th March 1691.  Other resources documenting this expatriate community are the Proceedings of the Huguenot Society of GreatBritain, but it appears thatthe Reverend is notmentioned in them.  Reading the summary of Peter’s lifeon the family tree chart, it couldreasonably be assumed thatat some point during his life and ministry in England, he mayhave been one of the“Huguenot clergy who just went straight into Anglican benefices”.[1]. That Tothill is a small rural parish andthere was no Huguenot community there, would seem to support this understanding.  Had DesForges done this, he wascertainly not alone.  Robin Gwynn’s “Huguenot Heritage” was published in 2001 by Sussex Academic Pressand is afurther resource helpful for those researching their Huguenot heritage, particularly in order to gain an understanding of the culture of the non- conformist group and their interaction with the Anglican Church.
AsDesForges’ ministryoccurred in England, it alsomade sense to askfor the help of one of GSQ’s most experienced English researchers.  The immediate past facilitator of GSQ’s English/Irish Special Interest Group graciously took time to do some research on the paragraph that appeared on the family tree chart and was able to provide me with some interesting aspects of Reverend DesForges life in England.
The usual genealogical suspects – Google, Ancestry, Wikipedia, FindmyPast, Lincs to the Past and the National Archives – reveal that all the DesForges in the UK are descended from the same man.  There is a biography, and a transcription of Peter’s will from 1723, on www.mocavo.com.  Because there is an indication that Reverend Peter was awarded an MA, the alumni registers for both Oxford and Cambridge, the only 2 universities that existed in the 1600s, were checked, without success. To add further depth to the picture that we see developing here, it was important to search for information about the other characters mentioned in the description of Reverend DesForges’ life.  The Bishop of London in 1681 was Henry Compton, an alumni of Cambridge and Oxford and “…strongly pro-protestant, which is why he may have favoured Peter”[2].  Knowing more about the part Compton played in the “Glorious Revolution”, the period during which William and Mary were placed on the English throne, could give researchers fascinating insight into the times in which Peter, Catherine and their family lived.  There is an Encyclopaedia Britannica entry about Compton http://www.britannica.com/EBchecked/topic/130368/Henry-Compton. Lord William Alington, DesForges’ patron, was 3rd Baron, as well as Constable of Tower of London.  Amusingly, one of the rights held by Alington in his capacity as Constable, was that hecould claim anything that floated in the river in the vicinity of the Tower.
Thanks for support researching this post must go to the Huguenot Society of Australia’s Secretary Robert Nash, the immediate past Secretary of their Queensland Chapter Dawn Montgomery and Pauline Williams, immediate past facilitator of GSQ’s English/Irish Special Interest Group.  Each was generous with their time, giving me guidance as to the resources and information available.  The genealogical community in Australia has at its disposal individuals, organisations and resources of incredible quality.  Your own GSQ has experienced researchers; Special Interest Groups; branches, each with their own focus and distinct sets of records; an Education Program and a social media presence.  Are you making the most of the resources available to you so you can progress your research, maybe beyond what you ever thought possible?
[1] Email from Robert Nash, National Secretary, Huguenot Society of Australia 14/2/2015
[2] Email from Pauline Williams, Immediate Past Convener Genealogical Society of Queensland English/Irish Special Interest Group 8/2/2015