↓
GSQ Blog→Craven→Treasures in the Trove

Their heads were close together and bowed low over the table in front of them, their eyes straining to read the tiny writing on the diagram unfolded before them.  I had placed Family Tree Chart Number 3 on one of the tables in the Society’s library, been distracted by other tasks (classic genealogy!) and my position at the base of the chart had been thoroughly usurped!  Chatting quietly, two of GSQ’s most experienced family historians scanned names, dates, locations and occupations, fingers pointing to specific details that caught their eyes.  “Where did you get this?” I was asked and I explained the Treasure Trove of family tree charts on our shelves that are just waiting to be explored.

The most striking detail on Chart 3 is three simple words: THE FAMILY TREE.  Clear, definitive.  For the two family members who compiled the chart and included their names and contact details centre top, it is obviously THE family tree and it is a credit to them.  Acknowledged as a Historical Study and a work in progress, the chart given to GSQ is the third of three editions created over a ten year period between 1974 and 1984. 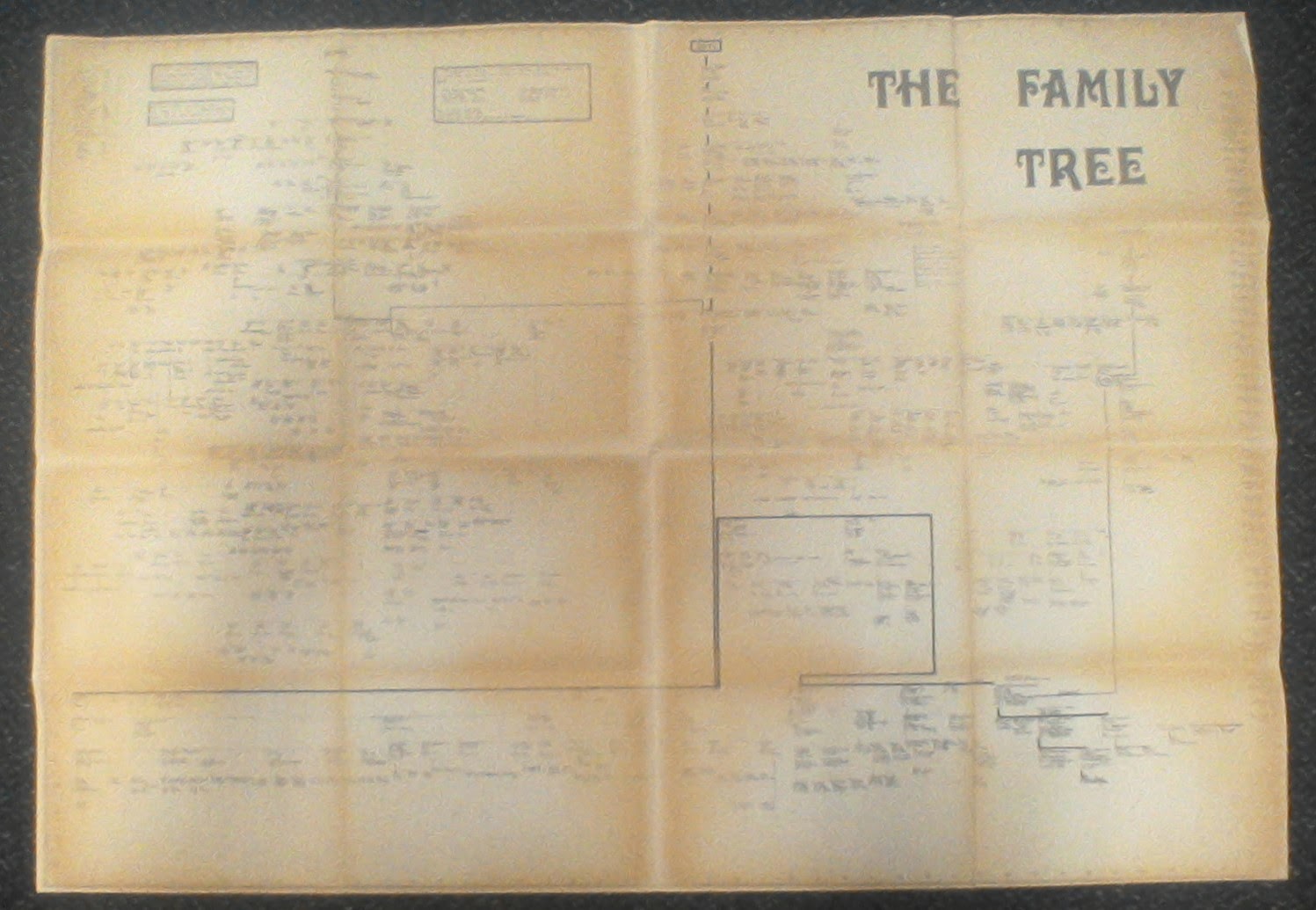 This document is 83cm high and 99cm wide, which has allowed the genealogists who have researched the lineage of the Storte, Date and Craven families, to include significant levels of detail across generations.  Plotting the sections of each family well, they have divided the chart so it is easy to follow the connections between branches and family groupings.  They have included alphanumeric references on the chart’s horizontal and vertical axes and a key that includes abbreviations for places and standard life events.  Beginning with King Edgar (973-975AD) and ending with Queen Elizabeth II, English monarchs are listed, along with the dates that they reigned, down the right hand side of the page.  Perhaps the intention was to parallel, to provide context for, the events taking place in the lives of the generations on display.
The earliest mention of the Stortes is 1672 when John, who went on to marry Elizabeth and become a father to John (a yeoman) and Richard, was born.  The location noted for this life event is Somerset, with particular reference to Stoates Farm.  The Date branch of the family has been researched back to 1589.  Gabriell married Mary Winter and died in Stogursey, Somerset.  It is, however, the Craven line, sitting out to the side of the main chart and who married into the Date family in the early 1900s, that interested me most.  Cornelius (I like him for his name alone), who lived from1788/89 to 1850 and married Mary Kitson, was a Clothier by profession.  This occupation is reflected in succeeding generations.  Cornelius and Mary’s son Joseph was a Tailor/Draper, their grand daughter Elizabeth aka Lily a dressmaker and their great grandson John William Craven a Master Tailor.
I am seeing a pattern as I methodically study these family tree charts, particularly the larger scrolls.  It’s all about the details. On Chart 3 alone there are two sets of twins, including Samuel and Hannah Storte born in 1684, a Craven ancestor noted as marrying four times and two family members on quite separate branches who changed their surnames by deed poll.  Family members across the branches have lived in countries as diverse as South Africa, Canada and Lebanon and occupations are as varied as a mining engineer and a female preacher.  A Derek has the following notation next to his name, “Lost at Sea … HMS Eskimo (Frigate) Singa[kere] to Sydney”, while a Stoate relative seems to have served with the 3rd Somerset Light Infantry 1914-1918 and the RAF in Singapore in 1942.  The notation “SV223 R.A.N.V.A 1942-45  HMAS Strahshire HMAS Australia” is written above the name of a more recent Craven relative.  I suspect there are some stories worth unearthing here.
Looking at such a big document with tiny writing faded over time that I needed to inspect through a magnifying glass, it would be easy to miss the brief notations that, when thoroughly researched, would bring these ‘names on paper’ to life.  The lesson the Storte/Date/Craven family tree has taught me is to appreciate and not to overlook the detail.