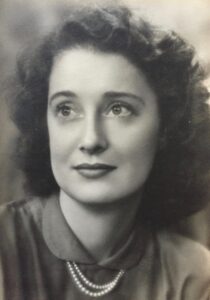 Portrait of Jean McGill about 1945.

As I pressed the button for the lift, I thought of how often my mother would have stood there waiting for the lift to take her up to Floor 4. I was standing in the foyer of what had been the old AMP Building, now MacArthur Chambers, on the corner of Queen and Edward Streets in Brisbane which had been used as the headquarters of the Allied Forces in the south-west Pacific during World War Two.  This building was chosen because of its central location and reinforced concrete roof and all the tenants were compulsorily evacuated under military orders from 21 July 1942 until 14 June 1945.

My mother, whose name was Jean McGill, worked in the Cipher Office in the AMP Building during this period.  She told us very little about this time of her life, likely because they were often sworn to secrecy or because she never thought what she did during the war was very important. She may also have felt that the men in the front line were making the real sacrifices, such as her brother John McGill who was a gunner in Bomber Command and died on 8 June 1944 during a mission over France during the D-Day invasion. She would always get tears in her eyes when she spoke of her brother, and his death was probably another reason she spoke little of this period. I remember taking her to a State Library exhibition about how Victory in Europe Day (V-E Day) was celebrated in Brisbane and after she had seen the displays, she looked at me and said ‘This was a sad day for us. We could not celebrate because John was not coming back’.

I regret I did not ask her questions about this period of her life even though she was reluctant to speak of her work in the Cipher Office. She did tell members of my family a couple of anecdotes, such as she never saw General MacArthur while she was working in the AMP building. She also recalled receiving messages regularly from a particular location in the Pacific and afterwards there was silence. They could only assume that the person had been taken prisoner or killed.

Consequently I have spent some time trying to piece together some understanding of what she did and this included visiting the old AMP Building. The lift finally arrived and I took it to floor eight where the Commander-in-Chief of the Allied Forces in the South-West Pacific, General Douglas MacArthur, occupied the boardroom which is still there. There is also an interesting museum which details many of the events that took place in the south-west Pacific during World War Two. However although I found information on what some of the women attached to his command did, I could not find anything on what my mother may have done. 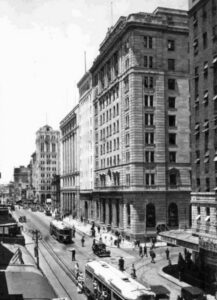 The museum held a description of the various sections on each floor of the AMP building. It included Signals Units, but I was unable to distinguish which Unit my mother may have been in. The main organisation that is always mentioned in relation to codes and ciphers during World War Two in Brisbane, is MacArthur’s Central Bureau based in the suburb of Ascot. The women and men working there intercepted, deciphered and decoded encrypted Japanese military messages, thus providing vital intelligence to the Australian war effort. They carried out their work in a large, rambling house called Nyrambla which is still there.

Later I found an article in the Courier Mail of an interview with Joy Taylor (neé Core) in April 2013.[1] Joy explained that she had worked at the Cipher Unit on the fourth floor of the old AMP building and was part of a handful of Australian women who worked in General Douglas MacArthur’s headquarters. She maintained that most of the work was routine, such as merchant shipping movements in and around Moreton Bay. The information they received from coastal watches or from merchant ships, allowed them to distinguish those from any military activity. Joy also said that in 1942 she had joined the Australian Women’s Army Service (AWAS) and I discovered that recruiting for the AWAS in 1941 and 1942 specifically mentioned cipher duties as part of possible work options.

However, I did have a breakthrough when I found an interview with Dorothy Hill who was an academic in the Geology Department at the University of Queensland when World War Two broke out.  In an interview in 1983 she related that she had contact with people working on ciphers in MacArthur’s headquarters and had ended up joining a group of civilian women there. In fact she became the officer in charge of a large number of undergraduates and typists in MacArthur’s headquarters. This was a great lead as I knew my mother was an undergraduate as she had been studying for an Arts degree when war broke out. Perhaps she had remained a civilian throughout the war and that is why there is no war record for her. 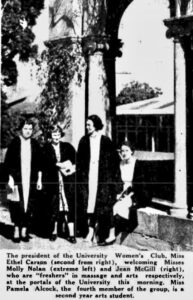 Unfortunately Dorothy did not provide a lot of detail. She joined the Women’s Royal Australian Navy Service (WRANS) and undertook training in Sydney and Adelaide and became an Operations Staff Officer in Brisbane. Her work included cipher and coding, accepting responsibility for the safety of shipping, and communicating with service personnel including commanders and ratings from Australian, American and British services. But she doesn’t make it clear where and when she did this.[3]

After the World War Two this building reverted to its former use as the AMP’s Queensland headquarters until February 1978 when the Society moved to AMP Place. In 1979 the ground and mezzanine floors were refurbished and leased as retail premises and offices and the building was re-opened and named MacArthur Chambers in honour of General MacArthur.

So I still have many questions. Where did my mother learn to read the cipher messages? Did she use the Typex Cipher machine? What was her daily routine? Were civilians employed in MacArthur’s headquarters for the duration of the war?

I now wonder what my mother thought when she was in the city and passed this building, as I am sure it must have held many mixed memories for her. I never had the opportunity to take her to the MacArthur Museum as it opened in 2004 a year after she died. She made lifelong friends during her time there and I wish I had been a fly on the wall when they met and spoke about their wartime experiences.