Since 1877, Ann Muir, my two times great aunt and sister to my great grandmother, Flora Muir, has been “missing”. Ann Muir was born in the village of Kenknock, Inverness, Scotland, on 23 May 1835, one of seven children born to Thomas Muir and his second wife, Christiana Grant. [1] In 1854, Thomas, Christiana, six of their children, and Thomas’ twin sons by his first wife sailed to Moreton Bay aboard William Miles.[2] 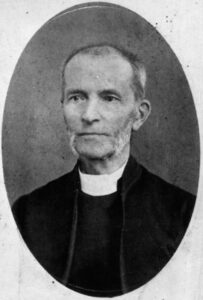 Ann and William Behan’s first baby, named Ann, was born prematurely in 1861. She lived for three days.[6] Five siblings were born after Ann, and they all died before their first birthdays.[7] The last baby, Archibald James Behan, was born in 1876 when his mother was forty-one. Baby Archibald died at twenty-one weeks of convulsions, and marasmus, a form of malnutrition. His death certificate noted that he had suffered these conditions since birth.[8] Archibald’s death was certified in writing by his mother, Ann Behan, my “missing” relative.

How can the deaths of six babies in one family be explained, and how did parents live with the disappointment? Infant mortality was high in the Australian colonies, with almost all child deaths occurring under five years of age, with the highest proportion in children aged under one. In nineteenth-century Queensland, more deaths were reported in Brisbane than in other parts of the colony, such as Toowoomba, where the Behans lived. Common infectious diseases killed children. Measles, for example, appeared in 1857, followed by scarlet fever in 1858, with the killer diphtheria arriving in 1860.[9]

Colonial administrators connected infant disease and death with poor sanitation, weaning, and climatic conditions. On climate, for example, the first and last quarters of the year were believed to be the unhealthiest time of the year because of warmer weather.[10] One major cause of infants’ deaths was diarrhea, possibly resulting from poor hygienic conditions and what was considered improper feeding of infants but more likely by unsafe water. Some diseases were epidemic and affected even healthy children. Whooping cough, scarlet fever, measles, diphtheria and dysentery were among them.[11] According to the babies’ death dates, three of the six Behan children died in Queensland’s hotter months. 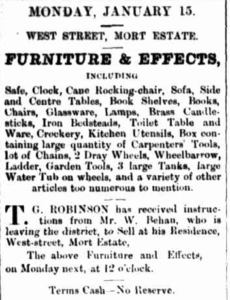 Whatever their causes of death, Ann and William Behan buried all of their children, six babies, in fifteen years. The heartbreak and grief of multiple bereavements must have been unbearable for Ann and William. They left Toowoomba after Archibald’s death, selling their West Street residence and other goods in 1877.[12] From that point, their trail goes cold. A William Behan is listed in the electoral register for Dalby in the 1870s, but I cannot be sure it is “my” William.[13] Ann Behan is missing entirely. I sometimes wonder if immense grief sent this couple mad, necessitating admission to an institution, perhaps an asylum, perhaps to deaths alone and unnoticed. If you see Ann or William Behan while researching your family, please let me know.

Thanks to Dr Madonna Gehan, historian and midwife, for her assistance with this blog.