Uncle Walter lives in a retirement village in Nerang, SE Queensland, where he has become a firm favourite with the other residents and staff because of his happy nature and his love of singing. Some residents now sing along with him, with some even trying karaoke for the first time. How well Uncle Wally (aka Walter) has settled in, is not surprising to his family. 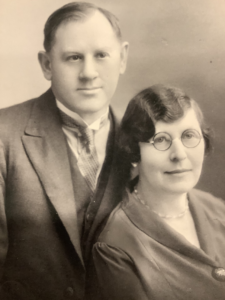 My cousin Carole still recalls that he looked and sang like Gordon McCrae, an American actor and singer who starred in the film versions of “Oklahoma” and “Carousel”.  Carole remembers as a young child listening to our grandfather Alan play the piano as Uncle Walter sang along in his beautiful baritone voice.

At the time of my birth, Brisbane was a country town with approximately 280,000 people. The Shrine of Remembrance and the City Hall buildings were still under construction and the Story Bridge was in its planning stage. 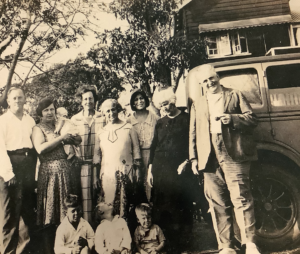 A Frankel gathering with Ida’s extended family – her mother Lizzy Isen and the Simmons. 1929

Two months after I was born, the Great Depression began with the collapse of the New York stock market. None of this meant anything to me.  All I remember is being part of a happy loving family with lots of extended family members and lots of friends. It is only on reflection that I realise how fortunate we were.

At the time of my birth my father was working in a managerial position with my grandfather, Philip Louis Frankel (1860-1943).  Their firm Philip Frankel Pty Ltd was an established firm that sold and distributed imported car accessories. My father drove a Hupmobile car.  Our family had so many happy times and adventures in that car.  We would go for drives on a Sunday, often meeting up with friends or other family members.

Dad had fought on the Somme during WW1 and it was during a battle there that he got foot trench.  This ailment compromised his health until his death.   He was very strict due to his upbringing values but being in constant pain didn’t help. 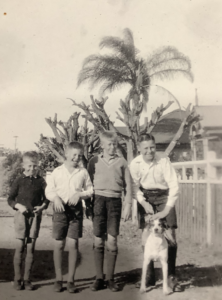 Mum on the other hand, had a different attitude to life, she was a loving mother, a good daughter and caring, supportive sister to her siblings, a good cook and looked after us boys well.  She was well-liked by everyone, had plenty of friends, a good social life and believed that a house was a home.  She didn’t mind that we rode our bikes in the house and encouraged us to bring our friends home.

As the baby of the family, I was Mum’s favourite and I got away with a lot of things. Mum would have card parties during the day. On these days, I would pretend to be sick so that I didn’t have to go to school, instead I would help Mum entertain her friends by making coffee.  Everyone loved my coffee as I would also include a drop of spirits. I’m not sure whether the women knew my secret but they always asked me to make them a cup of my special coffee.

My parents were supportive of me and any decisions I made. They each gave me their separate advice and said that anything I decided would be supported.  My brothers and I always said we couldn’t have asked for better parents. 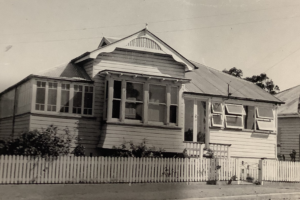 The family home “Keralda” in Swann Road Taringa in Brisbane

We lived at 109 Swann Road Taringa in a house called “Keralda”, a combination of Keith’s, Dad’s and Mum’s names.   In 1929, Taringa was on the outskirts of Brisbane as the suburb had only been gazetted into the Greater Brisbane Area in 1925.  Before that it was part of Indooroopilly which at the time was mainly farms.

“Keralda” was a large family home on a large block of land. It was a typical Queenslander with a central hallway.  Along the front and side of the house were enclosed verandahs. The front of the house was positioned close to Swann Road where we could look out to Brisbane town but the back of the house sat on high stilts as the backyard sloped steeply away to the bottom of the ridge.  (Poor Mum had to climb up and down 22 steps to get from the back porch to the laundry underneath).

From the back of the house we looked towards Indooroopilly.  In the backyard, Dad planted a large bed with different varieties of our favourite vegetables as well as an orchard of fruit trees: figs, persimmons, custard apples, lemons and mangoes. 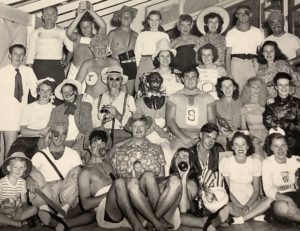 Next door to us was the old Cobb and Co Staging house.  There were a couple of other houses around us and plenty of bush.  “Keralda” with its many rooms and large area underneath (good for hiding) was the ideal place for four young adventurous boys with lots of energy in which to grow up.  My brothers and I had a very happy carefree childhood there.

There was less than two years difference in age between Philip and I. This meant we were often doing the same activities.   During our high school years, we both attended Brisbane Boys Grammar. For a time, we were in the same Bar mitzvah class, we attended the same parties and had the same friends. 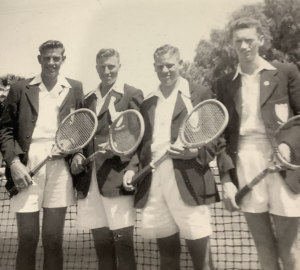 We both joined the Judean Sports Club where we played doubles tennis, eventually becoming the doubles champions.  Although Philip was a very good tennis player, I was the better player! After school I joined my father and my brothers in the running of the family business which my father inherited after his father passed away in 1943. However, as my 30th birthday approached and I returned from a trip to the United Kingdom (UK), I decided it was time to leave Brisbane. Melbourne awaited.

As my niece and her husband continued to walk towards me, I stopped singing and thought “She looks like my beloved Nebby (my brother Neville)”. My next thought was I must tell her about my life in Melbourne after I moved there in 1959.