Many years ago, my aunt told me a story in which she remembered sitting in a car in a car park while her father visited someone in an adjoining building. She wondered why she could not go with him, but her father made it clear he was going alone.  She learnt later that she was outside the Goodna Mental Asylum where her father was visiting his older brother William Alexander Dorsey Bell.

This story lingered in my mind so a number of years ago I commenced investigating how I may be able to access his records. Previously case records for people in mental asylums in Queensland were closed until 75 years after the death of the person, which in William’s case would have been 2015.  Unfortunately access rules changed for asylum records before 2015 and now case books for the old Goodna Mental Asylum are subject to a 100-year restricted access period. This means that if you want to access his case records now you need to make a request to Queensland Health under the Right to Information (RTI) legislation and include a letter providing medical reasons for wanting this information. 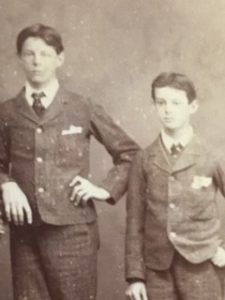 William Bell was the second son of Joshua and Margaret Bell and was born in Ipswich on 3 June 1865. During his early years he lived with his family on Jimbour Station near Dalby.  He went to Ipswich Grammar and then for two years, from the beginning of 1880 to the end of 1881, he attended Brisbane Grammar. He was described as being ‘thoughtful and earnest.’[1]  In December 1881 at the age of 16 his world was shattered by the death of his father. Soon after Joshua’s death, the family left for Britain, because it had been Joshua’s wish to educate his children in England. William studied law at Cambridge University and on 26 January 1888 he was admitted to practice as a barrister in the High Court of Justice in London.

The family returned to Queensland in July 1889 and he immediately applied for admission as a barrister. His application was accepted and he was declared ‘fit and capable to practice in the said Court as a Barrister.’ on 7 September 1889.[2]  William settled into life in Queensland and in November 1890, with his brothers Colin and Joshua, was part of the Queensland team that rowed in the Men’s Inter colonial Eight-Oared Championship. The team was coached by Joey but;

“About a quarter of a mile from the finish, Queensland was hit with a significant wash from a passing steamer and the two-seat blade was snapped. To minimize the impact of carrying him, the two-man jumped overboard. The Victorians made the best of the situation surviving the wash and passed the Queensland crew.[3]”

He became a Lieutenant in the Land Defence Force in May 1891 and in September 1893 he was made a Captain.[4]   At this time he lived at Belevedere House, on Milton Road in Brisbane but also with his brothers, Joshua and sometimes Oswald, in various places in Brisbane. Margaret Bell also wrote that he was also writing a ‘law book’.

But during the 1890s, Queensland, like the rest of Australia, was hit by an economic depression, severe drought and widespread unemployment. It appears that work at the Bar dried up, or was never forthcoming, and William also had to deal with his family’s dire financial situation. This financial pressure could perhaps have aggravated an already fragile personality.

The latest news of William was provided by his mother, Margaret Bell, in her letters to her son Colin Bell who was living near Longreach, Queensland. and indicate that William was not very successful as a barrister and was always struggling financially. In her letter in July 1895 ‘he is only one of the hundred young lawyers all waiting for work that never comes-’.  In the same letter she tells an amusing but sad anecdote about one of William’s trips to visit her at Jimbour.

He [William] took a holiday ticket per train and lost it   However he saw the officials and I believe had the half returned – on this he resolved to walk the whole way – starting at night from South Brisbane and getting to Mount Crosbie and then on via Esk, Rosalie, Bartons (Cumkillenbar) past Rockey Point at night – reaching here on Tuesday at 10 PM the same evening after a six days walk – I never saw Willie looking better or in such good spirits.

He visited his mother at Jimbour fairly regularly but in a letter to Colin in April 1893 she said ‘Willie never writes now. He has been very hard pushed for money and has not been well.  I hear he is looking very ill but cannot get him to say if he will come up or not’ and in a letter of 20 December 1894, she wrote that he was staying with her after a year’s absence and was looking very thin. 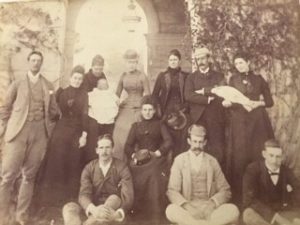 He appears to have been trying various ways of making a living such as acting as the librarian of the Supreme Court in December 1895 while the librarian was away, on a salary of two pounds a week. Then in February 1896 he wrote an article for the Dalby Herald on Political Association and Margaret was glad that he was ‘…interested in what is happening outside of his books-’.[5]

William wrote a diary at irregular intervals commencing in 1882, as the family were about to leave for England, with the last entry in 1885. On his 18th birthday on 3 June 1883, he wrote about his respect and love for his father and the grief he still felt in losing him when he was only 16 years old.

“…few men I have read or met are so great and good as my father, and few families have had a head to guide them so clearly and rear them so well. It is only at times I can conceive in true love that he is dead, that he is lying in the Toowong Churchyard and he … who we hold in as pure respect and love as ever mortals hold a father.  When the intense reality of it breaks upon me, I simply cry for then I am alone.”

He appeared to have been very religious and was considering entering the church but decided that ‘…as a Barrister I may still obtain the exhortation, by precept & example hoping to minister to others…’.  His diary also provides an insight into his sensitivity and his bouts of ill health. In his last entry in the diary, he says that

“I owe most of my failures, and even a young man of 19 has had many opportunities, small perhaps, for success & failure, to tepidity of that organ [the liver] … I am glad to think that the malady is not very general, else the world would be indeed miserable.’[6]”

But gradually his health deteriorated and in March 1904 his mother wrote ‘Willie is just as usual…in indifferent health.’  In fact, William’s health deteriorated further, and he was admitted to Goodna Mental Asylum on 30 April 1904 and was there, except for four years when he was transferred to an asylum in Toowoomba, until his death on 7 May 1940.

Why was William admitted to an asylum? Perhaps his mother and sister with whom he was living could no longer look after him. I have been unable to find out why or who admitted him to the Goodna Mental Asylum because I have only been able to access administrative files[7] not the case files which are not accessible until 2040. Many of the details in the administrative files relate to payment for his accommodation and various unpaid bills. His brother Joshua Bell paid the required £26 per annum until he died in 1911 and there is no record of who paid this amount after this date so it may have been the State.[8]

William was transferred from the Goodna Mental Asylum to the Willowburn Asylum (later the Baillie Henderson Mental Hospital) in Toowoomba on 15 February 1909. His brother Joey, then Home Secretary in the Queensland Parliament, had paid a visit to Willowburn Asylum in January 1909 so perhaps he thought it was preferable for William to be there.[9]  On 25 November 1913, William was transferred back to Goodna where he stayed until his death from pulmonary tuberculosis on 7 May 1940. He was buried in the Bell family grave at the Toowong Cemetery.

William’s brothers, Oswald who lived in England and Colin who lived near Longreach, were not able to provide support. His mother who died in 1914 and his sister, with whom he had been living, may not have been able to care for him. His brother Joshua was William’s only relative who may have been able to do something for him but perhaps his illness was too severe to have him living with him and his young family in Brisbane. Joshua was also a member of Parliament and, at that time, there was a stigma attached to having someone who may have had a mental illness and perhaps it was easier not to have him around.

Did my Great Uncle William ever recover after the death of his father? Or was there another reason that he was admitted to the Goodna Mental Asylum? It appears from his diary that he had poor health and probably suffered from depression. But this may not have been the reason for his admission.  Eventually I may have some answers to these questions but, in reality, it won’t bring back those many wasted years that he was confined to an Asylum.

[1] The details of his education come from a note by Pamela Barnett, Archivist from Brisbane Grammar School in response to a query by Joyce Phillips the author of Old Ipswich Days: Joshua Peter Bell and the Ipswich Connection, 2008.