↓
GSQ Blog→connections→Writing a family history – getting from there to here or here to there
Some time ago I talked about different ways we could say ‘perhaps’. In February 2015 the GSQ Writing Group turned its attention to ways of signposting and navigating through a family history. When writing up a family history there are many things that need explaining simultaneously, and it is almost impossible to pursue either strict chronology or a complete topic. As family historians we have to weave back and forth through time and topic because people’s lives are complex and do not always follow a linear pattern. Stopping in mid-thought to explain something can become confusing to the reader if not clearly signposted.
Signposts are variously described as navigational or connecting devices and can take four main forms according to a Washington University document entitled Connecting devices. Although intended for academic writing the descriptions of these devices show they can easily be adapted to a family history.  Another useful site is Cumbria University’s What is signposting.
A transition is usually a phrase which indicates that the writer has finished discussing one main idea and is moving on to another new idea. They are generally used in two places: the first is between paragraphs and signals a move to another idea; the second is between major sections of information and indicates a move from one topic to another. (This explanation is a good example of a signpost!)
A signpost can also be a phrase, or even a single word, which draws the reader’s attention to the specific point the writer is trying to make. These are typically used in three places: when distinguishing between items in a sequence; when summarising a series of ideas; at the beginning of a phrase.
A preview is used when a writer wants to highlight some forthcoming information and explain how it is organised. They create expectations about what is to come, and in what order, so help to keep both the writer and the reader on track. Previews are generally used in the introduction where the writer outlines what material is to be covered, how and when. They are also used between major sections of information as a lead-in to following sections.
An internal summary provides an opportunity to review what has already been covered before moving on to new information. They hopefully ensure that the reader has understood and remembered what they have already read before new material is introduced. If the reader has missed something important, this is the place where they can catch up. Internal summaries are most useful when they are placed at the end of each major section of a work, or at the end of the second section of a work which has more than three major sections.
As preparation for the meeting, group members were asked to read through material they had written and share their examples; these were often in two parts – a lead-in sentence, followed by a summary sentence. Some of the examples fit neatly into one of the four categories listed above, whereas others could fit into more than one. The main thing is not to get caught up in whether you are using a transition, a signpost or a preview, but just to use whatever seems most appropriate given what you are writing. The need for connecting or linking devices is often revealed if someone who is not directly involved with your family reads your draft and experiences some difficulties in following the narrative. As always, choose your reviewer carefully. The following ideas should help both the experienced and the novice writer. 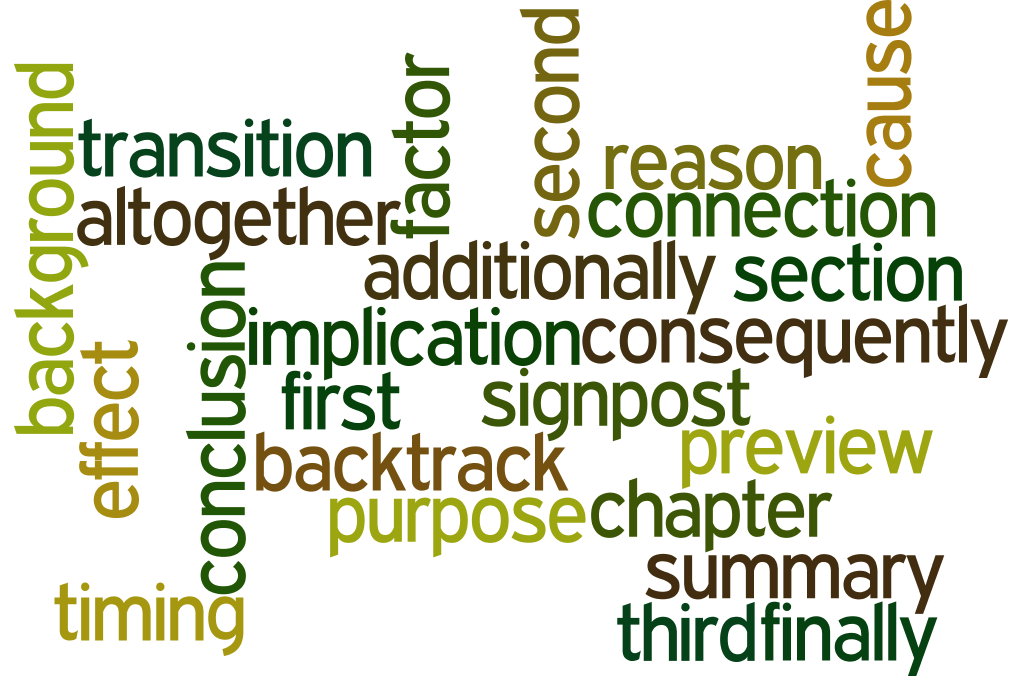 Transitions
Signposts/reminders
Previews
Internal summaries
There are many other useful and simple conjunctions and phrases which help your writing to flow by providing connections between the ideas in various paragraphs and chapters. Consider the following which show cause and effect: accordingly; as a result; consequently; for that reason; for this purpose; hence; therefore. Place your ideas in time: again; at first; at least; at length; at once; at that time; at the same time; concurrently; during this time; earlier; eventually. More succinct ways of summarising ideas include the following: all in all; altogether; as has been noted; in brief; in conclusion; in other words; in short; in simpler terms; in summary.
When writing a family history try to keep the narrative flowing. If you find you’ve gone off on a tangent, but the material is essential to understanding what came before, or what comes next, let your readers know by using words or phrases such as those listed above. If the material is not essential to the storyline, but should be included somewhere, consider putting this extra material as a footnote, endnote, or even an appendix, although it’s worth noting that many readers don’t bother to refer to these.
Signposting your way through a family history is kind to readers. Even though we may have felt we were going through a maze as we were undertaking the research, we probably shouldn’t replicate that experience for our readers – help them on the journey through your family history.