History was one of my favourite subjects at school, and I love nothing better than wandering around castles, museums, churches and lately graveyards.  Family history or rather, genealogy has proved to be new found love.

When we start researching our family trees, questions about our families often go unanswered, our busy lives take over, family members come and go, and often we have no-one left to ask.

Oh, how I wish my mother was still alive to ask her about her family. It’s this love of history and those unanswered questions which has led here – trying to find out if a family link exists between my maternal family and Viscountess Thurso and the Sinclair family – founders of the Rosslyn Chapel. This is a little of the history and facts I have uncovered on my journey researching my 2 x Great Grandfather, Peter Reid.

My mother was born Patricia Reid in 1928 to Eric Sinclair Reid (1878 -1950) and Winifred Reid (nee Cheeswright) (1898 – 1970).   I knew very little of my grandmother and even less about my grandfather Eric Reid, and herein lies the answers to the questions I should have been asking my mother about their lives.

Peter was born in Galloway Hill, Wick, Scotland to Alexander Reid (1769-1837) and Jean Sinclair (1771-1860).  Did you notice “Sinclair”, a common thread in the Reid family – most males have a Sinclair included somewhere in their name.  I haven’t been able to trace Jean Sinclair back to “that” famous Sinclair family of the Da Vinci Code and Rosslyn Chapel fame, but I make my husband address me as “Viscountess Helen” almost every day – and here is why….

Whilst searching the journals in the library at GSQ, I happened upon an article in the Caithness Family History Society Journal, titled – My Robertson and Reid Families by Margaret Sinclair, Viscountess Thurso. My interest was immediately drawn to the mention of the Reid family (and I must admit Viscountess Thurso had me enthralled).  It was here where Margaret (Viscountess Thurso) makes reference to her family, Alexander and Jean Reid and their children, particularly Peter and Maria Reid.  Interestingly, it wasn’t until Margaret married Robin Sinclair (yes of “that” famous Sinclair family) in 1942 that she learned about the Sinclair family history and realised she knew very little about her own family.  Margaret realised also she ought to have asked more questions about them when her parents were alive.

Margaret’s mother’s family name was Reid, and they began with a John Sinclair who married Elizabeth Rushell. They had a son who married Elizabeth Bremner, who in turn had a daughter Jane, who married an Alexander Reid.  Alexander had eight children, the third being Peter born in 1809 who married Maria Caldwell.    Margaret found her own link to Wick and its inhabitants (which also happens to be my link) and a little bit of “Sinclair” thrown in for good measure.

A little history for you now.  Wick is a town in the royal burgh of Caithness in the far north of Scotland.  Around the time of Peter’s birth in the early 1800s, Wick’s wealth lay in the herring fishing industry and at its peak in 1900 it was one of the busiest ports in Europe, with a fleet of 1120 strong. Several things combined together to develop the herring fishing in Scotland.  The building of Pulteney Harbour in Wick in 1811, and the discovery of a new way of curing herring. The Scots had initially been taught by Danish herring fisherman who cured their herring at sea.  Large fleets of these fishing vessels remained at sea for months.  It was not practical for the self-employed Scottish fisherman to operate in this way, they preferred working offshore and landing their catch immediately in a fresh condition every morning. The herring submitted for curing had to be newly caught and absolutely fresh. Fresh fish was the best way to supply the home market.  Salt was not allowed near the fish before it landed as it tended to soften the fish and the quality could be monitored more closely on shore. This method was called the ‘Scotch-cure’ system and was introduced in 1819.

The British Fishing Society appointed fishery officers to monitor the quality of the herring being caught and a system of applying a crown brand to the barrels of cured herring was adopted.  All barrels had to be uniform in size and each barrel was marked with the date the fish was cured, the name and address of the curer and the name of the Fishery Officer who applied the “Crown Brand”.

The “Scotch Cure” and the “Crown Brand” set a high standard for herring cured in Scotland, and it quickly gained a reputation for being the best in the world.  Fishing nets were improved and were woven in cotton not hemp, which was much heavier.  This meant that more nets could be carried on the boats and increased the catching power.  Open boats were improved also and decks were introduced making the boats safer and the transition from the age of sail to mechanical power was welcomed. 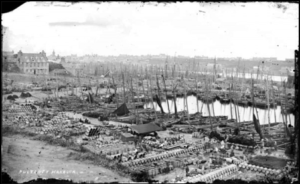 One of the earliest photos of Wick Harbour c 1863

The biggest catch in one day was recorded on 23 August 1864. 976 boats landed 24,400 crans of herring. (Crans were baskets of legal measure used in weighing and carrying herring). 3000 fish gutters processed over 24 million herring on this day.

It was into this bustling and thriving port of Wick that Peter Reid introduced his publishing business and eventually The John O’Groat Journal was born.  Peter left school at an early age and worked for a short time with his father learning fishcuring, which was the staple trade in the town of Wick.  Being of an enterprising mind, at the age of 17, Peter proceeded to Dundee with the intention of finding his fortune.  It was here he obtained employment with a Mr Miller a printer and publisher.  After 3 years of training in the art of printing he returned to Wick and in 1829 he set up business as a bookseller and stationer. 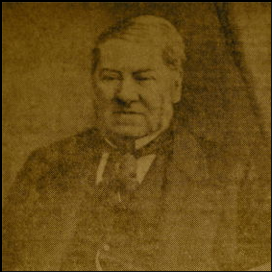 The first printer in Caithness was William Todd, who acquired a printing press in 1825 and installed it in his shop in Thurso.   In 1830 Todd moved to Wick where he continued to print until his business failed, mainly due to introduction of Peter’s publishing business.   Peter had continued with his interest in publishing and printing and he was particularly active in producing pamphlets mainly commissioned by ministers and other educated members of the community.

The business of bookselling was looked upon in the north as one very doubtful of success, the country being very poor, money scarce and readers few and far between. By perseverance, and good business and economical habits, Peter succeeded beyond expectations.  He was subsequently induced to add a small stock of type and a printing press. This he introduced in the year of the Cholera epidemic in 1832.   Cholera greatly affected the fishing industry and there was real risk of it being suspended. The alarm in the town of Wick was great, and death rates were reported as being more than they actually were.  In fact, a great number of men and women involved in fishing and fishcuring actually returned to their homes in southern lands to escape the cholera epidemic.

Peter issued a bulletin from the printing press, giving a daily report on the number of persons affected, the number of deaths and recovery rates.  It was Peters’ printing of this daily bulletin that alleviated much of the grave concerns feared by the inhabitants of Wick associated with cholera. The recovery rates were hardly ever reported, only the ever-increasing number of deaths, until Peter’s bulletins.

Peter also had aspirations of a political nature. 1832 was the year of the great Reform Bill, which introduced wide-ranging changes to the electoral system of the United Kingdom, including Scotland.  Peter took a leading and active part in the cause and in 1884 when a demonstration in favour of the Franchise Bill was held in Wick, Peter appeared on the platform as one of the political veterans of 1832.

Whilst on a visit to Edinburgh sometime around 1833/34 Peter visited the well-known printers and publishers, W & R Chambers.  Chambers were introducing a new typeface for their Chamber’s Edinburgh Journal and Peter purchased the discarded type and set up his own publishing business in premises at Union Street Wick.  In February 1836 he launched The John O’Groat Journal (as founder and sole proprietor), and to this day it is still in publication, 182 years later.

The launching of the “Groat” was quite an undertaking at that period of the country’s history, readers were limited, there were taxes on advertisements as well as on the paper.  The town however, was on the rise, the outer harbour was completed, trade was increasing and the introduction of the railway from Aberdeen was established a few years later.  Articles on the herring trade attracted the notice of fishcurers and fishermen in other parts of the country and they were induced to travel north and prosper.

Peter was quite the businessman and became a coal and lime merchant, and also an extensive dealer in herring nets and fishing material.  He became a shipowner and a prosperous herring merchant.  It was reported that for over a half a century he was one of the most enterprising men of the town.    He was a Justice of the Peace for Caithness, one of the first members of the Wick Chamber of Commerce and an original member of the Gas Company and a Pulteneytown Commissioner for over forty years.

Peter and Maria Reid’s son, Alexander tragically died in 1875 having drowned in Cook Straits, New Zealand. This together with the collapse of the City of Glasgow Bank, in which Peter lost the greater part of fifty years’ profit and savings and this had a lasting effect on his health. He died in 1886, never fully recovering.

He left behind a lasting legacy and imparted a love of publishing, the newspaper business and politics. Future generations of the Reid family have gone on to become writers, newspapers owners and publishers, profitable business owners, lawyers, and even a Governor of New South Wales in Sir Eric Winslow Woodward (1 Aug 1957 – 31 Jul 1965). 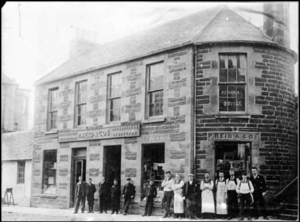