↓
GSQ Blog→Tasmania→The lady in the painting 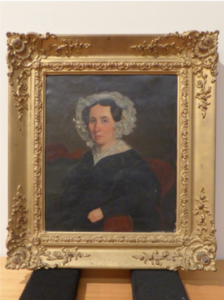 As I looked at the face on the computer screen, I felt goosebumps rising.  It was if I was looking at a blend of my father’s two sisters, Jean and Betty.  I’d been idly typing names into good old Google late one night… Mary Steven, Mary Ainslie, James Ainslie, Mrs James Ainslie... and up she popped “Mary, Mrs James Ainslie”.  I was looking straight into the eyes of my 2x great grandmother, Mary Ainslie!  I couldn’t believe it! Amazingly, a portrait of her had been painted in Hobart and was now in the possession of the National Gallery of Australia (NGA) in Canberra!  Information accompanying the painting, and confirmed by the Allport Museum Hobart, matched the records I’d already found.  This was indeed “my Mary”. To say I was excited was an understatement to say the least.

I immediately contacted the gallery to ask what they knew of the painting. While it is unknown why Mary was chosen as a subject, they could tell me that the artist was Norwegian Knut Bull, who had been convicted in 1845 of counterfeiting a £100 note in Britain and transported for 14 years, initially to Norfolk Island and then on to Van Dieman’s Land in 1847. The NGA records showed that the painting had initially been in the possession of family members and then had been sold on to a couple of private collectors before being bought by the NGA in 2012 for an undisclosed sum.   Predominantly a landscape artist, Bull also painted portraits of  several Tasmanian identities.

I was offered a private viewing of the painting and of course I leapt at the chance; it’s not everyday you get the opportunity to “meet” an ancestor.

According to the curators at NGA:

Bull depicted Mrs Ainslie with a subtle sensitive attention to detail. Mrs Ainslie’s cool steady gaze and neat attire convey a sense of her as a well-dressed and calm, yet serious character. Bull has also captured a glowing quality in the sitter set against a darkened background; her white bonnet is luminous against the black, and her cheeks have a rosy sense of warmth. With her attire and the glimpses of rich red wooden furniture on which she sits, Bull suggests a comfortable social status. The painting is a fine example of colonial Tasmanian portraiture.

What a lovely description and I certainly felt a calmness about Mary when I spent time with her. Her appearance certainly suggests that at least at the time the portrait was painted, that Mary was a lady of comfortable means. 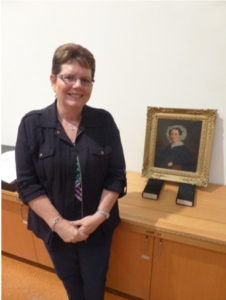 Robyn with the painting

As you can see while the painting isn’t large (neither is the Mona Lisa), it is framed by an ornate gold frame which I think complements the painting well.

James and Mary Ainslie, from Lanarkshire, had arrived in Hobart on board the immigrant ship Louisa in January 1853. With them were their children Mary, John, Euphemia, Emily, Georgina (my great grandmother) and Jemima. Eldest son, Archibald, remained in Scotland.

James Ainslie was a tailor, and according to the immigration records, on arrival in Hobart, the family left the Louisa at their own request. An articulate  man, James penned a letter, published in the Hobarton Guardian, on behalf of the passengers of the Louisa to thank the ship’s surgeon, Dr Kitching and teacher Mr Bray,  for their kind superintendance and kind interest during the voyage.

The family settled in Argyle Street, Hobart and James took up work with Mr George Belcher, an established  tailor of Murray St, Hobart. I wonder, could it have been that that Bull painted Mary’s portrait in exchange for newly tailored clothing some time after receiving his conditional pardon in November 1853?

Unfortunately all was not smooth sailing so to speak. Articles in Trove and from the Tasmanian libraries reveal that in September 1853, Mr Belcher’s infant son died of croup and a little over 12 months later, Mr Belcher himself died of “delerium tremens” (the DTs) resulting from severe alcohol withdrawal. I wonder how this may have affected James workwise.

In December 1854, a report in the Hobarton Mercury read, “Mr Ainslie, the tailor, while on his way home from the house of a friend at the Old Wharf was assaulted by three ruffians who knocked him down and robbed him of his hat, his watch and £7 in money”. This was a considerable sum in those days; another great loss for James, the family breadwinner.

In 1859, James was found wandering “an unhappy man” and remanded to the New Norfolk Hospital for the Insane (Hobart Town Daily Mercury) where he died in 1860, a pauper, from an “affection of the heart brought on by previous intemperate habits” according to the inquest report. I contacted Mark Krause from The Willow Court History Group, who are restoring the New Norfolk Hospital; he suspected James may have suffered from a form of Post Traumatic Disorder leading to his admission and demise.  A sad end for my 2x great grandfather.

What happened to Mary?? I suspect she led a relatively peaceful life in Hobart after James’ demise. I hope so anyway. Two of her daughters; Mary and Georgina married and left for Grafton NSW, her youngest daughter, Jemima married and settled in Sydney. Daughter Euphemia and son John remained single and in Tasmania. Daughter Emily became the third wife of Francis Anderson Esq, a prominent Hobart builder and 29 years her senior. Up until Francis’ death in 1875 and subsequent sale of his properties, the Valuation Rolls tell us that Mary lived in one of several homes owned by him in Macquarie Street, just a block away from the harbour. At the time of her death in 1887, at the grand age of 82, Mary was living with Emily in Elizabeth Street. Mary died of “old age”, unlike her poor husband, and is buried in the Cornelian Bay Cemetery with Euphemia and John, and next to Emily, Francis and their daughter. 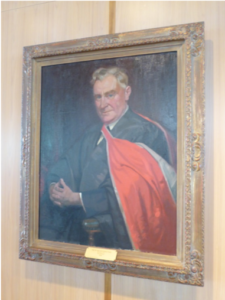 Incidentally, Mary’s great grandson was Sir Earle Page, leader of the Country Party and Australian Treasurer. He became Australia’s 11th PM (for 19 days) following the death of Joseph Lyons and prior to the election of Robert Menzies in 1939. His painting also hangs in Canberra, but in Parliament House, and yes, I’ve visited him too (after all he’s my 2nd cousin  …once removed).