Occasionally you hear a story of someone who arrives in a country looking for their ancestors and commences wandering the roads and byways. Suddenly, seemingly by chance, as they have done very little research, they stumble across a record, a house or the burial place of a long lost relative. The other story, and the most common, especially if your relatives came from Ireland, is the one where you do endless research, go up and down genealogical roads, constantly hitting dead ends, following false leads and find nothing.

In tracing my great-great grandmother Sarah Bell (nee Alexander), the story was somewhere in between. I had a lot of information on my great-great grandparents Sarah and Thomas Bell from their arrival in New South Wales from Ireland in 1832.  But I wanted to find out more about their lives and where they came from in Ireland so a number  of years ago, when we decided to visit Ireland, I started doing some research in preparation for the trip but, as many have found before, it was difficult.

I knew that Sarah Bell (nee Alexander) had lived in County Galway before she married Thomas Bell as I had found her death notice from 1853 which provided me with some information.

From this information I started by researching the name, Maryville, and found it was a reference  to Maryville House[2] which was located in the townland of Cahermore in County Galway. A  townland is Gaelic in origin and is the smallest administrative division of land in Ireland but they are not always marked on signs!  I also found an 1841 ordnance map on askaboutireland.ie which had Maryville House marked on it. 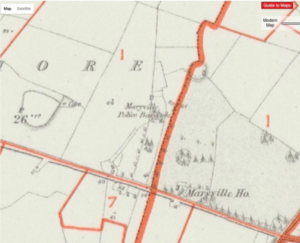 I then tried to find a birth or baptism record as, from the death notice, I knew that she had been born in 1803 but as the Bells were not Catholic but Church of Ireland, this made it difficult as many parish records were destroyed or are hard to find. I identified the parish Sarah had lived in and checked to see if there were any records of this parish held by the Representative Church Body Library in Dublin but there were none covering the period I needed.[3]

Once we arrived in County Galway, we headed towards the town of Gort using the 1841 ordnance map, the photo of  Maryville House which only provided the name Cahermore Townland as the address, and our trusty GPS! We passed the tiny town of Kinvarra and travelled along the road where we thought the house may be but found nothing except many large, new houses either for rent or for sale with no one in them. This was just post GFC and a housing disaster had hit Ireland. My son had the brainwave of putting the townland of Cahermore into the GPS and amazingly the GPS politely directed us to a new route which we followed for some time. We were about to give up and turn back to Galway when my husband, who was sitting in the back seat with the photo, suddenly said “Isn’t that it? I recognise the windows.” And there was the house in the photo, Maryville House! 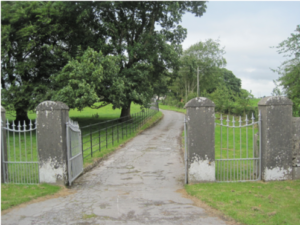 I was very excited but still unsure this was really the house. We pulled up at a long driveway and, not wanting to seem too presumptuous by driving in, walked up the driveway.  Luckily the daughter of the owners was home and I gave her the long story of how I thought this was where my great-great grandmother had lived as a child.  She very politely invited us into the beautiful dining room and offered us afternoon tea.   She then rang her parents, Paddy and Marie, who came post-haste to see the odd contingent from Australia.  We ended up having a very pleasant afternoon tea with them all!

At the time of Griffith’s Valuation in the 1840s, Arthur Alexander, who was Sarah’s brother, occupied Maryville House and 260 acres in the townland of  Cahermore. Arthur had taken over the house and farm when his older brother, John, died in 1847. 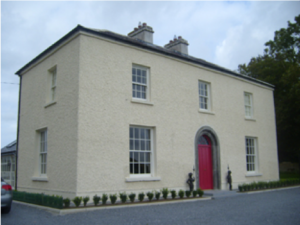 A notable figure in the person of Mr Arthur Alexander, Solicitor, of Gort is gone from Galway society. The deceased was well known in Gort, where he resided and about it for some years, he did not however practise at this profession. He died on Sunday at his residence Maryville, Cahermore. He was the son of John Alexander, Esq, uncle of the late Sir Joshua Bell of Queensland Australia and was heir presumptive to the dormant Earldom of Stirling.[4] 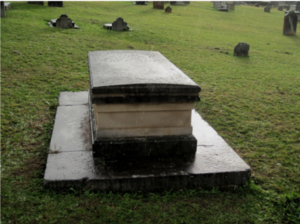 Sarah died well before her brother on 12 June 1853 in Parramatta and was buried in St John’s Burial Ground.

During this trip around Ireland, we saw beautiful countryside, learned about their fascinating history, met friendly people and listened to Irish music. But we also saw evidence of what happened to the poor tenant farmers during Irish history and particularly during the potato famine in the 1840s. So as excited as I was to find the place where my great-great grandmother had been born, I also reflected on  how the Alexanders may have treated their tenant farmers.