My last blog was about Captain Fred Rhodes, master mariner, WWI veteran, journalist and author.  I called him a man of mystery because I could find no photograph of him.  I didn’t look hard enough…

To recap: after a stint as an infantryman in the A.I.F. (NAA 6858), Fred accepted a commission in the British Naval Reserve (Admiralty 340/115/35). He served on a destroyer for the remainder of WWI and was discharged with the rank of Captain, a title he retained throughout his life. Fred’s struggle to leave the infantry in order to serve at sea, where his knowledge and experience might assist Britain’s war effort, was possibly his first encounter with bureaucracy.

Post-war, Rhodes was appointed Harbourmaster at Rockhampton, at a time when Queensland’s Labor government proposed to abolish the upper house of Parliament. He spoke out against the proposal, received wide public support and a degree of notoriety and was promptly transferred to Thursday Island, which he regarded as an attempt to ‘bury’ him in a backwater because of his political views. Rather than accept what he considered a demotion, he resigned as Harbourmaster but remained in Rockhampton as a marine insurance agent and freelance journalist.

After this second clash with bureaucracy Fred appears to have decided to avoid further battles. For more than 30 years he was a contributor to the Rockhampton Morning Bulletin and its weekly the Central Queensland Herald. Writing under the pseudonyms ‘Historicus’ and ‘Junius’, he spoke his truth without the risk of having his message devalued or submerged in a maelstrom of controversy by those who were politically indisposed to his views.

The general public was intrigued to know the identity of this prolific journalist. The CQH published letters and drawings from readers attempting to identify ‘Junius’: 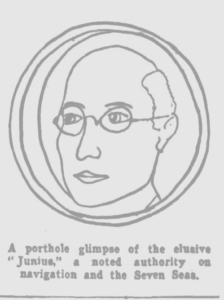 Rhodes continued to write in obscurity until 1937 when his two-volume maritime history of Australasia was published (‘Pageant of the Pacific’, F.J. Thwaites, pub., Sydney, 1937).  His photograph appeared on the frontispiece: 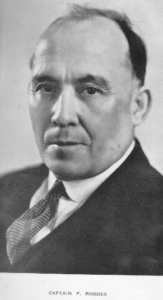 ‘Pageant’ is a chronology of shipwrecks, whaling, pearling, convict transports (including ships’ names, ports of embarkation, dates of arrival and numbers of prisoners landed), Australia’s participation in the Great War and – in the concluding chapter – the burial at sea of H.M.A.S. Australia, flagship of the Australian fleet, off the heads of Port Jackson where 136 years earlier Captain Arthur Phillip founded the first settlement.  It is a remarkable tick-tock replay of Australian history from 1788 onwards, compiled from official and private journals, evidence presented at trials and other documents.

‘Pageant of the Pacific’ is available by inter-library loan from the State Library of Queensland.