↓
GSQ Blog→Uncategorised→Work is always with us!

Working to provide money for food, a home and the essentials of life is something we all do as did our ancestors. However working conditions in the past were very different to today.

Very few of our ancestors had permanent jobs. Most were on casual labour, without holiday or sick pay. They worked six days a week for up to, depending on occupation, 12-14 hours a day.

Not all workers gained the right to a 8 hour day at that time. Retail and domestic servants, even past the 1890s continued to work long hours.

It took until 1948 for Commonwealth legislation to reduce the six day week to the five day week, most people know today.

Labour Day has been celebrated the first Monday in May in Queensland since 1912. On the 16th March 1861 was the first parade of skilled workers  who had gained their eight hour day. The parade became a yearly institution around Australia, of workers and unions with their colourful banners. 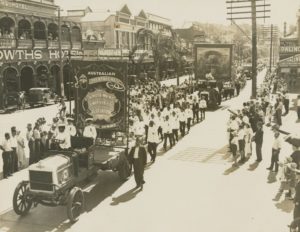 Many of our ancestors would have walked in those marches and, in fact, as a child I marched in a number in Brisbane up to the old Trades Hall in Brisbane.

Many of these marches were reported in the newspapers with photographs.

Knowing your ancestors conditions of employment can tell you much of their lives. Did they work in a manual occupation? Did they work for themselves as a farmer or shop keeper which meant they worked very long hours without any Government legislation.

Did they work in an office or a  Government job which for very many years were considered very good jobs as they were usually more permanent jobs, with much better working conditions.

What were your ancestor’s working conditions?