↓
GSQ Blog→Asking for help→Find and use State Library of Queensland digitised images.

The right image carries a powerful message and most researchers are looking for one to enrich the meaning of their story. In recent years there has been a surge in digitisation of a diverse range of pictures at State Library to achieve that. Many are free of copyright restrictions and high resolution copies can be downloaded for use; in this case, just acknowledge State Library. It is also possible to expand the quality of the content and its depth by making links to documents and accounts of experiences. Use the State Library catalogue, One Search, or Trove, the Australian portal where State Library has also distributed its digitised newspaper, magazine, maps and images content.

Images of ships are popular because the immigrant journey is such an important transitional experience for many families. Check State Library catalogue One Search by the ship name, using Advanced search by the ship name, (keyword – ship, and material type – Images). Advanced search. Alternatively search Trove Images Maps & Artefacts which will net available pictures from all Trove contributors. 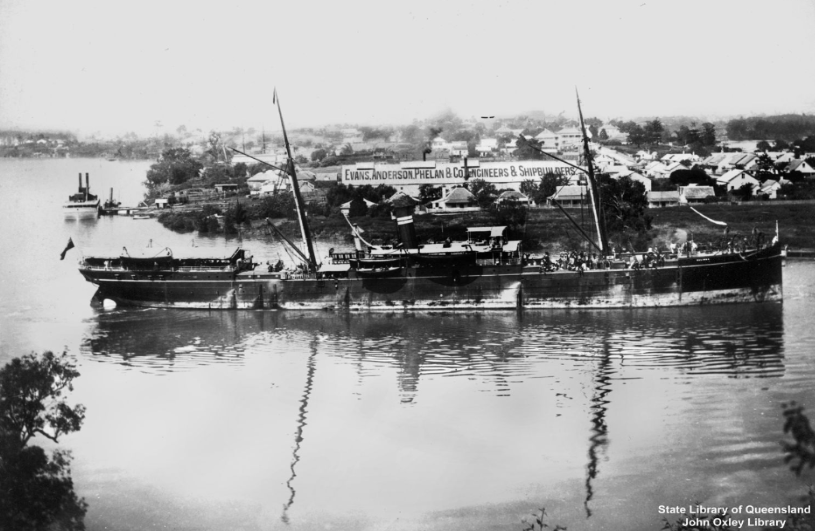 Find newspaper accounts of the Queensland voyages using Trove historical newspaper and keywords such as ‘Bulimba’ and ‘ship’.

The Excelsior, a small vessel, is shown bringing passengers and their luggage from the Torilla anchored out in the bay to the immigration depot, Yungaba, at Kangaroo Point.

There are more photographs of ships and arrivals from the latter years of the 19th Century and many more in the 20th Century. 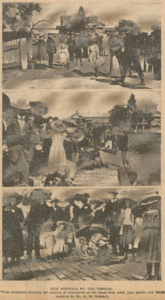 New arrivals by the Torilla
Immigrants have disembarked from the river vessel, and move up the jetty towards Yungaba (background) which opened in 1888.

In 1911 the Torilla brought the largest immigrant contingent to Queensland up to that date – 1600 approximately. These pictures captured what would have been, except for the high number, a typical arrival scene for the period. A shipping strike in England meant that passengers booked on other ships transferred to the Torilla rather than miss the opportunity to leave as planned.

Passengers disembarked at ports along the Queensland coast. A few Brisbane newcomers took the train service between Pinkenba and town. The arrival of so many people made an unusual demand upon the immigration authorities. Yungaba was capable of accommodating only 450 to 500 including children. Therefore, various boarding-houses in the city were used; other arrivals were furnished with orders, entitling them to private lodgings for a short period.

Find a photograph of the Torilla in Trove.

In a time before motels, family holidays were often simple affairs of staying with family or camping. This family had a caravan but many others would have had tents. 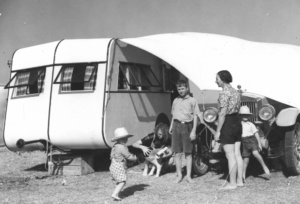 In 1938 caravanning became so popular that there was a new magazine the Caravan-eer. An article, ‘Across Australia in a Caravan’ in the Telegraph 1 January 1938 p 20, complete with illustrations and a sense of adventure and new experience would have been enticing. Use keywords such as ‘caravan’ and ‘camping,‘ selecting from the different options in Trove such as historical newspapers for articles and Trove Images Maps & Artefacts for additional photographs. 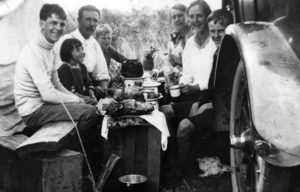 The lunch was taking place between a tent and the side of a truck which was used as a seat for three of the family. The lunch has traditional elements such as the plum pudding and roast, but pineapple adds a local element to the meal. Keywords such as ‘family Christmas’ and selecting ‘images’ in Advanced search opens up quite a choice. 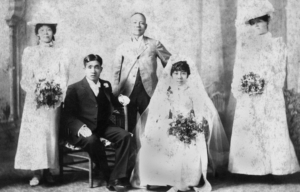 Teresa Sue Yek from a prominent Rockhampton family business, married James Ung Yumm, a storekeeper, at St Paul’s Cathedral, Rockhampton. The article, The Sue Yeks of Rockhampton in the Central Queensland Herald 23 June 1955 p 29 relates the background of Teresa and James within their families and the business life of Rockhampton. There are lots of images of ‘Queensland weddings’ to be found using those keywords in One Search.

The words ‘leaving Biloela for Darling Downs, 1930s,’ are written on the back of the photograph. ‘Biloela’ was the keyword used in the search. What would the journey have been like? The RACQ in this period published regular reports. This was a more desirable report for the period: Week-end trips. State of the Roads in the Brisbane Courier 24 May 1930 p 17.

Here are some more tips which may help your search for digitised material State Library of Queensland has contributed for you via its catalogue, One Search, and the Trove portal.

Use options within the catalogue record

When you find something of interest, use options within the catalogue record provided, such as the subject headings or ‘view all the images from this collection.’ There are lots of pictures of houses but they may be catalogued differently. I searched using the phrase, Evans St* (allowing for an abbreviation) Nundah to pick up these pictures of the same house. The first picture, date of photograph unknown, tells us the builder’s name and the year it was built. 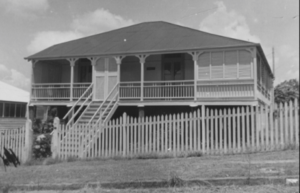 The second photo from the Corley collection was taken in the late 1960s-early 1970s. The houses, down Evans St from Rode Road at Nundah, were built in 1912 by D. Gamble and cost 300 pounds each.

Options in advanced search and along side bar

Narrow and focus your search using the options on the One Search page.

The emphasis has been on images and linking them to enriching material. In addition, documents, books, maps, newspapers, journals and music are online. You can select by date, and accessibility.

Explore your interests; make and tailor your choices.

If you need help Ask us