Nelly and Nancy in about 1940 with my father Hugh. Photo is from the author’s family collection

When I was growing up, I had two great aunts who I dearly loved and who were a constant presence in my life.  They were always there, in the big stone house down by the river, one block away from the centre of town. My family and I visited them regularly and sometimes stayed with them. When my brothers and sisters and I were very young my mother would drop us off to their house while she did the shopping. They looked after us if our parents went out in the evening. When our house was inundated with flood waters, we sheltered with them. When we were older, we would call in to see them on our way home from school. We knew we could visit them at any time for any reason and be welcomed with open arms and offers of cakes and biscuits, cups of tea or glasses of “fruit cup” cordial. Their names were Nellie and Nancy and they were my father’s aunts. They lived in Lismore but had grown up on a farm in North Codrington near Coraki in the Northern Rivers Region of New South Wales about 30 kilometres from Lismore. Nellie (Ellen) was born in 1889 and Nancy (Ann) was born in 1890. They were the middle daughters of 6 children.

Their mother was born at Runnymede Station, in New South Wales, near Kyogle in the Northern Rivers District. Their father was born in County Tipperary in Ireland and came to Australia in 1863 at the age of 20. He took up land in the Northern Rivers Region of New South Wales near Coraki. He became a very successful farmer and owned farms in the area as well as property in the town of Coraki. The family led a comfortable life in spite of the ever-present hardships of living on the land. Nellie and Nancy went to school in Coraki and told us stories about how they milked the cows in the early morning and then raced to catch the ferry across the river to school. 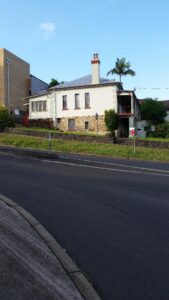 Views of Nelly and Nancy’s house in Lismore. The house was sold in the 1960s and is no longer in the family.
Photo taken by the author in November 2018.

By 1915 their father had retired from active farming and the family had moved to Lismore and were living in a house called Riverview on the banks of the Richmond River (now known as the Wilson River).  The house was built in 1880 and is still standing. To me this house was a mysterious and magical place. It was an old two storey stone house with many rooms linked by hallways which my aunts called passageways. This gave a further air of mystery to the house because I associated passageways with spies and smugglers. Perhaps, I had read too many children’s adventure stories. By the time I was born, Nellie and Nancy and their brother Jack were the only ones living in the house. Their parents had died many years before and their siblings had married and moved away. Nellie and Nancy and Jack never married, and they lived together until their respective deaths. Nellie died in 1971, Jack in 1973 and Nancy in 1985. 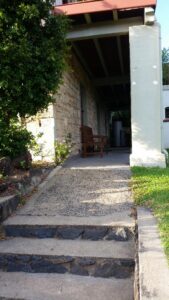 of Nelly and Nancy’s house in Lismore. Photo taken by the author in November 2018.

We loved Nellie and Nancy and we knew they loved us. They were kind and caring and their home was calm and quiet. A photo of them taken in about 1940, when they were in their early 50s shows them unsmiling and looking very serious. However, I remember them as funny, mischievous, laughing, joking and full of interesting and often farfetched stories. We never thought of them as old. They were different and old fashioned and we found this fascinating. They both had long grey hair worn in a roll or knot at the nape of their necks. Their dresses were always in the same style – long sleeved, shirt waisted dresses with a belt, buttoned up the front to a collar, usually in a floral print. They wore a hat when they went out and their shoes were black court shoes with a medium heel. They had a treadle sewing machine and all their dresses were made on this machine.

They went to bed at midnight, rose at 8am and had breakfast at 9am. Dinner (as they called lunch) was the main meal at midday and was always a big meal of meat and vegetables followed by sweets and a cup of tea. On Friday there was always fish of some kind. We tried to avoid going to their place on Fridays because the fish was often smoked haddock in white sauce which we didn’t like at all. The evening meal was at 6pm. Afternoon tea was always served at 3pm and there were plenty of biscuits and cakes for the table because this was the time that relatives and friends visited. Supper was at 11pm or later. They were the first people we knew to have a television set in the 1950s. When my sister and I stayed with them during school holidays we were allowed to stay up and watch until the end of transmission and then go out to the dining room for supper. The table was always set and cups of tea and cakes and biscuits were put out.

Nellie did the sewing and Nancy was the gardener. They shared all the other chores. However, Nellie did most of the baking. If you happened to call in during the morning before lunch Nellie would be in the kitchen wearing an apron and mixing up a cake or biscuit batter. She was always trying out new recipes but often had cooking disappointments. Once she made a “flyaway sponge” so called because of the intended lightness of the cake. However, when Nellie went to the oven to check on it the batter had splattered all over the inside of the oven. They thought this was hilarious and told the story many times over. Caraway seed cake was a specialty but not enjoyed by me and my brothers and sisters. We did not like the scratchiness of the carraway seeds. We thought it looked like cake with grass seeds in it.

They were Catholic and came from a strong Irish Catholic background but did not seem particularly religious to me. My parents and grandparents were very devout, and I had a strict religious upbringing, but Nellie and Nancy did not seem to have taken on the harshness of those times. Of course, they adhered to the rules of Mass on Sundays and Feast Days. They abstained from eating meat on Fridays but did not say grace before meals or have sacred pictures hanging in the house. They always sat in the very back pew in the Lismore Cathedral so that they could get out and away very quickly after Mass. If we happened to attend the same Mass on Sunday, we were delighted to see them but could never sit with them because my parent’s habit was to take us to a pew in the very front of the Church. We hoped we would catch up with them after Mass but they were always a long way up the street before we were out of the Church.

Nellie and Nancy were aunts to seven nephews who each had their own families. They were dearly loved by these families too and they all have their own memories and stories to tell.

Even though we had loving parents and grandparents, our lives were richer because of Nellie and Nancy. They introduced interesting people and stories into our lives and broadened our view of the world. The main thing, however, was that they were kind and they loved us for who we were and because we were family.