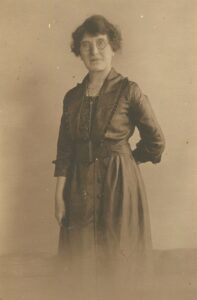 Meet the culprit…the source of so much angst and hours of trolling, delving up hill and down dale through mountains of paperwork and never-ending websites. Searching… searching… and more searching. Sleepless nights of wondering… just where did my Maggie go?

Come on Aunt, show yourself… you know… the ‘real’ you. The tricky, cheeky, and suddenly evaporated Margaret Waters. The elusive entity, crossed between the wonderful family loving young woman and femme de frustration.

A Croake to a Keogh!

Now, meet John, her brother… a man of no bewilderment whatsoever. A man about his business with little idea that upon the very baptismal document which I would rely on, to prove him to be my great, great grand uncle. I believe this document had been foiled by the uncanny Rev. J.P. Meagher, probably an unassuming sort of fellow, and for whatever the reason; overworked, underpaid, he had incorrectly recorded the name of John’s mother as Bridget Keogh and not the goodly Bridget Croake as it should have been. All else but the mother’s name concurred.

A Clue… from a cousin, who intimated that Maggie had gone to United States of America. Many months later…such excitement! A DNA match to a 4th– 6th cousin from America, with someone called John Charles Watters in his tree.

Perhaps he knows what happened to my Maggie?  I wrote introducing myself and my Waters family and suggesting this was our connection, but alas he responded, “DNA match may be mistaken.” Oh No! DNA doesn’t lie… or so I believe. So, I decided to re-build his family tree taking it back further to see where it inter-connected and found that point.

I wrote back that I was happy to let him know that we are definitely cousins, and that the DNA doesn’t lie, explaining our full connection earlier on in his family tree.

My letter in part:
Charles John Watters (husband of Helen Kelly) had parents who were John Watters & Annie Brennan who immigrated from Ireland about 1888 and lived in New York.[i] And that this John Watters b. 1860 d. 1928 Glen Falls USA, had the following siblings…

Maggie’s story: Maggie had arrived in Queensland from London on the 17 August 1888 aboard the Taroba as a remittance passenger. Her brother John emigrated to U.S. also in 1888. Perhaps this marks the date that both their parents were deceased and ties to Kilkenny were diminishing. Both of Maggie’s sisters, Mary, and Bridget, had immigrated to Australia by 1880 and were settled into married life and parenthood.

Maggie’s oldest sister, Mary, died on 20 March 1887 of tuberculosis.[ii] This left her husband, Michael Ryan with 5 children under 10 to raise. Maggie did not get to see her eldest sister before she died. This left Bridget now married to William Butler (the two husbands being best friends were married to the two Waters sisters). It is family here-say, that Maggie was a great support in assisting to raise the Ryan children.

Bridget Butler was Maggie’s closest relative in Australia and when she passed away on 7 February 1910, Maggie must have wondered just where her life would lead. She would have written to her brother in New York to advise him of Bridget’s death. Maggie decided to travel to New York to be with her brother, John, and his family. Maggie had been working as a nurse at the Goodna Mental Hospital.[iv]

The journey from Brisbane to Sydney was probably by a local steamer or train and no record can be found. However, Maggie boarded the fully booked American mail steamer, the S. S. Sonoma, from Sydney on Saturday, 4 April 1914; arriving in San Francisco on 23 April, via Samoa and Honolulu.[iv] Quite an adventure for a woman who had spent the last 26 years in the small country town of Ipswich, Queensland, surrounded by family and loved ones. I can imagine the mix of emotions, sadness at saying goodbye to all she has known, tempered by nervous excitement of the adventure ahead. The journey, a means to an end. The anticipated, familiar warm cloak of family would conquer any fears. Time had marched on, how they both would have changed! San Francisco to New York would most probably have been by train. The entire journey would have taken about a month. 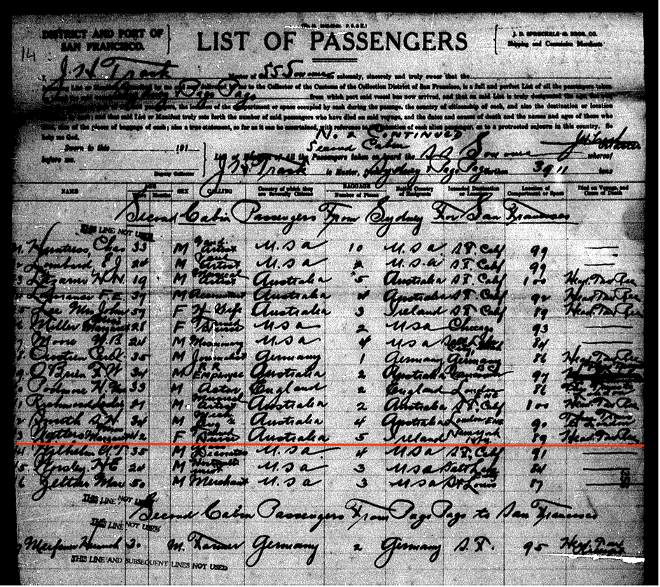 In 1920 Maggie can be located residing with her brother, John and niece Elizabeth at Moreau, Saratoga, New York.[v]

Maggie’s brother, John, died on 24 September 1928 and Maggie and her niece Elizabeth appear on the 1930 U.S. Census residing at 7 River Street, South Glen Falls, Saratoga, New York. Her occupation is listed as Domestic Nurse and she is still employed.[vi] 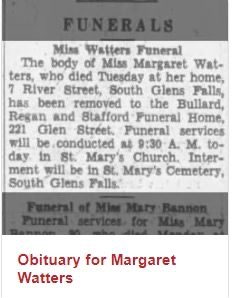 The story ends on the 12 October 1937 when my once elusive Maggie passes away at her home. She was laid to rest in St Mary’s Cemetery, South Glens Falls, Saratoga, New York along with John and her nieces and nephews… her family.[vii]