What’s in a name?

In my quest to track down ancestors, I have always concentrated on using the last name as a searching term. I never thought the first name would be useful. However, because first names are often passed down through generation after generation, I have discovered that they may provide a clue to finding missing ancestors, particularly if you have come to a dead end.

For years I have struggled to find any records of my Bell ancestors who lived in Ireland before coming to New South Wales. My 3x great grandfather, Thomas Bell’s, death certificate records that he was born in 1798 in Kilcullen, County Kildare. Consequently, on travelling to Ireland in 2012, we commenced our investigations at the closest local history centre to Kilcullen which was at Newbridge. There were no baptism, marriage, or birth records. The local historians advised us that based on the first names of the Bells’ children (Mary Isabella, Joshua, John, Marmaduke and Sarah), the family was probably Church of Ireland (Anglican).  Several people have checked the Kilcullen Church of Ireland registers on site for me and have found nothing. There is some digital coverage of records for Kilcullen Parish at RootsIreland.ie but once again nothing.

While at Newbridge, the local historians found a number of records for a Marmaduke Bell in the Kilcullen area. Because Marmaduke was an uncommon name, and at least three subsequent relatives had that name, they thought there was a good chance that this Marmaduke Bell was probably related to Thomas Bell.

The earliest record, from 1759, mentioned a Marmaduke Bell, who was deputy ranger of the Curragh Racecourse (near Kilcullen).  He also had a bay mare (by Viper) which raced at the April 1767 Curragh races and a chestnut mare (by Sejanus) at the April 1777 meet. The Carlisle Journal (Cumbria, England) announced his death in 1802, claiming that he had died at the ripe old age of 108 and that he had been deputy ranger for 50 years! The article also reported that he was born at Northallerton, North Yorkshire and rode a horse at the York Races in 1714. If he was an ancestor of our family, we now know the family may have come originally from Yorkshire. An interesting note to this is that the deputy ranger after Marmaduke was a William Bell ‘a Curragh innkeeper’.[1] 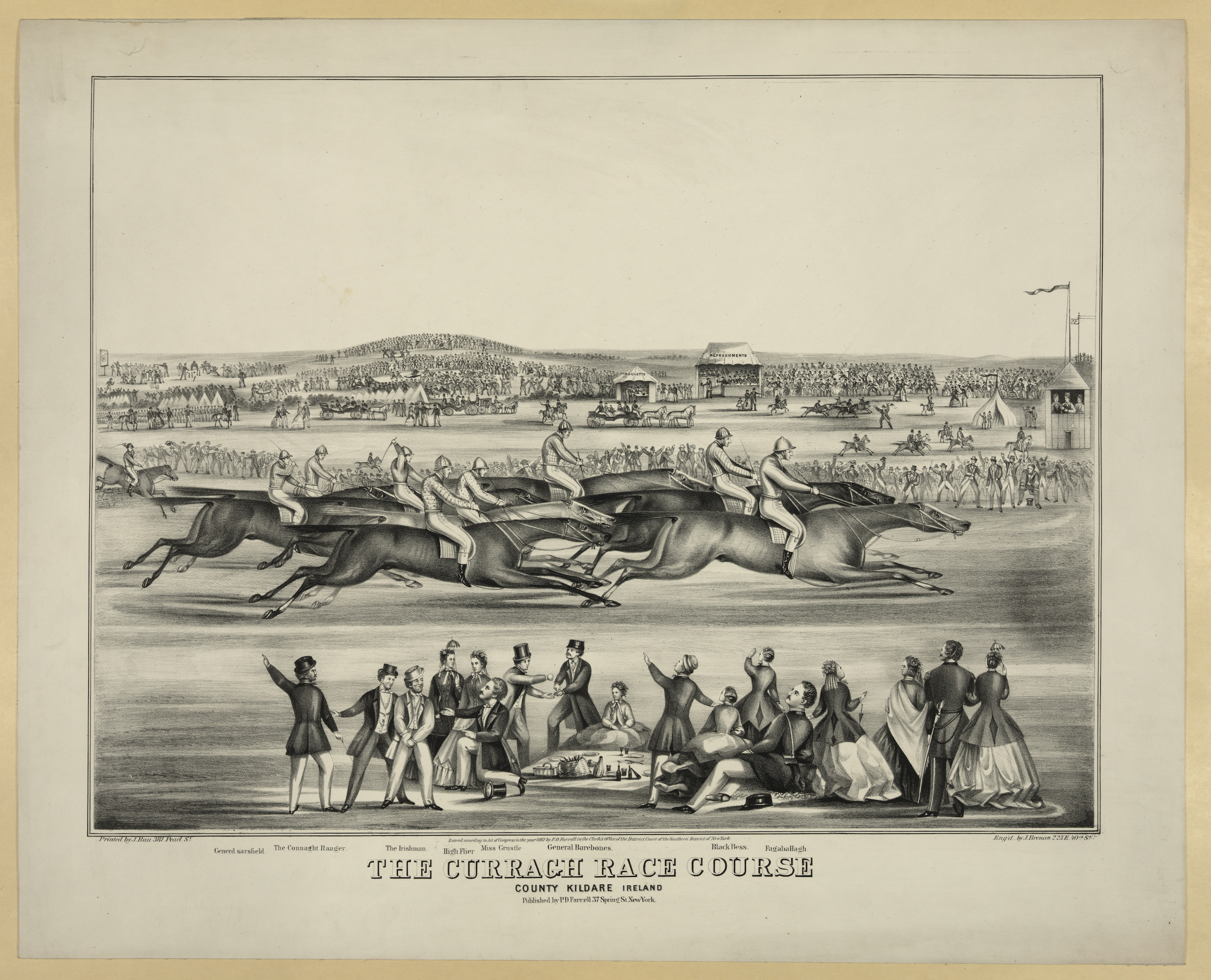 The next record is of a Marmaduke Bell (which may have been the Marmaduke from the Curragh) who sought compensation after the 1798 Rebellion. One of the first engagements of the Irish Rebellion, against British rule, was the Battle of Kilcullen which took place on 24 May 1798.

The third record was a Marmaduke Bell who was as a medical attendant at the fever hospital and dispensary at Kilcullen in 1846.  He was listed as a certified practitioner, S.L.C  ( Surgeon London College).  The Freeman’s Journal recorded the death ‘At Rathangan, Mamaduke Bell, Esq, M.D., of Kilcullen, county Kildare.’ Perhaps this Marmaduke Bell may have been a grandson of the Deputy Ranger.[2]

My 3x great grandfather and grandmother, Sarah and Thomas Bell, left Ireland and arrived in NSW in 1832. Their three sons, Joshua, John and Marmaduke, all called one of their sons Marmaduke, or used it as a second name. All these Marmadukes had, what you could call, colourful lives particularly Sarah and Thomas’s son, Marmaduke.

This Marmaduke was born in 1829 in Borris-in-Ossory in County Laois, Ireland, in July 1829. After receiving his early education in Sydney, he attended St Augustine’s College, Canterbury, and then Sidney Sussex College at the University of Cambridge, England. He was ordained a deacon in December 1852 by the Archbishop of York and in 1853, became curate at Kirbymooreside, North Yorkshire.[3]

However, he seems to have moved around continually. In 1866, he was in Australia exhibiting New Orleans cotton at the Queensland Exhibition. Four years later the was on the island of Guernsey peddling Australian meat cured by the Manning process.

The Brisbane Courier even claimed that Marmaduke had ‘a very satisfactory interview with the French Emperor [Napoleon III)], by who the Manning meat was highly approved.’ This was just before the Franco-Prussian war and four months before Napoleon was deposed so this seems highly improbable![4]

In 1879, Marmaduke married a German lady called Agnes (Agnes St Leger/Ledger Bell) and they had a son, Marmaduke Charles Alexander Bell. The marriage was not a happy one. In 1883, an article in the Gloucester Citizen entitled ‘A Stroud Romance’, reported that ‘Madame Bell’ had disappeared. She had been living at Rodborough Fort, near Stroud, Gloucestershire which Marmaduke had recently bought. This Fort had been built as a folly in 1761 and enlarged with the construction of house in 1870.

The article claimed Agnes had ‘wandered’ to Liverpool and taken a ship for America and ended up in Minnesota. She was teaching French and Italian and also sang and played the piano and was seeking an engagement to sing. To this end, she was persuaded to enter a beauty contest, being staged at Bunnell’s Museum, where she won the prize for the ‘handsomest figure’! She claimed she had left her husband on the grounds of cruelty. Marmaduke, ‘ a tall, sturdy, representative Englishman’ appeared during the contest to take her back explaining that ‘she was an invalid … I sent her to this country in September and followed later myself. She has been investigating American society, and will probably write a book of her experiences.’[5]

Their troubles did not end there. On their return, they lived in Kinvara, county Galway for a few years and then in Bangor in Wales where, perhaps, Marmaduke had a job as a curate. Agnes left him again and went to live in Dublin where, from August 1890 to March 1892, she forged cheques for goods bought from Bewley and Co. in Dublin. These were not discovered until sometime after the event and Marmaduke was charged; Agnes had left for America again. Marmaduke’s defence was that he had found pieces of paper on which his wife was imitating his signature and that he had no relations with his wife during the period she forged the cheques. He denied all liability. The Solicitor-General acting for Marmaduke claimed that Mr Bell was a man to be pitied and explained the situation:

Mr Bell was a man to pitied. Happy was the man who had not to regret matrimonial experience (laughter)… it was a terrible thing to be linked to a woman like that; it was a terrible thing to have on their hearth and in their home a traitress. It seldom happened in this country he was happy to say. They might be vain or foolish, but Irish women were generally a model of loyalty and truth, and of devotion to their husbands and families.[6]

The jury found for the defendant, Marmaduke.

Marmaduke died at Rodborough Fort at 71. He was described as:

… rather eccentric in his habits and was almost a recluse, was of Irish extraction and originally a circus proprietor…He took up his residence there [the Fort], after a prolonged absence about twelve months ago, and had been ailing for some time…Mr Bell was a man of huge proportions, being about six feet inches in height. He twice entered the matrimonial state.[7]

Because of a world limit, I have only been able to provide a snapshot of the extraordinary tale of one Marmaduke. I have discovered many other tales of the Marmadukes in my research (See my blog on another Marmaduke: ), some of which are amusing but also often having a dark side to them.