Many moons ago I tentatively knocked on the door of Ian Irvine, a second cousin of my dad’s. The door opened with a welcome and I fought back a lump in my throat, as gentle speaking Ian reminded me so much of my deceased father. Ian was my introduction to many in this family and I dedicate this story to now deceased Ian, Lex and Amelia; grandchildren of Hugh Irvine. I am grateful I spent many hours with them in the 1990s, making such a tangible link to the original emigrants.

My branch of the Irvine family split began almost a century prior when my grandfather’s parents, Harriet and Robert Irvine went their separate ways. From family memories I understood my Grandpa Irvine did not get along with his father so I doubt my Dad ever met his grandfather, nor his Irvine cousins, although we did know the Wynnum family were related and that they ran a department store. H.A. Irvine & Sons was known to all and sundry who lived in the Brisbane bayside suburb and surrounds. It was an icon, like some of the other family department stores of that era in our Brisbane suburbs; Bayards and Barry & Roberts spring to mind. Sadly, they and their marvelous personal service and welcoming smiles are now part of our wider community history. This is a tale of the beginnings of one such store – the vision of Hugh Irvine, a boot-maker by trade and one of the eleven Killyleagh siblings.

Hugh was the tenth and second last child of James & Sarah Irvine and just three days old when his parents took him along to the 1st Killyleagh Presbyterian Church to be baptised on 15 April 1857, naming him Hugh Ackin (Aitken) Irvine after his uncle, Hugh Aiken.[1]

At the age of twenty-five, Hugh sailed as a ‘Remittance’ passenger on the vessel Roma which departed England on 27 September 1882. [2]&[3] Also with him was his sister Mary, her husband, Clement Parkinson, his nephew John Irvine Parkinson and twin nieces Eliza & Sarah Parkinson. Sadly, one year old Sarah died on the voyage. Also in the group was Clement’s sister Mary Parkinson, who became Hugh’s wife three years later. The family party had left Ireland on 18 September 1882 and made their way to Plymouth, where they boarded the vessel Roma which sailed on 27 September landing in Brisbane on 25 November 1882. 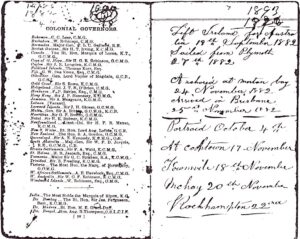 Hugh kept a journey diary where he records his expenses from just prior to leaving and after the journey. The vessel called at Port Said, Thursday Island, Cooktown, Townsville, Bowen, Mackay and Rockhampton. His older brother Robert Gilmore Irvine and his family lived in Cooktown then as Robert was stationed in the Queensland Police station. I imagine they would have seen each other for the first time since Robert left Killyleagh 8 years before.

Two months later and settling in to Queensland life, Hugh joined the Queensland Police Force on Wednesday 24 January 1883 whilst in Warwick, but quickly came to the decision that the life did not suit him, as he resigned on the following Tuesday, 30 January 1883! Not one to be idle, in February Hugh joined Mary & Clement Parkinson on a new farm at Dalveen, some 15 miles south of Warwick.  There he joined them in the hard manual labour involved in ‘scrubbing’ – clearing the dense bush to prepare the land for farming. 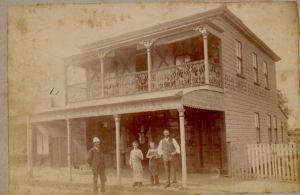 After settling into life in the new country Hugh married his brother-in-law’s sister, Mary Parkinson on 28 August 1885.[4] Their first child, Sarah Margaret Irvine was born on 7 June 1886 and was to be Hugh’s only daughter, and a very special person in his life.[5] Two years later Mary gave birth to twins Samuel (known as “Sam”) and William on 11 May 1888.[6] Hugh’s wife Mary died some two weeks later on 24 May 1888 leaving Hugh with a small daughter and baby sons to raise.[7]  With his Bulimba Boot Warehouse in business just beginning, two of Hugh’s sisters Mary (Irvine) Parkinson and Margaret (Irvine) Carothers took over the rearing of the small children.[8]

Tragedy struck again when William died aged just four months on 19 September 1888. In these sad times confusion arose in the details supplied to the funeral director.  The deceased twin was incorrectly recorded in the death records as being Samuel Hislop Irvine, and Toowong cemetery records show Samuel being buried on 19 September 1888 alongside his mother.[9]  These records should have shown William James Alexander Irvine, as Samuel survived until he was 80 years.[10] 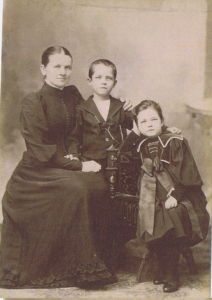 Hugh was to become one of the most successful businessmen in this family of many shopkeepers. Aldine History of Queensland published in 1888 records “This business was established about 2 years ago by Mr. H. A. Irvine, a native of County Down Ireland, who came to Queensland about 7 years ago.  This is the leading house of its kind in this suburb, and the business done is principally the making, repairing and selling of boots and shoes.” The shop was listed at Ferry Road, Bulimba, which was later re-named Oxford Street, Bulimba. In the 1900 directory Hugh is listed as a Boot Importer and Draper. However, following a severe flood, the business was moved to the Wynnum area shortly after where Hugh set up as a department store under the name of “Commonwealth Store” in Bay Terrace.

The family has correspondence from Hugh to his young son, Samuel, stating that it is hoped that he can come to live with him soon. This letter was written just prior to Hugh’s second marriage on 26 February 1892 when he married Amelia Jane Watt.[11] Amelia bore a son to Hugh on 16 January 1893 whom they named Hugh Albert Irvine, known throughout his life as Bert.[12]

Hugh took his sons into partnership and changed the store name to H. A. Irvine & Sons about 1914 and by 1920 the store was extended to take up the full block of Bay Terrace to Charlotte Street. Hugh’s granddaughter, Millie confirmed that prior to this there was a Post Office next door to the Irvine store on the corner of Bay Terrace and Bride Street.[13] 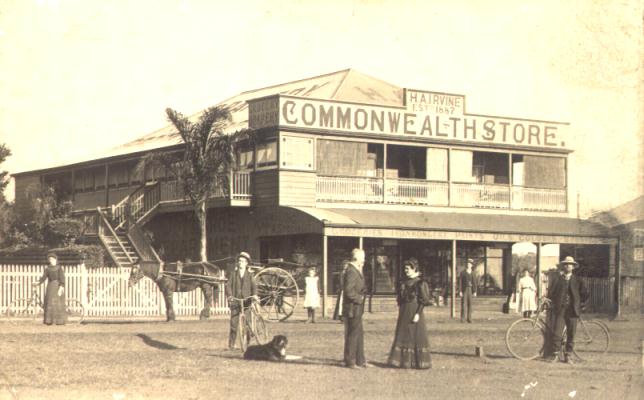 Commonwealth Store with staff outside about 1910. Photo in Irvine family collection.

During the depression the Irvines store supported many local families in difficulty. About this time Hugh and Sarah’s father-in-law, Mr. Payne, began the first Open Brethren Assembly in Wynnum.  It started out in the dining room above the shop and when numbers got too big for that room, they moved several times before finally owning their own hall in Clara Street Wynnum.  By then many in the family were followers of the Open Brethren religion and indeed it was the main beneficiary in my great-grandfather Robert Irvine’s Will.

From the time of moving to Wynnum, Hugh lived above the shop and when his son, Bert, married, he and his wife lived above the shop as well.  The residence lent itself to being divided into two flats quite easily, with the elder Irvines living on the left and the younger Irvines living on the right.  The extended family, with sons Sam, Bert, daughter Sarah, and all the children got together from time to time for dinners and family outings. 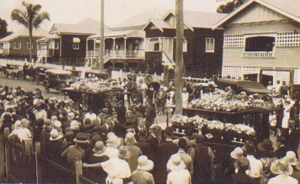 Amelia passed away on 24 May 1921 aged 53 years and is buried with Hugh and his first wife, Mary and son William at Toowong Cemetery.[14] Four years later Hugh married for the third time in 1925, to Flora Mary Hadlow (nee Jones), who at that time was 52 years old.[15] Hugh died on 31 August 1941 aged 84 years and is buried at Toowong Cemetery with his first two wives along with his twin son William.[16]&[17] Flora survived Hugh by some fifteen years, passing away on 21 April 1956, and is buried in Toowong Cemetery with her family. When Hugh retired, his sons Bert and Sam carried on the Wynnum store until their ill health forced the sale of the Wynnum business in 1966 signifying the end of an era in the commercial heart of Wynnum.