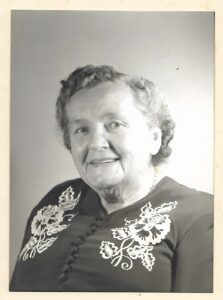 My late mother in law often spoke fondly of her Grandma Daley who she loved and greatly admired. In researching her life, I soon came to realise that she had faced many challenges, heartache and tragedy during her life.

Lilian Tregenza Delve was born 11 May 1879 in St Johns Wood, Middlesex, England to John Hockridge Delve and his second wife Jane Downing Tregenza.1 Joy turned to tragedy when Jane died just 9 days later. Within a year, her father married Jane Chope Clevedon in Bideford, Devon.  I have been told that Jane was not keen to raise Lilian and she was left with a family in Devon when John and Jane returned to London where they ran a coffee house. This does seem to have been the case. Lilian does not appear in the 1881 Census with John and Jane, though John’s children from his first marriage do. A Lilian Delve, born in St Johns Wood, Middlesex appears in the 1881 Census as a “boarder” aged 1 with a family in Bideford. Lilian is again with her father in 1891.2

A search for “Lilian Tregenza Delve” in the British Newspaper Archive at GSQ revealed more about Lilian, and it was something I really hadn’t expected! In September 1894, at the age of 15, a pregnant Lilian had married by licence, schoolmaster Sidney Deane in Barnstaple. Her father, a witness to the marriage, may or may not have been aware that Sidney was in fact 43 rather than 23 as recorded? Either way, it’s unlikely he knew that Sidney had a wife and 7 children in Sheffield where he was known as Samuel! A charge of bigamy was proven in the Sussex Assizes in June 1896 and he was sentenced to 12 months hard labour.3 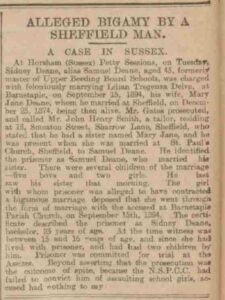 Lilian and Sidney had two children during their marriage, GRO showing an unnamed female (1895 1st Qtr) and Violet May (1896 2nd Qtr). A search to discover their fate has not been entirely successful. GRO lists a Violet Deane died in Marylebone in 1896 aged 0. I suspect this may be Lilian’s daughter, taken back to London by her father.

We next find Lilian in Kalgoorlie where she married Irish immigrant Henry (Harry) Francis O’Driscoll in 1898 at age 20.4 I’ve been told by family members Lilian was sent to Australia to work for the Bishop of Perth. Is this just family folklore, or did this claim have substance? I can find neither proof of this nor her immigration record so this remains a mystery. 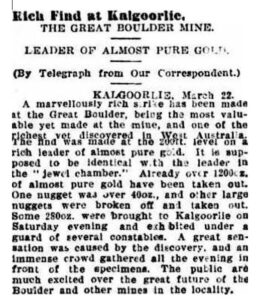 Gold had been discovered in Boulder-Kalgoorlie in the 1890s, and newspaper articles across the country told of the rich finds in the area. Australia was experiencing a depression at the time and thousands of men flocked to the goldfields. Henry had made his way to the Boulder to try his luck sometime after the deaths of his first wife, Eliza, and one of his young sons in Brisbane in 1893, leaving his other son to be raised by Eliza’s parents. He made enough money from his finds to pay for passage to see his mother and siblings in Ireland, arriving in London in June 1896. It was apparently on the return journey to Australia that he met Lilian who then travelled to the goldfields with him.

Life was harsh on the goldfields, and would certainly have been a stark contrast to the lush countryside of Devon that Lilian remembered.  For Lilian, home would have been very basic initially: a tent or possibly an iron roofed hessian hut. There were swarms of flies to contend with, stifling heat, bone numbing cold, and a never-ending supply of sand and dust coating everything. Much of the food arrived in tins from Perth and cartage was expensive. Supplies of women’s clothing and shoes were sparse.5

Initially the supply of fresh water was reliant on unpredictable rainfall or carted by camel. Typhoid and diphtheria outbreaks resulted from poor sanitation. It wasn’t until 1903 that water was piped the 530k from Perth to the Kalgoorlie goldfields. This must have seemed like liquid gold to the mining families.

Deaths of Henry and Lilian’s Children

However, it seems Lilian was made of tough stuff and bore the hardships with stoicism and determination.

When gold was discovered in the Bullfinch area in 1910, some 200km from Kalgoorlie, Henry took out a mining lease there, leaving Lilian alone to look after their family for long periods. By this time the family lived in a still fairly basic but more substantial dwelling in North Terrace. An account of a physical confrontation between Lilian and a male neighbour one evening while Henry was away, points to the strong character of Lilian “Mrs O’Driscoll seemed to be able to take care of herself”; she was no shrinking violet.8

At the outbreak of WWI, son Francis (Frank) enlisted and in January 1917 at the age of 49, Henry felt the need to enlist also. Lilian was said to be against the idea but said “if you are for it, then you should go”. He was sent overseas to serve in the 2nd Pioneers Battalion. Henry was discharged the following year suffering severe bronchitis and thankfully Francis also returned, though he’d been wounded during his service in France.9 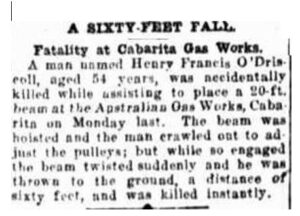 After Henry’s return, the family decided to move to Sydney. Henry secured work at the Gasworks at Mortlake and they moved into a home in Waine St Cabarita. All was not smooth sailing though as tragedy struck in 1922 when Henry was killed in a fall from a 60ft height as he was securing pipes at the gasworks. He died of a fractured skull.

Three years later, in 1925, Lilian remarried. At 45, she married divorcee Michael Daley and the following year, daughter Aileen was born.10 Sadly, this marriage was short lived as Michael died in 1927 of pleurisy and pneumonia.

I’ve corresponded with several family members who remember Lilian and without exception their recollections are of a strong, determined woman who “didn’t stand any nonsense” but who was very warm and loving to her family. As I’ve researched Lilian’s life, I’ve come to understand that despite the many challenges she faced, she showed amazing resilience, well deserving of the respect she received.

Correspondence with members of the O’Driscoll family.