Have you ever wondered what it would have been like if all our Australian and colonial census returns had been preserved? I confess I hadn’t anguished over this during my research, on the premise of what you don’t have, you can’t mourn. However, last year, my mate Alex from Family Tree Frog blog wrote her own notes (here and here) on her life across twelve censuses, drawing on inspiration from English blogger and family historian, Janet Few.

Reflecting on their comments brought home to me that official records will obscure a significant part of my life – another reason to hope that because this blog is being preserved in Pandora with the National Library of Australia, there is some hope that descendants may be able to plug some of the gaps. 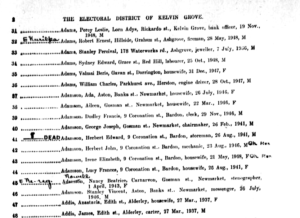 A couple of key records help to bring our Australian stories together. They are electoral rolls and our BDM certificates.

Electoral rolls do have limitations as well as benefits:

Our Birth, Marriage and Death certificates are second to none in my opinion. Although Scottish records give us a close run for our money, the additional information on “when arrived” can be invaluable. Of course, as always, information given is subject to the knowledge and inclination of the informant, but that is a research fact of life.

What gaps would there be for my own census data? Sadly, without the originals, all I can do is compare the statistical data for the area with my own, known information. I may have copied a couple of census returns (but can I find them?) and I know we’ve indicated that we want our records preserved ever since this has been possible. There are some blank forms online for 1971 and 1981 so I should really print them off and complete them as best I can with an annotation explaining where we were. 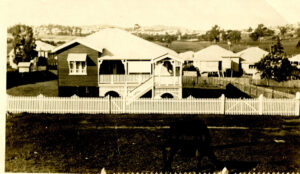 Perhaps I’m lucky that my family of origin and my grandparents, who were our neighbours, had a very static residence for decades. This means I know the structure of the houses and how many rooms. I know our house was serviced by gas and electricity, that we had no fans or air conditioning, and heating was a couple of bar heaters if required. My grandparents had tank water but we did not. Both houses were sewered because our suburb was one of the earlier ones to lose the backyard dunny c1941. Both houses were high-set wooden houses but my grandparents house was larger with three large bedrooms while ours had two.

My grandparents had a car when dad was young, but I don’t know when they sold it. We didn’t own a car until 1969 and dad rode a push bike to work, hail, rain or shine. Mum and I caught the bus to shopping and, in my case, to school and uni. Usually, the bus from near home was a trolley bus. We would catch a tram from Woolloongabba if visiting my maternal grandfather’s house at Buranda. As my primary school, and church, was close by, I walked whatever the weather. We did a lot of walking in those days which is possibly why I prefer the car these days <smile>.

I really wish I knew how much education my grandfathers had stated on their census forms as they were brought up mainly in railway camps. I suspect my paternal grandfather missed a lot because of being moved around and this is implied on school enrolment records. 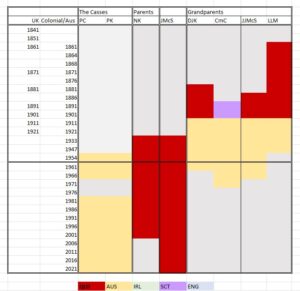 Residence of parents and grandparents through the years.

Migration changes were evident to me as a child with a large influx of port-war migrants to our suburb, many of whom were Displaced Persons or DPs. Our Catholic school had a wide variety of nationalities, so much so we even had Dutch priests. Similarly in the 90s, the South East Asian migration was evident in our Southside suburb and evidenced in the reported data on Chinese languages being used by many at home.

I am confident of what religion would have been entered for Mum and me, and her father but I’m not certain about dad or his parents.

Employment categories are difficult to guess on either census or electoral roll, when the options are railway employee, guard, carpenter, public servant etc. Even Mr Cass’s employment category on the 1980 electoral roll is a very vague “admin officer” which understated his job at the time.

We always had a radio that I recall, but we were not among the early ones to get television in our area, or indeed a house phone. I don’t think this was unusual in our neighbourhood. I notice that in 2016, there was a question about internet connection which we’ve had in various standards for many years.

Both Alex and Janet suggested that pets should have been included on census returns, and it’s true they’ve always been a big part of my family life. I can’t remember a time when we didn’t have cats as a child and only a few months as an adult.

MISSING IN THE RECORDS

Even without nominal data, there is a chunk of my life that will be missing from census data and researchers will wonder why I don’t appear on electoral rolls until 1980. Will they assume I’d undertaken the ritual working holiday in the UK? That will be guaranteed to confuse them! 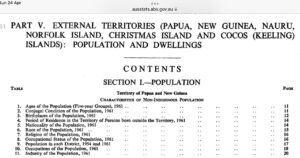 The last census on which I’d have been included was 1966 as I was finishing high school. There’ll be no statistical record of my attendance at university or my part-time work. Nor will I appear in the 1971 data, even though I’d spent a couple of months that year at my parents’ while awaiting the birth of our first child. 1977 will also be a blank. Where did I get to? In fact, Mr Cass and our little family were living in Papua New Guinea where he’d grown up.

Which raises other interesting points. Reading through the historical census data information, expats in the Territory of PNG as it was then, were enumerated in the Australian census in 1954, not long after his family had arrived. I’ve some exploring to do around that. I’m also curious about how boarding schools reported their students’ birthplaces, parents, and usual place of residence. This affects Mr Cass’s enumeration in a couple of censuses.

Without nominal data, one daughter’s birth in PNG will be missed except as a statistical detail when she appears as one of 23 females born in Oceania living in our Brisbane suburb in 1981.

Population of males 1861 census Q’ld with 3 of my ancestors’ origins highlighted.

As with those lost Irish census records, we can still use the statistical data to see how typical our ancestors were in the time and place where they lived, especially if they’re obliging enough to be in a defined town at the right time. I had a play with the census dates and known ages of ancestors to put together some idea of where I can look for census data and comparisons for them. Examples might include how many Germans were in the area where my 2xgreat grandfather lived, was his Irish wife partly illiterate and how common was that, how many others followed similar occupations, how many had parents born overseas.

Alex mentioned the social mapping available for the 2016 census which is pretty, and generally more interesting, but I miss the detailed statistics as well. If you’re a born and bred Brisbane person you won’t be too surprised by some of the clustering, good or not so good. I also had a play with the data for our Darwin suburb in 2011 and found we were very typical on most of the data. Having worked  in a centre with academic researchers using census data, I rather wished I’d been more annoying and asked questions.

I hope that you have been encouraged to explore your own places and data, and more importantly record some of your own memories so your family is not just a number in the stats. We’re pretty good at searching into the distant past, but tend to forget that for future generations we are the ancestors.

Meanwhile, have fun, I’m back down a very deep rabbit hole exploring data.

Electoral rolls can be searched on the big pay-to-view genealogy sites.