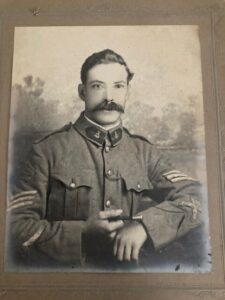 Is this Alfred Edward Caller?

For some time now I’ve had a photo of a man in a military style uniform in my possession. It was passed to me by my mother when she moved house as she knew of my interest in our family’s history. The photo was originally found in my Nan’s wardrobe after she passed away in 2004. The simple frame was barely holding together, there were no markings or inscriptions on the photo itself to indicate who this gentleman was, or clues as to when it was taken. I assumed it was a picture of my great grandfather Alfred Edward Caller, Nan’s father.

Born 5 August 1877 to orchardist William Caller and Elizabeth Bantick, at Gladesville Rd Ryde, Alfred was the 4th of 6 sons. He and his brothers William, John, James, Charles and Frederick grew up amid market gardens, orchards and poultry farms. Produce was transported to Sydney via the nearby Parramatta River.

I decided to try and establish if it could be Alfred in the photo and at the same time learn something about him.

Firstly, I contacted the Australian War Memorial in Canberra to enquire about the identity of the uniform. In his response Steve Blanch, Assistant Curator of Miliary Heraldry and Technology, informed me that it was a Commonwealth pattern uniform produced around 1903 and that the collar badge of the stag identified the wearer as a member of the 1st Australian Infantry Regiment of NSW which was in existence from around the time of Federation in 1901 until about 1912. The badge with the crossed rifles on the left sleeve indicated a marksman qualification and the stripe on the other was likely for good conduct. The three stripes indicate sergeant rank.

The regiment was a militia force, an army of non-professional soldiers trained to perform military service in time of need as opposed to a professional force of full-time military personnel. 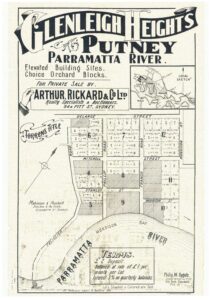 In the 1870s to 1890s a site at Gladesville had been set aside for civil militia purposes. The site consisted of a tented area, a parade ground and an adjacent small bore rifle range. The first militia force making use of this facility was K Company, 1st Infantry Regiment and a permanent drill hall was built. In July 1894, the Cumberland Mercury described the gaiety of a grand concert to open the newly built Drill Hall. There were numerous items to entertain the attendees, including performances by the Ryde Brass Band, songs and recitations by Company members.   Drill Hall Captain Weeks, presided at the celebrations. While inviting the Ryde band to use the facility when not required by the company, he stressed that the members of the company were expected to “muster as strong” for lectures etc on military subjects and his expectation was that the K Company 1st Infantry Regiment would be second to none.1

Could I now connect Alfred to the 1st Regiment? My answer came while searching Trove.

I first found mention of Alfred in December 1898. It was reported that Pt. A E Caller had completed the Regiment’s K Company musketry training for the year 1898 – 9 using the superior new Lee-Enfield rifle, with a commendable score of 151 points. His brothers Pt. J Caller and Pt. C Caller were also mentioned.2

In 1902, Alfred was noted as part of a committee who organised a welcome home concert for Captain Tilney and other members of K Company who had returned from service in South Africa during the Boer War.3

By 1907 Alfred had risen through the ranks. In a friendly rifle shooting match between the Gladesville Company, now known a F Company, 1st A.I.R and the visiting Drummoyne H Company, Sergeant A E Caller had again performed well, as had his brother L. Corporal C Caller.4

So, Alfred was definitely a member of the 1st Australian Infantry Regiment. 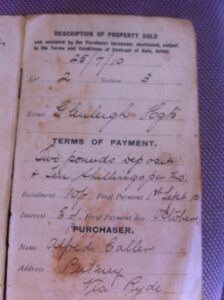 On 2nd January 1909, Alfred married Edith Matilda Bulmer at the Whitefield Congregational Church in Sydney. The following year he paid a £2 deposit on a ½ acre block in Pellisier Road Putney in the newly subdivided “Glenleigh Estate”. He then paid 10 shillings a month with interest set at 5% for his block. The elevated estate of “orchard blocks” fronted the Paramatta River and had easy access to the Putney Wharf, the vehicular punt across the river and the new Ryde Tram.5,6

Mum remembers the modest timber cottage Alfred built on the large block planted with a variety of fruit trees and a large vegetable garden at the rear. She doesn’t remember Alfred himself, he died when she was just 3, however she was often told she used to trail around after him in the garden. I also have memories of the large property which today is divided into several small suburban homesites.

In January 1916, 38 year old Alfred applied to enlist in the in the Australian Imperial Force.6 However, despite his prior military training with the 1st Regiment, Alfred’s application was rejected. He was deemed unfit for service on the basis of his medical examination which revealed that he had defective teeth, 4 vaccination marks on his left arm and a hernia.7 While Alfred may have been disappointed, I imagine Edith was relieved as she had 3 children under 10 at the time and a huge garden to look after. 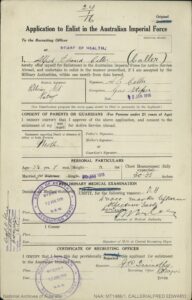 The application also described Alfred as having light blue eyes, a dark complexion, brown hair which is, I think, in keeping with the photo also.

Alfred’s occupation was given as “gas stoker”, “one of a gang of men stationed at the back of the retorts, at a coal gas works, working in conjunction with the machine driver. He opened the retort doors and the doors at the back of the retorts, pushing a hopper into position so that as the coke emerged from the retort. it fell into the hopper and then into the furnace. He poked the coke with an iron rod to quicken its passage into the furnace, shutting the retort doors when the charging and drawing process was complete, he shut the furnace door when the furnace was stoked”.4 It sounds like very hot physical work indeed.8

It seems likely then that Alfred worked at the nearby Mortlake Gas Works opened at Kendall Bay on the Parramatta River by the Australian Gaslight Company in 1886. I don’t know if he continued his work at the gasworks, electoral rolls found on Ancestry invariably describe him as a labourer.

Alfred died on 14 October 1936, and was interred 16th in an unmarked grave adjacent to his parents at Field of Mars Cemetery, East Ryde.

I’m fairly confident that the photo is of Alfred Edward Caller, around the age of 30. He was certainly a member of the 1st Australian Infantry Regiment, and he did gain marksman qualifications, attaining a rank of sergeant.

I hope it is Alfred anyway, as it is the only picture we have.