Who first purchased the land where our families grew up, which, in its homes, streets and suburbs, became the background of their lives? When did this land become part of the suburbs? How do I trace its history? 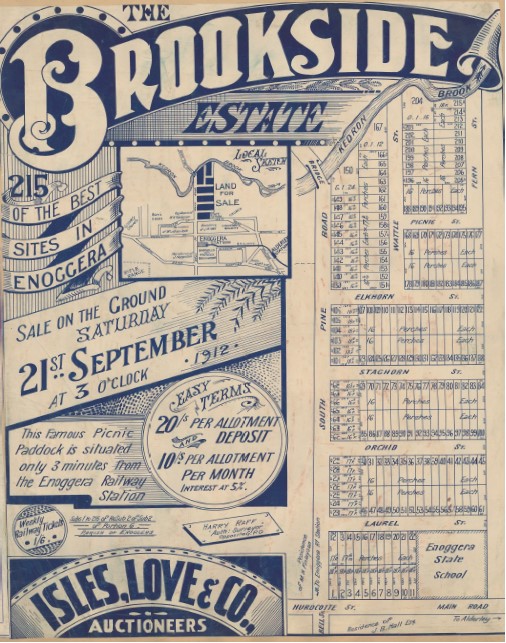 Brookside Estate on sale 21 September 1912 Did your family live in any of these streets?

State Library has hundreds of estate maps showing first sales of residential blocks in Queensland. In this estate map the sketch of the local area puts the streets in context. Cheap, easy transport was a selling point when private transport was rare. Convenience and pleasant surroundings were key attractions.  The estate maps, referred to as lithographs, were supported with newspaper advertising which ran over weeks. 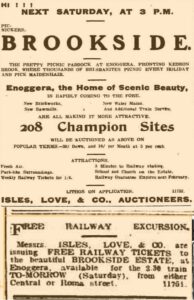 Isles and Love varied advertising, building to a crescendo as the auction approached. They waxed lyrical about ‘fresh air’ and ‘scenic beauty’. They offered incentives to come to the auction. In this instance, it was free railway tickets, for an excursion to ‘the pretty picnic paddock’ where visitors could ‘pick maidenhair.’ On other occasions it might be lunch or even an aerobatic display. A land auction was a free gala event for many!

First land purchases: the deed of grant and origins of the Brookside Estate
To trace the development of land we need to look to the early days of Moreton Bay and Queensland. The history of land in our State is one of land speculation and increasing subdivision. The origins of the Brookside Estate (above) began with Patrick Mooney and his family, free immigrants to Sydney in 1850 on the Cornwall. The NSW Government sent them to Brisbane on a coastal vessel, to develop northern NSW and move them from Sydney, where there was no immediate need for their labour. Patrick Mooney purchased 31 acres of land in the parish of Enoggera, portion 6, in 1850 at £1/acre. He received the deed of grant for that land, the first purchase of land from the Crown. His purchase is indexed online at State Archives and Records of NSW, Colonial Secretary’s Letters relating to Land 1826-1856. The sale record is on SARANSW reel 1164. It shows the title finalisation in November 1851. He had, however, died the previous month. The records of Transmission of Real Estate by Death 1878-1940, also indexed, show this land, portion 6 in the parish of Enoggera, going to his son, James and then to his grandson, William in 1881 in an untimely sequence of deaths. 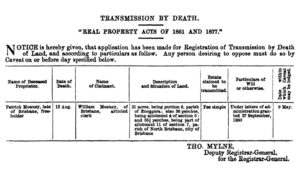 How do I find this land?
Lands Mapping and Surveying is a starting point to check cadastral maps i.e. maps which show boundaries and original owners. Check their guides to historical land research to understand terms and processes to use. Historical parish directory 1987—Queensland—part 1 provides coordinates for finding parishes on a map, in this case, Enoggera. Parishes are listed alphabetically.  Other location indicators include references to the Mooney land’s position on Kedron Brook in the NSW Government Gazette 16 May 1851 p786 and an account of Mooney’s accidental death on the Pine river road in October 1851. The unique identifier of Parish of Enoggera, portion 6, together with the large block of land, 31 acres and the detail provided in these other sources, makes the block easily found on a cadastral map. 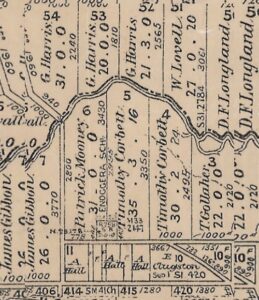 By the time of this map, the Mooney estate and neighbour, Timothy Corbett, had each donated an acre of land for the Enoggera State School, also shown.

After various sales transactions, the land was subdivided for housing blocks in 1912 as Brookside Estate. Most researchers want to find the first purchaser of land and when s/he bought it. Then, when a suburb starts to take shape, researchers are interested in getting a title search. In between those sales, and after suburban subdivision, there are other land owners, but they may not be of interest. In deciding which titles to purchase it is helpful to contact the Museum of Lands Mapping and Surveying before buying certificates of title and subdivision plans from a business centre.

How do I find real estate maps?
Search Real estate maps of Queensland which covers digitised maps which can be downloaded. Use State Library’s catalogue, OneSearch and select advanced search. In the search box put the name of the suburb and ‘estate’. In ‘material type’ select maps and search. Undigitised estate maps will also be listed, but a hidden treasure of hundreds of digitised estate maps is [Estate maps : scrapbooks] Blocksidge & Ferguson. There is an index of contents and 6 volumes of maps. The index is sometimes alphabetical by suburb but often alphabetical by estate name, so the Brookside Estate, Enoggera is found under B, not E for Enoggera. The book and page number are provided in the index but continue a few pages further in the scrapbook as earlier pages, before the maps commence, have been digitised. Therefore, the map for the Brookside Estate is in Book 2, on p177, not 173. 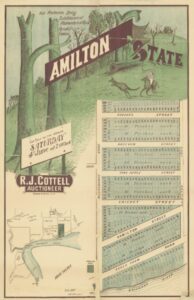 Not just words but also illustrations could be fanciful. Note that most of the streets coming off Racecourse Road have changed names as did hundreds of Brisbane streets by the late 1930s. See Renamed places in Queensland. In the local sketch, landmarks, include the racecourse, hotels (3) and prominent citizens’ residences. The parish name, portion and allotment number make the land easier to trace.

Formerly known as Dobson’s Paddock, the Hamilton Estate is promoted in a detailed advertisement. Brisbane Courier 25 May 1887 p8 as ‘well known to be the best of all the Suburbs of Brisbane, and abounds with the villas of numbers of our leading Professional and Business men and others.’

Use estate maps to understand the time and place of where you and your family settled.
Check Trove historical newspapers to find advertisements and references to residents.
Find maps at Lands Mapping and Surveying