Although it’s difficult to appreciate now, when I first started to research my family history in 1987 there was no internet. Family history research was a much slower process; when we contacted people, we sent letters by post and waited patiently for a reply. If we wrote to someone overseas, we would buy International Reply Paid coupons so there wouldn’t be anything preventing a reply. If we ordered a certificate, we had to wait several weeks before they arrived. We scrolled through miles of microfilm in the hope of finding the record we were looking for. One of the benefits of this way of researching was that we had ample opportunity to analyse the information we received and plan our next step; in many ways we were more focussed. Nowadays we often do things quickly and move on to something else if that draws our attention. 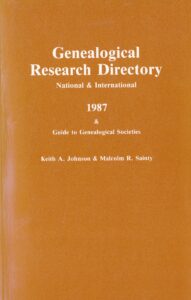 I have recently been working my way through some folders where I had filed copies of correspondence and all sorts of other stuff from the late 1980s/early 1990s with a view to scanning what I wanted to keep and disposing of the rest. The exercise was quite enlightening. Some items brought back memories of ‘how things used to be done’ and others have made me realise that there are areas for research that I’ve not looked at for many years. 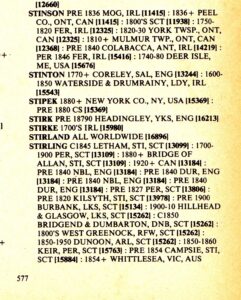 I started my research with my paternal line and this was all in the UK. On the advice of my tutor at an introductory course at GSQ I checked the annual volumes of the Genealogical Research Directory edited by Keith A. Johnson and Malcolm R. Sainty to see if anyone else was researching the same surnames. I have found a copy of the 1987 volume on my own bookshelf. Surnames were listed alphabetically with a numerical code for the person who had inserted the listing. You can see from the image that more people were searching for the surname Stirling rather than my own surname Stirland. It was possible to be specific about places and timeframes or very general. I adopted a scattergun approach in my 1987 entry which perhaps displayed how much of a novice I was. Nevertheless, over time I did connect with other researchers who were very helpful in pointing me in the right direction and suggesting a variety of resources that might help.  The GRD is no longer available in print format.

I had kept copies of all my typed letters and the responses I received. One  item I discovered was a blue aerogram – for the uninitiated, these were flimsy lettergrams, purchased at a local post office and were a cheaper option for international correspondence. No enclosures were allowed.

This 1987 letter was about my possible connection to a John Pickering, a bailiff at Stanton Colliery in South Derbyshire and his role in an accident which led to the death of two miners. This letter arose from an entry that I submitted to the Derbyshire Family History Society newsletter. Pickering is a very common name in that local area so it can be quite difficult to piece all the different families together. The writer made reference to an unpublished local history and she provided two extracts from that manuscript.  I believe that this John Pickering is related to me and have belatedly decided to follow up on a lawsuit mentioned in the manuscript.

This John Pickering provided a potted life history from when he started work at 8 years old until his current age of 42 years; he listed all the collieries at which he’d worked and for how long. This was not only fascinating in providing a detailed life history of this potential ancestor, but demonstrated how coalmining developed in this area.

Another gem found in my files was given to me by a former work colleague. This was a chapter from a book on the Royal Australian Navy in WW2. I was interested in RAN ships as my dad, who was serving in the Royal Navy (RN), told me he was picked up by an Australian ship when his own ship was torpedoed in the Mediterranean. He had kept a cap ribbon with the name of the ship which I had seen in my parents’ house. This book chapter tended to validate my dad’s stories about sailing through the Suez Canal and travelling as far south as Sumatra. I have a photo of him in Durban, South Africa in December 1941, so he had obviously travelled quite far. No official records have been located either with the RN or the RAN. However, this would be another avenue of research to follow up.

Few gems have been revealed from these folders for my maternal ancestry, which perhaps reflects where my interests lay when I first started out. I did correspond with Norwegian-American associations and the Brooklyn Historical Society in New York, however. I have a chapter from a book about Norwegians in New York, which I need to re-read. The recent release of New York City vital records has enabled me to confirm that my grandfather was the only child of my great-grandparents born in that city, despite being recorded with a different first name. 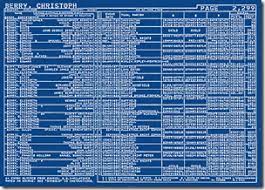 Looking back once again at the way that things used to be done, I had numerous print-outs from the International Genealogical Index (IGI) of the Church of Jesus Christ of Latter Day Saints. The majority of these records are now incorporated into the FamilySearch website. At the time, the Church was the only organisation that was filming church records and making these freely available to all. GSQ had microfiche copies of the indexes which were categorised by country, county and surname. We could order microfilms of the relevant parish records from the LDS Church and then scroll through them to find the specific entries we were looking for. We are so fortunate nowadays that this material is available on the familysearch.org website; not all is indexed so there’s a sense of dejà-vu when browsing through the images online.

Working my way through these folders made me realise how far I‘ve come in my family history research and how technology has significantly enhanced the research process. Fundamentally, however, a common principle still applies: test your assumptions/hypotheses by thorough research and record what you find; you may not find the answer that you want, but family history is what it is.  Also take the time to revisit your earlier research – new records are becoming available on a regular basis and you just may find the answer you were looking for.