The sixth child of William Jennings White and his wife Mary made his appearance on the last day of January, 1823. The couple baptised this baby Henry in the Bletchingley Parish church on 2 March 1823. William Snr was a cordwainer and the family lived in one of the Stychens Cottages in Stychens Lane on the left as you enter the village from Redhill direction. 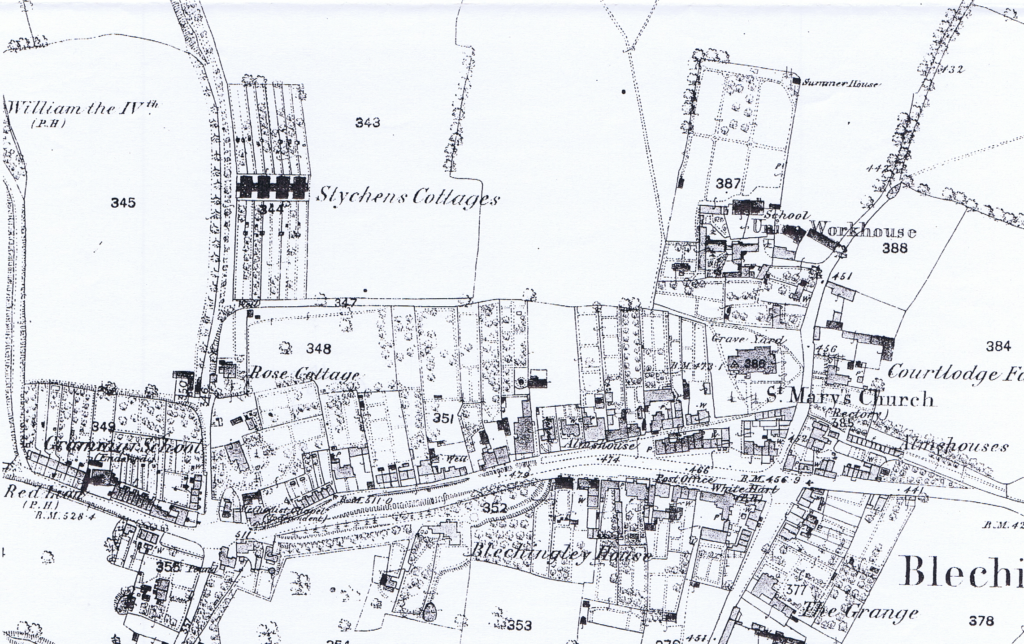 These cottages were built by by John Perkins, the local land-owner, in Henry’s words ‘so the Women could talk together without going outside’. They were built in a row of four with another four cottages back to back with fields facing each row. Today, the lane is beautiful and green with high hedges and overhanging bushes as you enter it. However, there’s no visible sign of the cottages remaining.

With the village surrounded by farms, it’s no surprise that Henry worked as a child labourer at harvesting times. In later years he remembered that he used to plant beans and peas with the other local children, a job which gave him backache. At other times he helped his Grandfather Roffey cutting hay into trusses for market, after which they would go to the ‘Big House’ for beer. 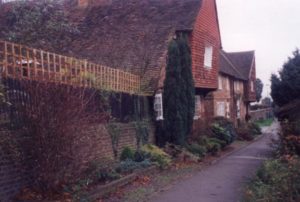 By the early 1840’s, when he was just under 13 years old Henry White had left home on Christmas day to find employment in London. From his brother, William (Jnr)’s diary, I learnt that this younger generation frequently made the journey to and from Bletchingley by train. Going south to ‘home’ they would alight at Caterham and walk down the hill whereas going back to London they’d walk down to Redhill and catch the train there. At about 3½ miles from each station, life in that era involved lots of walking.

Some eleven years later on 7 November 1847 Henry married Mary Geary at St. Marys Church, Parish of St. Marylebone, Middlesex. This church is in central London, just a few blocks north of Buckingham Palace. At the time of the marriage, Henry, a bachelor, was a servant with his residence shown as ‘of St. Mary’s District’. This was also where Mary Geary lived. Mary’s father is listed as James Geary, and Henry White’s father is listed as William White.

It would appear that the couple were living with Mary’s parents in 1848 when their first child, Henry was born and baptised at Islesworth Parish church. Arthur and Lucy were born at Poplar in 1850 & 1852 followed by George at Limehouse in 1857. Poplar and Limehouse were both densely populated inner London suburbs, and a huge change from the surroundings where both Henry and Mary had grown up. 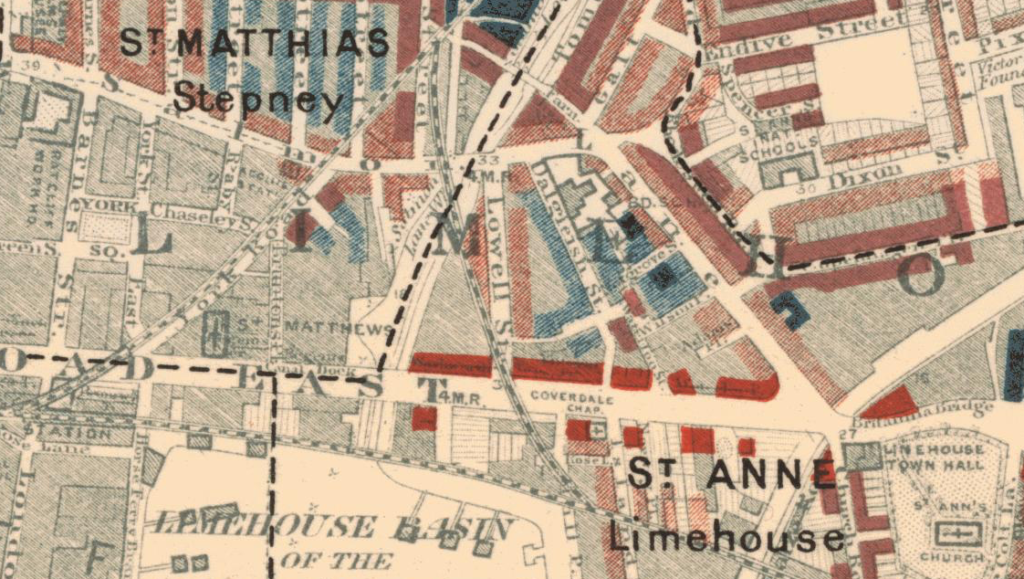 The White family lived in Salmons Lane, Limehouse in 1851. This is from Booths Poverty Maps cc1895

With a hope of finding a much better life, my great-great grandparents left the drudgery of London’s East End to start their new life in Australia. The family emigrated to Sydney arriving on 4 October 1857 on the ship Light of the Age as assisted immigrants. On the shipping records Henry is shown as being a ‘Rough Carpenter’ 33 years old and Mary his wife was 32 yrs old. Their children on the voyage were Henry 9 yrs, Arthur 7yrs, Lucy 5 yrs and George 11mths.

The shipping records show that Henry’s parents were William & Mary White (father deceased) residing at Bletchingley. Mary’s parents are listed as James and Mary Geary residing at Twickenham. The family religion is shown as Church of England with no relatives in the Colony, and with both Henry and Mary being able to read and write, an uncommon ability of ‘common’ folk at this time. Of their children accompanying them, only Henry was old enough to be able to read.

Following their arrival in the Colony the family appears to have originally spent some time in the Campbelltown area of Sydney as their next child, Elizabeth Ann White was born there in 1859. The call of gold then beckoned Henry, as their next child, Rhoda was born two years later with her birth registered at Braidwood in 1861. The Braidwood region was a gold mining area, in 1852 it took 3 months by bullock team to go from Sydney to the Braidwood goldfields, as there were no inland roads, and many floods along the way. Most miners travelled by ship to Broulee then onto Braidwood by walking overland, crossing the Due River and Araluen Creek some 30 to 40 times on the journey.

Two years later in 1863 my great-grandfather, William White was born on the goldfield at Nerrigundah and his birth registered at the coastal town of Broulee. The birth certificate confirmed that Henry and Mary had three sons and three daughters living at the time of Williams’ birth.

Having decided to try his luck at Araluen the family once again travelled west over the ranges. A letter written later in life by their father disclosed that he’d broken his right leg when staking one of his claims in 1867. Mary was to have two more children, Charles in 1865 and Alice Mary in 1871 with their births registered at Braidwood. Mary was 47 yrs old by this time, and she had borne nine children running in ages from the 23 yrs old Henry (Junior) to the newborn Alice. 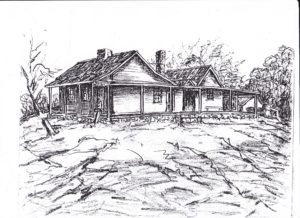 Rosedale Cottage, Mongarlowe. Sketch from Braidwood Historical Society. Thanks to distant cousin Grant for passing onto me.

By this time Henry had discovered enough gold nearby to be able to buy the family a cottage and land in Little River, a locality which is today known as Mongarlowe, just east of Braidwood. Henry named his property ‘Rosedale’ and it was on the outskirts of the village area. Henry would have gained a sound knowledge of growing produce during his days in London visiting his father-in-law, James Geary a market gardener, and at Rosedale he established an orchard with many fine English fruit trees.

One by one the family siblings left their home and moved to Sydney with the exception of Charles, and Alice. In November 1897 Henry wrote the first of two letters to his birth village of Bletchingley in Surrey. In the first letter he advised that he’d had a narrow escape from death on the 16 April 1896, when his horse and cart went over into a cutting on the road from Braidwood to Mongarlowe. The cart fell down 10 or 12 feet onto a rocky bottom coming home, with Henry’s right hip and leg taking the force. He then was a cripple for the rest of his days with that leg shorter so he needed to walk with a stick. 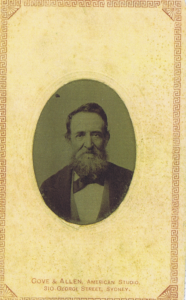 Henry also wrote that his farm had suffered from a serious drought with very little rain for the past 3 or 4 years. This resulted in a loss of many sheep and about one third of his cattle. It was necessary to water his crops of potatoes, beans, flowers and other garden produce, resulting in a worry about how long his supply of water in the well would last.

The purpose of his initial letter to the Bletchingley Post Master had been to request proof of his baptism. He obviously received this as he then wrote another letter on 7 April 1898 enclosing a small piece of gold in appreciation. In both letters he asked about many of the local Bletchingley inhabitants, both family and friends, asking if they were still alive and in good health. Up until his elder brother William’s death in 1870 he had always received regular news from the home front. From the letters I was able to find out so much more about my White family and as a family historian, these two letters were a fabulous find in the Surrey History Centre. 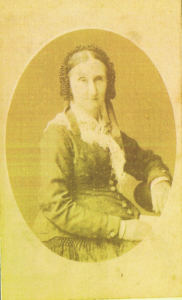 Henry and Mary White both survived into the next century with Henry passing away of aneurism of the aorta and sudden haemorrhage on 24 February 1906 in his home at Mongarlowe. The informant on his death certificate was his son Henry who lived in Braidwood. Henry’s occupation is listed as Orchardist, age 83 years and his parents as William White, Shoemaker and mother Mary. Henry was buried on 26 February 1906 in the Presbyterian Cemetery at Mongarlowe.

His widow Mary’s death certificate shows she died on 17 June 1908 from Chronic bronchitis (duration 10 years), Brights Disease (duration 5 years) and Senile Decay. She was 84 years of age and listed as being the daughter of James Geary, Market Gardener and Mary (maiden name Neville). Mary was also buried in the Mongarlowe Presbyterian Cemetery but today no tombstones exist for the couple. The couple’s farm at Mongarlowe was left to their unmarried youngest daughter, Alice.

Their son William White, is my great-grandfather who was the husband of Euphemia Brown Webster mentioned in my last blog about the Websters of Dunino, Fife. (My Webster blog) William White will be the subject of my next blog due in August.

View of one of Henry’s allotments at Mongarlowe. Looking east towards the Budewant Ranges. Photo by editor 2011.