I continue to hear fellow family historians say that they won’t bother searching early Queensland Electoral Rolls because they believe their ancestor was poor so didn’t own property, and therefore wouldn’t have been able to vote.

So a very valuable resource is being ignored because researchers do not realise that residence (generally for six months) was a qualification our male ancestors could use to vote. The residence qualification has been very useful in tracing one of my early Queensland families. 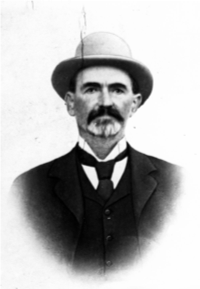 In 1862-63, Richard Skuthorpe (1817-1880) {2} – written as Skeethorpe – was listed on the Queensland Electoral Roll for the Maranoa District as a leaseholder of Mooreby (later Mooraby) [1]. His eldest son William (1837-1922) {3} – again as Skeethorpe – was on the roll as a leaseholder of Gootha (later changed to Tootha). The following year Richard Skuthorpe (c. 1791-1880) {1}, the first Richard Skuthorpe[2] in Australia, joined his son and grandson on the roll as leaseholders on Murraby (Mooraby). It is doubtful that Richard, senior {1} at 72 years old spent much, if any time on these Queensland properties.

This situation of electoral qualification through property in Queensland seems to have continued for this family through the 1860s as far as can be determined with the few surviving electoral rolls. However, during the 1870s as more men of the Skuthorpe family moved from their birthplace in the Hawkesbury District in New South Wales to pastoral Queensland, the situation changed.

By the mid-seventies, Charles Skuthorpe (1853-1898), son of Richard {2} arrived in Queensland to become an elector with residence as a qualification, first in the Maranoa District and, as the brothers moved further north, on Mexico station in central Queensland. By the time the family had taken up leases in the far west, Charles became a leaseholder on the 1878 and 1879 rolls on Urbana and Herbert Downs on the Diamantina River as well as Mexico station. His brother, Henry (1855-1937) was enrolled as a leaseholder of Urbana and as either leaseholder or resident on Mexico until returning to North Richmond in the Hawkesbury.

While it is not clear that Richard {2} moved further north, it is clear that his son Richard (1843-1920){3} –  sometimes as Richard T or as Richard Tertius – did travel to both central and far west Queensland, enrolling most often as  a leaseholder  from 1879 to 1889.[4] Like some of his brothers he returned to live in New South Wales while remaining on Queensland electoral rolls as a leaseholder.

A fourth son of Richard {2}, John Skuthorpe (1849-1914) {3} (JR or John Richard to distinguish him from his cousin, John Thomas), occasionally appeared on these early Queensland rolls as a resident.

Not all of the early rolls have been indexed. However all remaining original rolls are available on microfilm at Queensland State Archives.

While not always sufficient to clearly identify which of the cousins of the third Skuthorpe generation in Australia was being referred to, these entries in electoral rolls from the 1860s to the 1890s have been of great assistance in locating the whereabouts of family members whose given names were repeated across generations and cousins. With additional support from other sources, particularly newspapers, their activities have been revealed.

The qualification of residence allowing men to vote is not only helpful if your ancestors were involved in pastoral industries – drovers, shearers, stockmen, but also if they were among the many men who built the extensive rail network across Queensland. A great source to track immigrant single men in the years before they married and settled in one place!

[2] In this blog, the spelling of Skuthorpe with the final ‘e’ will be used although the family men also appeared on Electoral Rolls as Skuthorp.