Do you get sidetracked reading old newspapers? Is Google your friend? Does this eat up your valuable research time?  I know it does for me, I get lost between those black and white lines.  BUT sometimes you hit the jackpot.  This is what happened to me recently when I was looking for information on my Great Uncle – Robert Seymour Reid.

Robert was born in Beechworth, Victoria on 9 June 1873[1] to Patrick Reid and Amy Sophia Freame.  Patrick, a banker arrived in the Colony in 1864 from Wick, Scotland and was sent to Gaffney’s Creek in the Victorian goldfields to open a Banking Chamber. (Apparently he knew Ned Kelly, when that notorious scoundrel was a boy[2]). The family eventually settled in Prahran, Melbourne where Patrick was Manager of the Prahran Branch of the National Bank.

Robert was one of 7 children and a brother to my Grandfather, Eric Sinclair Reid.  Basically, this was the extent of my knowledge regarding Robert.  However, a search for Robert Seymour Reid on Google revealed quite a surprise!!

An article appeared in the Scotch College Magazine, Great Scot, dated September 2016 titled Robert Seymour Reid Trophy comes home.  The article revealed that Robert won the Old Collegians’ Cup in 1892 at Scotch’s annual sports meeting and the trophy was found in a Roseville junk shop.  It was collected and returned to the College in December 2015. The College archivist had written a short story on Robert which also revealed a few more details of Robert’s life.

Below is a copy of the article as it appeared in the College magazine.

Robert Seymour Reid was born on 9 June 1873 at the Oriental Bank, Beechworth, and attended Scotch from 1888 to 1890 while living at the National Bank, Bridge Road, Richmond. These addresses indicate that his father worked in banking.

Although Robert did not make his mark on any of the few available sports at Scotch in the 19th century, on 18 November 1892 he made his way to the MCG for Scotch’s annual sports meeting (now known as Family Day). The events included the Old Collegians’ Races for 100, 440 and 300 yards. 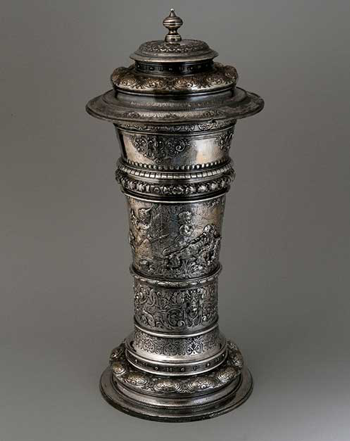 On 21 October 2015 Old Boy John Wisely (SC 1956-65) contacted Scotch to advise that he had found the trophy in a Roseville junk shop near his house in Sydney. Negotiations commenced, and in December 2015 the trophy was collected by Elizabeth Lane, mother of Richard Paton (SC 1988-99) and brought to the Archives, where Elizabeth is a volunteer. Not only did she collect the trophy, she also donated it to Scotch, for which the Archives is very grateful.

Elizabeth also arranged for the trophy to be cleaned. This revealed markings that showed it was made by the Wurtemberg Metalware Factory in Germany. The trophy is adorned with cherubs in a variety of hunting scenes with dogs, spears, a gun, and a hunting horn being sounded. Around the base are many hares: no doubt the intended quarry. It is an extraordinary looking trophy that is quite unlike anything else in Archives’ collection.

What became of Robert Seymour Reid? He married in a shotgun wedding to Clara Winifred Heller in Queensland on 28 October 1909, and their daughter, Mary Reid, was born in Queensland 16 days later. Robert, though, never saw his daughter, as he died at Stanthorpe, Queensland, on 29 October 1909 – the day after his wedding. The circumstances of his death are not known, but, with a child on the way and dying the day after his wedding he may have wanted to do the ‘right thing’ before his imminent death from an illness.

The combination of the keen eyes and generosity of the Scotch Family ensured his place in Scotch history is remembered through his trophy.

I had so little information about Robert and this story was a gold mine for me.  From it I learnt Robert had married Clara Winifred Heller[4] the day before he died and he was living in Stanthorpe, Queensland.  Clara was pregnant and gave birth to Mary Reid[5], their daughter 16 days later.  I found it amazing that a brick wall could be broken from a simple search on Google.

Further discussions with Paul Mishura, (the Archivist at Scotch College) revealed that Robert was the only Reid son who attended Scotch College and he enrolled on 17 September 1888 and left in December 1890.  His parents were listed as Patrick and Amy Reid of The National Bank, Bridge Road, Richmond Victoria.  Confirmation indeed that this was in fact my great uncle.   The trophy still has pride of place in the trophy cabinet at Scotch College.

An interesting fact to add to the story is Robert’s sister, Emily Freame Reid who married Donald Thomas Esplin, (a well renowned architect in Sydney). On the 1913 Electoral Roll they were living in Willoughby, a close suburb to Roseville and the junk shop where the trophy was found.  Donald and Emily died in 1960 and had lived in the area all their lives. Maybe surviving relatives didn’t realise the value of the trophy and it was given to the junk shop when their estate was settled.

My search continued, I was intrigued to know why Robert married Clara the day before he died and who she was.  From the 1909 electoral roll, I found Clara Winifred Heller living in Toowoomba and her occupation was listed as nurse.  Was she nursing Robert, and what was his cause of death? His death certificate told me more. He was a commercial traveller, he died of tuberculosis and heart failure and his attending doctor was Dr Helen Shaw.

A search of Google revealed Dr Helen Shaw established a Tuberculosis Sanatorium at Stanthorpe in March 1918.  The cool dry climate was valued as an aid to health from the early nineteen century especially for those suffering from tuberculosis or chest conditions.  Following the First World War, Stanthorpe was a major resettlement area for soldiers recovering from mustard gas exposure.  From this research, I became aware of Deborah Wheeler and her book about the Sanatorium named Kyoomba, which chronicles the hospital’s history.  Once again I fell down the rabbit hole that is Trove and time stood still for me. 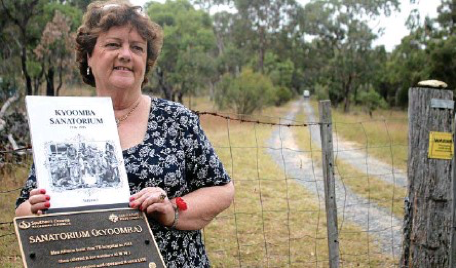 Deborah Wheeler with her book on Kyoomba Sanatorium

Deborah has written two books about Kyoomba Sanatorium. In a jointly funded and supported initiative of the Stanthorpe RSL Sub-Branch and Southern Downs Regional Council, the books detail the operational aspects of the hospital, personal details of soldiers who attended together with the doctors and nurses who treated them (including Dr. Helen Shaw).   Deborah also photographed graves in the Stanthorpe Cemetery and had in her collection a photograph of Robert’s grave. 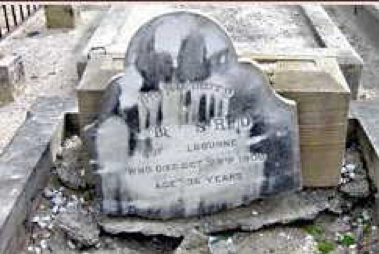 I contacted Deborah in the hope some of her research included details of patients who were treated for tuberculosis in the early 1900’s.  While she could confirm for me that Dr. Helen Shaw was certainly at the forefront of tuberculosis treatment in Stanthorpe and the Downs, she alas had no records pertaining to that time.

What became of Clara and Mary?  Baby Mary’s story is an interesting one.  A search of QLD Registry records revealed Mary’s birth registration was in 2 names.  Mary Reid and Agnes Dorothy Mary Vollenweider.  This threw me for a while until I had a copy of Mary’s original birth certificate and listed on the side was a notation. “The child referred to herein has been adopted by Albert and Margaret Louisa Vollenweider who intend that she shall hereforth be known by the names of Agnes Dorothy Mary Vollenweider” Signed Registrar General 16.9.10.  Clara had given Mary up for adoption in 1910.  Albert Vollenweider also holds a place in Queensland’s history, but that is a story for another day! 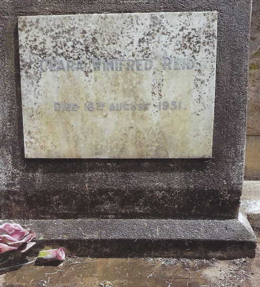 Clara Winifred Reid died on the16 August 1951 (age 75) in Brisbane, Queensland[6] and is buried in South Brisbane Cemetery, Dutton Park. Recently, we had the privilege of attending a cleaning headstone session at the cemetery, hosted by Friends of South Brisbane Cemetery and found and cleaned Clara’s headstone. It seems Clara never remarried and was living with her sister, Emilie and Emilie’s husband Thomas O’Flaherty in Fortitude Valley Brisbane at the time of her death. 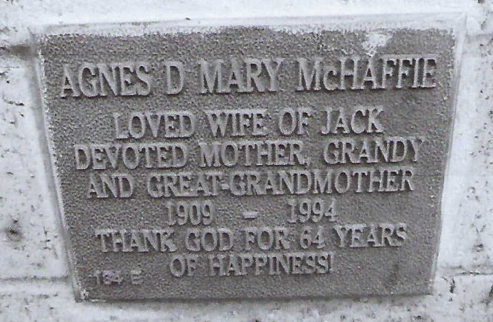