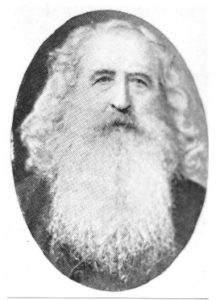 One of the first things I learnt about my great-great-grandfather, John Kennedy Donald, was that he came to Ipswich in Queensland as the first traffic manager on the Southern and Western Railway. I soon discovered that he arrived on the Commodore Perry, which anchored in Moreton Bay on 30 June 1865 after 100 days sailing from London.

His family followed in two groups; first, daughters Mary Morrison and Eliza Donald and granddaughter Mary Morrison, whom J Kennedy met in Brisbane on 13 March 1866. Their voyage on the Sultana took 115 days. They were followed by J Kennedy Donald’s wife, Jane nee McEwan, with daughters Jane Kennedy, Madeline, Jessie and Margaret and sons Robert and William, on the Maryborough, arriving on 17 August 1866.1

I found the basic genealogical facts about this family simply but this did not explain the reason for another easily established fact – John Kennedy Donald did not retain his position as Traffic Manager for very long. The answer to this question took longer to establish. It required learning about what brought him to Queensland and about the other men employed at the same time. This more detailed study did reveal so much more about my ancestor.

The Queensland State Archives (QSA) was the best starting place to learn about the scheme under which the Queensland colonial government employed administrative staff for the new railway system. Government gazettes and newspaper articles helped to fill some gaps. 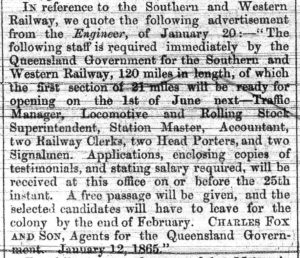 Sir Charles Fox, based in London and acting as agent for the Queensland Government, advertised on 12 January 1865 to fill ten positions2. He received about 700 applications and chose the most eligible for interview before making his selection. The men were expected to be ready for departure before the end of February. Little wonder that J Kennedy Donald (as he generally signed himself) was not accompanied on the voyage by his large family.

Of the six men appointed to classified positions, my ancestor was the only Scot. The others were Englishmen Thomas Battershill, appointed as accountant, John Frederick Lewis (Fred) Jetter as locomotive superintendent, Charles Clay and William Furley as clerks and John Scorra as station master at Ipswich. While Jane Jetter remained in England, Abigail Battershill, Elizabeth Clay and Emma Furley accompanied their husbands. There were no children with the couples travelling as saloon passengers on the Commodore Perry.

Collecting family details of this group was helpful in my gaining a greater understanding of the circumstances of J Kennedy Donald’s early dismissal from his position. Not only was he the only Scot among the group, he was also older than the other men. On the voyage he came into conflict with the man with whom he would have to work most closely, Thomas Battershill, over the running of the ship’s journal. They also disagreed over a letter of complaint Donald had written to the Surgeon Superintendent. This was not a promising beginning to their working relationship in the Ipswich railway office.

At a complimentary supper granted to ‘Mr J K Donald’ before his departure from Glasgow, he was toasted for his ‘known abilities as a businessman, of wide and long experience in railway management’3 . Sir Charles Fox’s statement read in part ‘nothing can be more satisfactory than this Gentleman’s testimonials’. John Kennedy’s employment for Queensland’s new railway does not appear to bear witness to these testimonials.4

Thomas Battershill’s absence from the office for a week in December 1865, without what J Kennedy Donald considered sufficient explanation, led to Battershill’s suspension and demotion to station master at Grandchester where he was again in trouble with Donald for not providing daily and weekly returns of the station’s receipts5. Donald also came into conflict with other railway employees, including Phillip Williams who had arrived under the scheme.

He was himself demoted within 18 months – in October 1866. Unfortunately official correspondence relating to this demotion has not been located; so what general comments can be made? Sir Charles Fox’s choices for appointment to the higher offices in the Southern and Western Railway were foiled by an apparent mutual dislike held by the appointees, Donald and Battershill, who seemed to be consumed by arrogance and jealousy. In addition, they brought with them procedures and expectations of different British railway systems.

John Kennedy Donald was station master at Oakey Creek and Clifton from 1870 to 18736. What work he did between 1866 and 1870 is still a question. The government was unlikely to dismiss either of these two men because their contracts included a clause that return fares to England had to be provided if they did not serve their three year term.

To understand more clearly J Kennedy Donald’s role in the Queensland Government’s scheme, it has been important to evaluate the success of the other men chosen by Sir Charles Fox. After Donald’s demotion, Thomas Battershill was appointed Clerk in the Traffic Department in Ipswich and rose to become Traffic Auditor in 1873. When he resigned in 1890 at 65, he had served Queensland railways for 25 years.

From the beginning Fred Jetter worked separately from the other men as superintendent in the Locomotive Department. He played an important role in managing technical aspects of the engines and rolling stock imported from England. He left Queensland after only 4½ years as his wife was unable to bear Queensland’s summer heat. She had arrived in Queensland, with their daughter a year after her husband. She bore two more children in Queensland before leaving with her husband who took up a similar appointment in Launceston, Tasmania.

The other classified men – the clerks and station master provided contrasting levels of service to Queensland rail. Thomas Clay worked in Ipswich and Brisbane before he was appointed to the Queensland Agent-General’s Office in London. In all, he served the Colony for almost 20 years. His colleague, William Furley was arrested and charged in April 1869 for stealing moneys from the Railway Department. Found guilty, he was sentenced to three years’ penal servitude. On release, he and his wife, Emma left Queensland for Sydney. John Scorra, appointed as Ipswich’s first station master rose through the ranks to become Pay Clerk and Station Auditor, based in Brisbane. Sadly, he died in office in 1879. Sarah, his wife, whom he married in Queensland remained here and was buried with her husband in Toowong Cemetery.

The unclassified employees also served varying periods of service. Despite John Kibblewhite being praised for his service as foreman porter, he left the service soon after his contracted period had ended. The length of Phillip Williams’ service as porter is not known but he was threatened with dismissal in 1866 after his disagreement with J Kennedy Donald7. His name hasn’t been found in Queensland records after this time – perhaps he did not complete his contract and had his fare paid for a return to England.

Alfred Lemond and William King completed their contracts; William King remaining with the railway department for about 16 years. He then selected land at Goombungee and the descendants of the five children of William and Hannah King remain living in the State.

This scheme to employ early railway administrators in Queensland had mixed success and was not repeated for other railway lines.

Great-great-grandfather leaves the railway
On the personal side it appears that J Kennedy’s accommodation before his family arrived was in a boarding house with some of the other single railway employees in the group of ten. The reported tendency of intemperance was linked to this situation and to the conviviality associated with the Caledonian Lodge in Ipswich, of which he was the Foundation Master in February 18668. 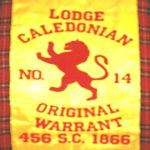 In September 1876 J Kennedy Donald was appointed as the first permanent secretary of the Queensland Woollen Manufacturing Company at Ipswich. In July 1878 he became the Ipswich Sub-Agent for the old firm, North British and Mercantile Insurance Company and was still representing the firm on the Ipswich Fire Board in 1887. During the same period he spent time in a voluntary role as Secretary of the Ipswich Fire Brigade9.

John Kennedy died in March 1890 aged 76 years and was buried with masonic honours.

Putting this piece of my family history into the broader context of early Queensland railway history and his involvement in the Ipswich community has provided some understanding as to why John Kennedy Donald lost his position as Traffic Manager so quickly. Added to personal and family details it provides a much more complete picture of my ancestor.